The Letter of Paul to the Galatians Online Commentary (18) 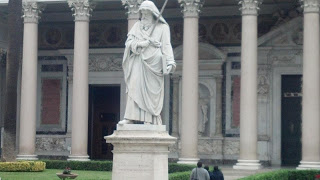 In the first entry in the Bible Junkies Online Commentary on Galatians, I discussed introductory matters concerning the founding of the churches to the Galatians, the situation when Paul wrote to them, when the letter might have been written and the type of letters which Paul wrote, based on the common Greco-Roman letters of his day. In the second post, I considered the basic content and breakdown of a Pauline letter. I noted the major sections of the formal letter structure and, in the context of each section, outlined the theological and ethical (as well as other) concerns of Paul, including some Greek words which will be examined more fully as we continue with the commentary. In the third entry, I looked at the salutation, which is long for Paul’s corpus (only Romans 1:1-7 is longer) and briefly commented on the lack of a Thanksgiving, the only letter of Paul’s which does not have one. The fourth entry discussed the opening of the body of the letter, a significant part of the letter especially in light of the absence of a Thanksgiving. In the fifth entry, I examined the beginning of the opening of the body of the letter, in which Paul describes his background in Judaism and I placed this in the context of Judaism in the Hellenistic period. In the sixth post in the online commentary, I continued to look at Paul’s biographical sketch of his life, this concerning his earliest life as a Christian. In the seventh post, I examined what Paul says about his subsequent visit to Jerusalem to see the apostles and the Church in Jerusalem. In the eighth entry, Paul confronts Cephas about his hypocrisy in Antioch.

The ninth blog post started to examine the theological argument in one of Paul’s most important and complex theological letters. In the tenth entry, Paul makes an emotional appeal to the Galatians based on their past religious experiences and their relationship with Paul. In the eleventh chapter in the series, Paul began to examine Abraham in light of his faith. The twelfth blog post continued Paul’s examination of Abraham, but also claims that Christ “redeemed” his followers from the “curse” of the Law.  In the thirteenth study in the Galatians online commentary, we looked at Paul’s claim that God’s promises were to Abraham and his “offspring,” with a twist on the meaning of “offspring.” The fourteenth entry examined Paul’s question, in light of his claims about the law, as to why God gave the law. The fifteenth chapter in this commentary examines the function of the law, while the sixteenth post studied how the members of the Church are heirs to the promise.

In the seventeenth entry, I observed what it means to be an heir in Paul’s theological scenario. And in this, the eighteenth installment, Paul will begin to transition back to his relationship with the Galatians, but before concentrates on this in full, he returns to the issue of the stoicheia, commonly known as the four cosmic powers, earth, air, water and fire.

8 Formerly, when you did not know God, you were enslaved to beings that by nature are not gods. 9 Now, however, that you have come to know God, or rather to be known by God, how can you turn back again to the weak and beggarly elemental spirits? How can you want to be enslaved to them again? 10 You are observing special days, and months, and seasons, and years. 11 I am afraid that my work for you may have been wasted. (NRSV)

In the previous entry, the seventeenth, I claimed that the “stoicheia generally is thought to refer to the four elements of the world – earth, air, water and fire – which were worshipped or considered by some in Paul’s day as gods. If the Law of Moses is not here being considered as pagan gods, it seems that such cosmic powers functioned as the equivalent of the law prior to the coming of Jesus in Paul’s understanding. It is hard to believe many faithful Jews of Paul’s day found this an acceptable equivalence.” The stoicheia is mentioned in Galatians 4:3 and is taken up again in the following verses, in which the equivalence between the cosmic elements and the Law of Moses is even more pronounced.

Hearkening back to when the Galatians were not worshipping the God of Israel (“formerly, when you did not know God”), Paul characterizes this time as being “enslaved to beings that by nature are not gods” (Galatians 4:8). The NRSV provides a good translation of the Greek, which speaks of the “gods” as “by nature” (physei) “not being gods” (mê ousin theois). However we understand the actual definition of the stoicheia in antiquity, it is here that Paul identifies them as the whole complex of worship of gods apart from the one, true living God. It seems this is a broad enough definition to fit and reject the worship of any gods apart from the Christian understanding of God.[1]

Since, Paul now asks, “you have come to know God, or rather to be known by God, how can you turn back again to the weak and beggarly elemental spirits? How can you want to be enslaved to them again?” (Galatians 4:9). A comment on the Greek and then to the meat of this fascinating verse. I would translate the first part of this verse slightly differently, “you have come to know God, buteven more (mallon de) to be known by God,” stressing that the Galatians do know God, but even more God knows them. The NRSV translation intimates that it is better to say that God knows them but they do not know God; this is not the case. Paul wants to stress that as the Galatians are children of God, no longer “infants” (nêpioi), they are in a relationship with God, who knows them and who they know also, so why would they give up this relationship to re-enter a relationship with the “weak and beggarly (ptôcha, “poor”)” stoicheia?

It is a terrific question, especially in light of the family imagery Paul has drawn, but the reality is that the Galatians want to follow the Law of Moses not the stoicheia. Can it be true that Paul sees the stoicheia as not just the equivalent to the Law of Moses but the same thing as the Law of Moses? This is an amazing claim and one that does not square with Paul’s understanding of the law as given by God as part of the promises to the children of Abraham and Israel, though limited in function (see here and here). The Law was, however, given by God for the purpose of being followed, though the stoicheia, created by God, were never intended to be worshipped as a part of God’s purpose.

In Galatians 4:10, though, Paul gives a bit more context, “you are observing special days, and months, and seasons, and years,” which may help to explain his claim. Richard Hays, in the notes to the Harper Collins Study Bible, says that “Paul characterizes the Galatians’ interest in Jewish law as a return to bondage equivalent to their state as pagans. Perhaps he sees a parallel between the pagan worship of natural elements (stoicheia, v.9) and the belief that Israel’s liturgical calendar (days, months, seasons, years, v.10) regulated human religious observance in harmony with the divine ordering of the heavenly bodies (Jubilees 2.9; 1 Enoch 82.7-9)” (1978).  This, it seems to me, is an excellent observation and the one that makes the most sense of these verses, but it still does not make a lot of sense in light of the origin of the Law of Moses. In fact, these verses might be a sign that Paul has, in modern parlance, “lost it” with the Galatians and logic has deserted him. It is the kind of argument that makes it clear that Paul is no longer Jewish in the way he was prior to his encounter with the Risen Lord: no observant Jew could say such a thing about God’s law.

That Paul has indeed offered an emotional more than a logical argument might be best seen in Galatians 4:11, where Paul blurts out, “I am afraid that my work for you may have been wasted.” Is this not known in parenting parlance as a “guilt trip?” It begins a shift to the emotional appeal of the next verses, in which Paul draws upon his relationship with the Galatians and leaves theology behind for a while.

Next entry, Paul makes an emotional appeal to the Galatians.

This entry is cross-posted at America Magazine The Good Word

[1] I put it this way,the Christian understanding of God, because Christians did not have a defined sense of the “Trinity” at this time, but yet certainly understood the divine activity of the Holy Spirit and included Jesus within their worship. See Larry Hurtado, Lord Jesus Christ (Grand Rapids, Mich.: Eerdmans, 1998).