Howe's 'Battle Hymn' and the paradox of freedom 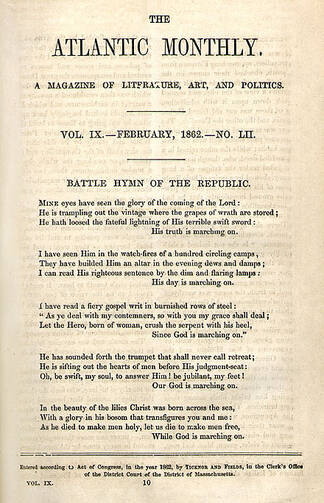 Is it possible to dream the future? Of course we do that daily, authoring our own day dreams. But what of those moments when the conscious mind rests and the utterly creative awakes? Is it all illusion, or do we sometimes see the future?

A fervent abolitionist, Julia Ward Howe regretted that she couldn’t take up arms to free the slaves. In so many ways, this 19th-century poet and writer wasn’t free herself. Her husband, Samuel Gridley Howe, was a celebrated physician, who thought that his wife should bear his children and focus her life upon his concerns.

One day, Julia watched a review of Union troops outside of Washington. They were singing “John’s Brown’s Body” a ballad extolling the executed abolitionist, who had made Kansas bleed and the nation tremble because, as he had proclaimed, God’s justice demanded the immediate emancipation of the slaves. The United States government hung John Brown, but the future he foresaw still came to pass.

I went to bed that night as usual, and slept, according to my wont, quite soundly. I awoke in the gray of the morning twilight; and as I lay waiting for the dawn, the long lines of the desired poem began to twine themselves in my mind. Having thought out all the stanzas, I said to myself, “I must get up and write these verses down, lest I fall asleep again and forget them.” So, with a sudden effort, I sprang out of bed, and found in the dimness an old stump of a pen which I remembered to have used the day before. I scrawled the verses almost without looking at the paper.

In the first moments of consciousness, Julia Ward Howe’s creativity penned what we now call “The Battle Hymn of the Republic.” Published in The Atlantic Monthly and sung to the tune of John Brown’s body, the song went viral, as we would say today, changing the war’s narrative from secession rights into a crusade for freedom.

Mine eyes have seen the glory of the coming of the Lord;
He is trampling out the vintage where the grapes of wrath are stored;
He hath loosed the fateful lightning of His terrible swift sword:
His truth is marching on.
I have seen Him in the watch-fires of a hundred circling camps,
They have builded Him an altar in the evening dews and damps;
I can read His righteous sentence by the dim and flaring lamps:
His day is marching on.
I have read a fiery gospel writ in burnished rows of steel:
“As ye deal with my contemners, so with you my grace shall deal”;
Let the Hero, born of woman, crush the serpent with his heel,
Since God is marching on.
In the beauty of the lilies Christ was born across the sea,
With a glory in His bosom that transfigures you and me.
As He died to make men holy, let us die to make men free,
While God is marching on.

Howe claimed that the song came to her on the border of consciousness, linking the Christ of long ago to the future of the war and the freedom of the slaves.

No one who preaches the Gospel can extol war. It is ever a curse and a sorrowful affliction. Yet consider the strength that Union soldiers took from this song, the consolation that Union families found in it. On June 8, 1968, as the train bearing the body of Senator Robert Kennedy rolled through Baltimore on its way to the capitol, the crowd along the tracks broke into the hymn’s refrain. I remember the song on the night of Sept. 11, in New York City. It wasn’t sung against someone; it was sung for those who had suffered a terrible injustice.

As America observes Memorial Day Weekend, the church celebrates Corpus Christi, the Solemnity of the Most Holy Body and Blood of Christ. The feast exists to foster devotion to the presence of Christ in the Eucharist. Paradoxically, pondering the humanity of our Savior is one way to see the extraordinary divine gift, which is the Eucharist.

The church professes that Christ was always “true God and true man” but that declaration doesn’t address the nature of his consciousness, his creativity. We have no interior access to the mind of Jesus, no way to watch how his divine and human natures interacted with one another. We do know that Christ possessed faith, which suggests that his incarnation represented some emptying of his divine consciousness. So our Lord would have come to that supper, the night before he died, a true man, one who had even reason for fear for his future, knowing that death was nigh.

That night Jesus did something similar to Julia Ward Howe. Seeking solace and strength in the past, he immersed himself in the faith of his people, reciting the promises made to Israel. And with radical hope for the future, the Son of Man gave himself over to the God of Israel, calling him “Father.”

When the church prays in that same voice and measure, expressing the very same surrender to the Father, we believe that Christ is truly present among us, in the mystery of his Body and his Blood, a sacramental splice between the ancient past and the, yet distant, future. By the power of the Holy Spirit, the church stands with the Son, giving herself completely into the hands of the Father. What St. Augustine said of the church singing psalms is ever truer of the church in Eucharist, “Whenever you hear the voice of the body, do not separate it from the voice of the head; and whenever you hear the voice of the head, do not separate him from the body” (En Ps 33-50, 151-152).

Still greater than the mystery of his presence in our midst is our inclusion in his offering of self. That’s why—even in a tabernacle, in a monstrance or in a pyx on its way to the hospital—the Eucharist is always ordered toward community, toward praise, toward reception of the gift and sacrifice of the self.

“As He died to make men holy, let us die to make men free.” Here is the great paradox and challenge of faith: we only free ourselves, when we die to ourselves.

Terrance Klein
Show Comments (
1
)
Comments are automatically closed two weeks after an article's initial publication. See our comments policy for more.
Bruce Snowden
5 years 5 months ago
I love the Feast of Corpus Christi, the fragrance of flowers around the altar, the elevating scent of incense, the light of many candles and the enrapturing smell of melted candle bees wax, around which if one looks closely may be seen and heard hundreds of honey bees in an adoration buzz! But most of all there is Jesus! The Eucharistic Lord seated on his Monstrance Throne of Gold, listening to the People of God at prayer and signaling with his hands to “Come closer!” All of this and unutterably more can be clearly seen using the spiritual telescope of Faith, in the simple prayer, O Sacrament most holy, O Sacrament Divine, all praise and all thanksgiving, be every moment Thine.” That’s enough! And no more need be said, the Sacred heart of Jesus and ours, beating fast in the excitement of love! However, respectfully regarding the Sacred Body and Blood of Jesus, does anyone know definitively what happened to the piece of the Baby Jesus’ Body surgically removed seven days after birth and what about the Precious Blood spilled then and also on the way to Calvary and at Golgatha itself? Those thoughts have lingered for years in my mind, complicated, if that's the correct word to use, by the words of Scripture assuring that “corruption” would not befall the Body of Christ, Son of God. Did those Sacred Elements simply reunite with the Body, grafting to the whole as God designed? Or are these questions without foundation biologically, theologically, or however? No matter, I dearly love the Feast of Corpus Christi, agreeing with the Battle Hymn Of The Republic that He did die "to make men (and women) holy," the very soul of the Feast of Corpus Christi!