On All Souls Day, may our departed loved ones be granted the final mercy. 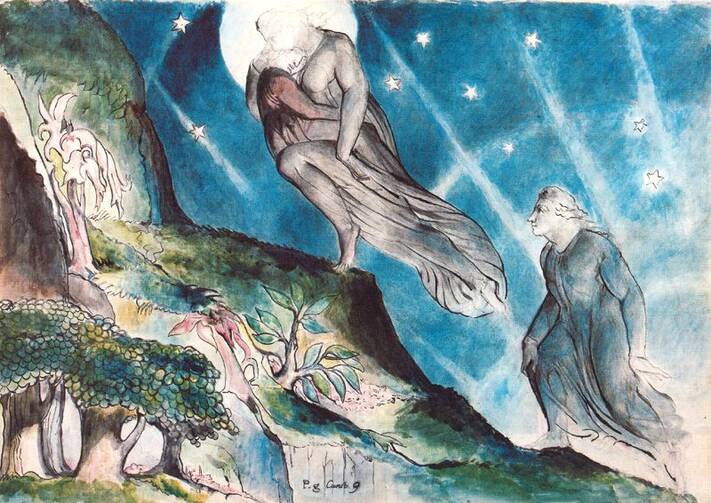 Sweet color of oriental sapphire,
Hovering in the calm and peaceful aspect
Of intervening air, pure to the horizon,
Pleased my eyes once more
As soon as I had left the morbid air
That had afflicted both my chest and eyes.
The fair planet that emboldens love,
Smiling, lit up the east,
Veiling the Fishes in her train (13-21)

These lines are from the first canto of Dante Alighieri’s Purgatorio (2003, translated by Robert and Jean Hollander). They distinguish everything that follows from the darkness of his Inferno. In them the great poet correctly identifies a fundamental feature of purgatory. It is a place of light. No “sweet color of oriental sapphire” describes anything in hell. Nor is the air pure there, as it is in purgatory.

Arriving in purgatory, the poet has entered God’s kingdom. Its denizens are not sad. They live in hope. They know that they are heaven bound, that eternal damnation is no longer a possibility for them.

“The fair planet that emboldens love” is Venus. Love rules; loves shines in purgatory. It is a place wrought in love and mercy. Indeed one might call purgatory the final mercy, because it is the process whereby God compassionately picks up the sin-scattered pieces of the human soul, readying them for heaven.

Venus veils “the fishes in her train.” Literally, one cannot yet see the constellation Pisces. It is still eclipsed by the bright planet. Metaphorically, Pisces, the fishes, is an ancient Christian symbol for the Christ, the Eucharistic Christ who, like the Pelican, feeds his own with his own flesh. Purgatory is entrance into love, entrance into the Christ, who “while we were still helpless, died at the appointed time for the ungodly” (Rom 5: 6).

To preach purgatory is no proclamation of “works righteousness,” because the work performed in purgatory is not a “second effort” at heaven. It is the continuing work of the Christ

For this is the will of my Father,
that everyone who sees the Son and believes in him
may have eternal life,
and I shall raise him on the last day (Jn 6:40).

Dante poetically traverses purgatory in time and space, though, strictly speaking, purgatory is neither. It is a process, one which purges the distortions, which the human person received on earth and in time. Like heaven, purgatory is the eternal drawing even the sin-tattered temporal into itself.

To understand purgatory one must ponder the relationship between grace and time. Time itself is a lowering, a kenosis, of God. In contrast to us, the angels chose for, or against, God in what to us would not have been even an instant. But God created the ages, time itself, for the human person, the human race, to grow, to develop, to become that self, which alone can choose God. What comes to be in time and on earth, the human person, is what God desires.

The doctrine of purgatory is the recognition that God doesn’t engage humanity by extrinsic decree, by fiat. The encounter is always in time, in places, in other human beings, in the Incarnate Word himself.

In the final mercy that is purgatory, time is not left behind, and what we became in time is not abandoned. It is collected, purified, drawn into the passion and resurrection of the Christ, which, although it happened in one place in time, at one place on earth, draws all places, all moments of time into itself, a burning vortex of love.

In the time of their visitation they shall shine,
and shall dart about as sparks through stubble;
they shall judge nations and rule over peoples,
and the Lord shall be their King forever.
Those who trust in him shall understand truth,
and the faithful shall abide with him in love:
because grace and mercy are with his holy ones,
and his care is with his elect (Wis 3: 7-9).

To pray is always to call down the eternal into the temporal. That is what we do today for our dead. Some are not yet with God, yet they have been claimed by God. They are God’s own. And they are our own. And so we pray that God purify them, that God grant them the final mercy, which is to ready them for himself.