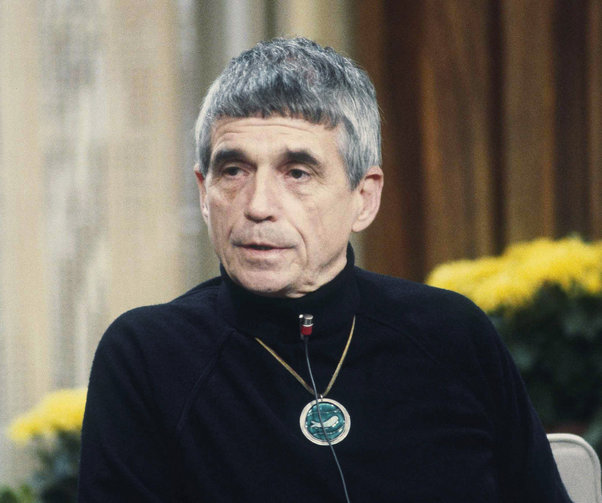 The following is the homily by Luke Hansen, S.J., at the Mass of Remembrance for Daniel Berrigan, S.J., on May 6 at the Gesu Chapel at the Jesuit School of Theology in Berkeley, Calif.

During this Easter Season, in the Acts of the Apostles, we have been on a journey with the Apostle Paul “to the ends of the earth.” He has traveled through Asia Minor, Europe, Philippi, Thessalonica, Athens, and today we are with Paul in Corinth. Paul is following the Spirit, strengthening other followers of the Way, casting out demons, denouncing idols and, most significantly, proclaiming the crucified and risen Christ.

Many came to believe. Some opposed him. On several occasions, he was arrested and imprisoned. On what grounds? The authorities claimed he was creating “public disturbance” (Acts 16:20). They accused Paul of “opposing the decrees of Caesar and claiming another king, Jesus” (Acts 17:7).

In Athens, Paul proclaimed the God “who gives life and breath to everything” (Acs 17:25). And he called the people to repent and to turn toward this God of life made known in Christ Jesus. Again, many came to believe, and some opposed him. In today’s reading, Paul is in Corinth, and the Lord says to him in a vision: “Do not be afraid. Go on speaking, and do not be silent, for I am with you” (Acts 18:9).

Let us remember for a moment that Paul had been Saul. He had been in the business of doing violence. He colluded with the authorities to persecute others. He even consented to murder. So what changed?

On the road to Damascus, he encounters the Risen Lord who says to him, “Saul, Saul, why are you persecuting me? I am Jesus, whom you are persecuting.”

Paul then turned away from death and began to proclaim the One who invited him to see the violence he was doing to others, to turn away from this violence, and to proclaim the Lord of life. Paul traveled great distances to proclaim this God of peace and persisted in the mission even when it resulted in opposition, insults, imprisonment. Paul encouraged his fellow Christians: “Keep on doing what you have learned and received and heard and seen in me. Then the God of peace will be with you” (Phil 4:9).

Does Paul remind you of anyone?

Today we remember and celebrate another great apostle, Daniel Berrigan. He died on Saturday, at age 94. Dan made the proclamation of the God of peace, and the Good News of peace, the central commitment of life.

In the past few days, we have witnessed an outpouring of love and affection for this man and what he stood for. I have been thinking about what made Dan so loved, so popular—and so divisive.

In the face of all the violence and injustice of the world, I think we can feel a bit tired and even lost. We know things are not as they should be—not as they could be—but we are not sure what to do. Dan shared this dis-ease with human suffering and violence. As a poet, he had a gift for naming this violence and disorder. He could clearly and prophetically express what we know deep down. He showed a way forward. He was immersed in prophetic texts and read these texts in the context of community, which strengthened and encouraged conscience and action. The bold and daring public action named this violence and enacted hope for a new future, what we call the kingdom of God.

Dan deeply believed that we are all participants in the Gospel story. We are on the road with Jesus and with the Apostle Paul. Dan helped bring the story alive. He made it fresh. In a world of violence, he proclaimed the Prince of Peace.

Jesus said, “You have heard, ‘Do not kill,’ but I tell you whoever is angry with his brother is liable to judgment” (Mt 5:21-22). Jesus came to fulfill the law. He preached mercy, forgiveness, reconciliation and love, even of enemies. He said there is another way. He proclaimed that we are all children of one God, and we should treat each other accordingly.

In the 1940s, when Dan was a Jesuit regent at St. Peter’s Prep, he brought students across the Hudson River to the Catholic Worker, then a young movement. There he met Dorothy Day, who helped him understand the connection between “human misery and poverty with warmaking.” Dan said in an interview, “She taught me more than all the theologians. She had a basic hope that God created the world with enough for everyone, but there was not enough for everyone and warmaking.”

As U.S. violence increased in Vietnam, Dan’s conviction grew that Christians must stop the killing. He saw conventional protest as ineffective in changing U.S. policy. He and his brother, Philip, believed that they needed to take the initiative and place the State on defense.

On May 17, 1968, a group of nine Catholics entered the selective service office in Catonsville, Maryland, carried hundreds of draft files into the parking lot, and set them on fire with homemade napalm.

In a statement, Dan wrote, “Our apologies, good friends, for the fracture of good order, the burning of paper instead of children, the angering of the orderlies in the front parlor of the charnel house. We could not, so help us God, do otherwise.”

The group dramatized the horrors of war, especially the death of children, and proclaimed that another world is possible.

In 1980, in response to the horror of Hiroshima, the stockpiling of nuclear weapons, and the threat of nuclear war, Dan again said, “The killing must stop.” Again, an action grew out of community, engagement with Scripture, discernment, and conscience. On Sept. 9, 1980, Dan, Phil and seven others broke into the General Electric missile plant in King of Prussia, Pennsylvania, where they hammered on an unarmed nuclear weapon—the first Plowshares action. They were inspired by the prophet Isaiah, who proclaimed: “They shall beat their swords into plowshares and their spears into pruning hooks; One nation shall not raise the sword against another, nor shall they train for war again” (Is 2:4).

The group included the late Anne Montgomery, a sister of the Sacred Heart. [Mary McGann, R.S.C.J., is a member of our school community.]

In these big events, and in many small ways throughout 76 years of Jesuit life, Dan proclaimed the Word. It challenged and inspired. Many people in this chapel have been touched by his witness. Next week we will have an opportunity to share his poetry, share personal stories, and share how he has left his mark on us.

Knowing Dan for the past nine years has been a great gift in my Jesuit life. He was gentle, wise, and funny. He never stopped being prophetic.

He listened to my questions, fears and hopes. His response always focused on what is most fundamental. He would say: Live the Gospel, and let the chips fall. Tell the truth and say your prayers. You don’t need anyone’s permission to live the Gospel. And he always emphasized that it is community that makes it all possible.

He talked about community all the time. He said if we want community in the world, we have to practice it. He had it: his Jesuit community, their extended community of friends, the friendships he maintained near and far, the Kairos Peace Community. We can’t do it alone. He was in it for the long haul. Seventy-six years as a Jesuit. What a sign of hope!

And what about us? Where do we stand?

Our lives undoubtedly give testimony to this Good News! At the same time, during this past week I have found myself asking: Have I made peace with violence, and with a place like Livermore Labs? Does it disturb my conscience? What is my response?

And we do this knowing that the Lord is with us today, saying, “Do not be afraid. Go on speaking, and do not be silent, for I am with you” (Acts 18:9).

Luke Hansen, S.J., is a former associate editor of America.

Show Comments (
1
)
Comments are automatically closed two weeks after an article's initial publication. See our comments policy for more.
Leo Cleary
3 years 9 months ago
Nice piece. You knew Dan well even if for a short time. But that is all one needed. Many years ago, in the midst of that tiredness and sense of loss that you speak about, he gave a small group of us a weekend retreat. No longer in prison, some denounced him as a traitor to America; or a disobedient bad priest and Jesuit. He was their enemy. Later, seeing him a alone for a moment, I asked him "How do you respond to your enemies?" He said with warm eyes: "I don't have any enemies."
Advertisement