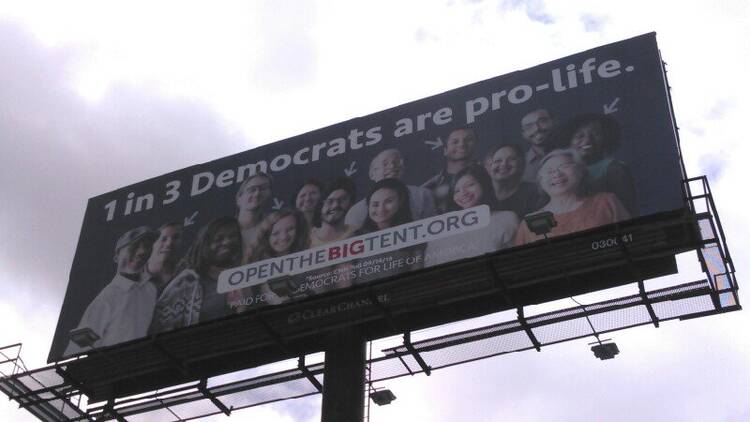 Democrats for Life may have lost the battle, but they’re hoping to win the war, as they see the party’s future inextricably linked to how well it carves out room for individuals opposed to abortion.

Over the weekend, Democratic Party leaders meeting in Orlando, Fla., advanced a draft of its 2016 platform that for the first time in party history calls for ending the ban on federal money used to fund abortion. The Democrats’ presumptive nominee, Hillary Clinton, also supports ending this restriction.

Ilyse Hogue, president of NARAL Pro-Choice America, noted in The Washington Post that challenges to the Hyde and Helms Amendments, which prevents U.S. tax dollars from being used to fund abortion at home and abroad respectively, met no resistance inside the hotel ballroom.

But Kristen Day, head of Democrats for Life, said her group, recognized as an “ally group,” will be inside the Wells Fargo Center when the Democrats meet in Philadelphia later this month, pushing the message that Democrats can’t win with what she dubbed “extremism” on abortion. After an unsuccessful effort to get delegates to amend the platform language on abortion before it goes to a full vote in Philadelphia, which included an online petition, Day said she will urge party leaders to look beyond winning the White House.

“You can’t rely on the White House to pass things like paid leave, or Medicaid for all, or increased access to health care, or a minimum wage increase,” she told America, referring to other issues she believes are important to the pro-life cause. “You can’t pass any of those things when you have Republican majorities in the rest of the country. You can’t just rely on the White House, and that’s what we’re doing right now.”

Day pointed to substantial Democratic losses at the state and national levels following the passage of the Affordable Care Act, which contained provisions to increase access to contraception, including methods church leaders consider abortifacients. “We can’t pass more laws to support pregnant women and working families and protect this 'Whole Life' point of view if we’re in the minority,” she said. “In swing districts, the pro-life vote can make a difference.”

During the convention, Day’s group will unveil a report that she said shows that the party’s extreme views on abortion are out of touch with most of the U.S. electorate and is thus harming progressive goals. Day claims membership in her organization is “in the thousands,” but she believes there are about 21 million Democrats who identify as pro-life. Day hopes to use the convention “to find these pro-life Democrats because we really need more unity and a stronger voice in the party because so many pro-life Democrats are afraid to speak out.”

Perhaps because a plurality of Americans, about 39 percent, does not belong to a political party, according to a 2014 Pew Research Center study, the public’s views on abortion are more nuanced than either the Democratic or Republican Parties advocate. According to a 2015 Gallup poll, about 68 percent of Democrats identify as “pro-choice,” a percentage that has ticked up in recent years. The general public is more split.

A 2015 poll by the news site Vox found that 39 percent of Americans don’t believe that the ubiquitous “pro-life” or “pro-choice” labels accurately define their views on abortion. A YouGov poll from 2013 found that most Americans support some restrictions on abortion, with about 60 percent favoring a ban on the procedure past 20 weeks of pregnancy.

Day says the party’s 2016 platform is ignoring the views of the majority of Americans. “We’re not calling for safe, legal and rare anymore,” Day said, referring to the stance of former President Bill Clinton in the 1990s. That formula was dropped from the party’s platform in 2008. “We’re just calling for legal for any reason. That’s a big change from where we were even a couple years ago, this extreme position.”

Day cringed at the idea that anti-abortion activists are concerned only with bringing children to term, and she said pro-life Democrats are uniquely suited to highlight the need for more comprehensive pro-family policies. She pointed to a group of women she met with who run crisis pregnancy centers as examples of how Democrats should approach support for new mothers.

“They provide free prenatal care, free healthcare, there is job training, there are clothes, there is all this support for pregnant women to carry this child to term and make sure they have the tools and the skills to raise the child as well,” she said. “It’s not just saying that you must have the baby; it’s the support after that’s so necessary.”

“And instead of focusing on that support after [pregnancy],” Day continued, the party “is just saying, ‘Have an abortion.’”

In addition to their booth, Democrats for Life also plan to advertise their message on a billboard near the convention center and will host an awards ceremony honoring Louisiana Governor Jon Bel Edwards, where “at least three” pro-life delegates will attend. Asked what she hopes to accomplish by her group’s convention presence, Day said she wants to convince other Democrats who don’t share their party’s views on the topic to “come out” of hiding.

“We’re pro-life Democrats, and we have a consistent ethic of support for the pregnant woman, and the new mother and the young family across the board,” Day said. “We don’t think we should abandon the family when the child is born, and I think Democrats understand that.”

Michael J. O’Loughlin
@MikeOLoughlin
Show Comments (
5
)
Comments are automatically closed two weeks after an article's initial publication. See our comments policy for more.
Crystal Watson
6 years 6 months ago
I hardly know where to start ... - To say that a majority of Americans want to ban abortion is untrue. A majority of Americans want it to stay legal. - Repealing the Hyde amendment is not "radical" but a decision to finally help those poor women who most need assistance in affording an abortion. - The crises pregnancy clinics are notorious for the lies they tell patients. California has now forced them to stop lying about their services. - There is no chance that the Democratic party will adopt any anti-abortion stances. The Democratic party will always support and protect the rights of women - that's one of the most fundamental planks in the platform.
J Scanlon
6 years 6 months ago
I deeply admire Kristen Day for her efforts. For me the Democrat Party, as it analogously did on Slavery, has become the Party of death. I think that were our two major Party's to be pro-life on abortion, much of our politics could focus on efforts where some realistic compromise could be had: national health care (with the GOP's help, well funded) and questions of war.
Bill Collier
6 years 6 months ago
I know several pro-life Democrats, who like me, won't be voting for the Democratic presidential candidate this year. We won't be voting for Trump either, but it remains almost certain that both the Senate and the House of Representatives will remain in Republican control, and even if one of the House bodies were to switch party control this election cycle, it's very unlikely that the federal restrictions on abortion funding would be rescinded. What is more likely is that continued intra-party alienation of pro-life Democrats will shrink the DP base even further. Once fertile ground for the election of Democrats to the Senate and the House of Representatives, the South has been transformed into a Republican fortress on election night result maps. That has happened for a number of reasons, but it seems counterproductive to me for the DP to risk further shrinking of its base. And I don't see the expected demographic growth in the Hispanic population as sufficient to fortify the Democratic ranks. Yes, there are likely significant numbers of Hispanics who will vote Democratic, but there are also many Hispanics who are pro-life and who will find themselves a more comfortable political home in the Republican Party. (Cruz and Rubio are just two extant examples.)
Crystal Watson
6 years 6 months ago
It's hard to imagine that pro-life Democrats are numerous enough to make any difference in the election, especially when you consider that even among Catholics, a majority support keeping abortion legal. Even Trump has said he will support abortion exemptions for rape and incest and the health of the mother.
Elmer Stoup
6 years 6 months ago
Agree with Crystal on one thing. The modern-day Democratic Party is totally invested in killing unborn children. It will probably take the party "faithful" several generations to realize the horrific acts they have condoned in return for votes. It took 150 years for the party to stop treating black folks like subhumans.