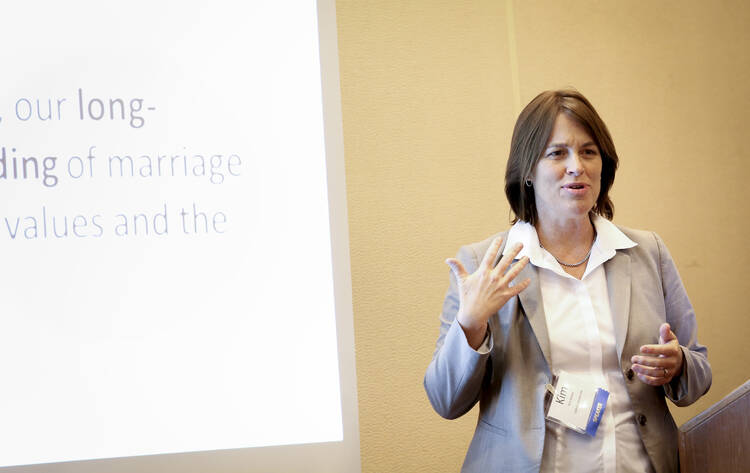 Pope Francis has appointed a former spokesperson for the U.S. Conference of Catholic Bishops to the newly formed Secretariat for Communication, the Vatican announced Wednesday.

Kim Daniels, who served as the spokesperson for Cardinal Timothy Dolan in his capacity as president of the U.S.C.C.B. and who was also the founder of Catholic Voices USA, will attend meetings in Rome and offer advice as the Vatican seeks to reform its sprawling communications apparatus, which includes multiple websites and social media accounts, a newspaper and television and radio stations.

Daniels, a lawyer based in Washington, D.C., still serves the U.S. bishops as a consultant on religious liberty issues. She said at the time of her appointment as Cardinal Dolan’s spokesperson that the key issues facing the U.S. church in coming years would be religious liberty, fighting same-sex marriage and abortion, solidarity with the poor and immigration reform.

Cardinal Dolan hired Daniels in 2013, after he expressed a desire to have a layperson explain the views of the conference to the media, about eight months before his term as president ended. Daniels stayed on for three months under his successor, Archbishop Joseph Kurtz. The conference said at the time that she had left to spend more time with her husband and their six children.

Before her U.S.C.C.B. appointment, Daniels led Catholic Voices USA, which trains Catholics how to speak about their faith in the media effectively. She told the National Catholic Register in 2013 that the goal of the organization was to create a crop of Catholics who could talk in the public square about topics important to the church in a dispassionate way, by “shedding light and not heat on the issues.”

A graduate of Princeton University and the University of Chicago Law School, Daniels worked on religious liberty issues for the Thomas More Law Center, where she focused on conscience protection issues. She advocated, for example, for conscience policies that would shield pharmacists from being required to distribute the so-called morning-after pill.

Along with pro-life activist and George Mason University law professor Helen Alvaré (a columnist for America), Daniels also helped launch a website originally conceived as a space for women to express opposition to the Affordable Care Act’s contraception mandate. Called Women Speak for Themselves, the site has since expanded into an online advocacy group that claims 41,000 members committed to using the media to talk about religious liberty issues.

Daniels told the Catholic website Crux that she is eager to help support the pope’s mission.

“Pope Francis is showing us how best to convey the Gospel: by bringing the love at the heart of our faith close to people in the concrete particularity of their lives,” she said. “The hallmarks of his approach—mercy, dialogue, personal encounter—are essential to effectively bringing our faith to others, and I’m looking forward to helping advance that mission.”

Archbishop Kurtz, whose term as president of the U.S.C.C.B. wraps up at the end of the year, told Crux that Daniels would bring strong insight in reaching out to young people.

“Kim brings both an insightful approach to communications and a knowledgeable love of the church,” he said.

The Secretariat for Communications includes 13 cardinals and bishops, including representatives from Europe, Africa, Asia, Latin America and the Middle East, as well as three lay people.

Michael J. O’Loughlin
@MikeOLoughlin
Show Comments (
1
)
Comments are automatically closed two weeks after an article's initial publication. See our comments policy for more.
J Scanlon
6 years 6 months ago
If the committment to religious liberty, fighting against same-sex marriage and to mitigate abortions, and having solidarity with the poor and to reform U.S. immigration policy remain keys in her new job, I think some very good things will happen under her watch.