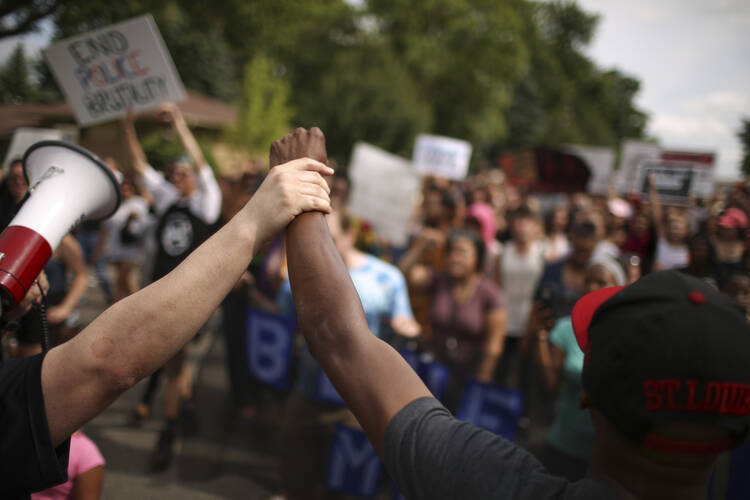 Philando Castile, killed by a police officer in suburban St. Paul, Minn., on July 6, will be remembered at a funeral service inside Catholic Cathedral of St. Paul this week, the archdiocese announced on July 12.

Castile’s family belongs to a nearby Baptist church, but Castile’s mother, Valerie, requested that the service be held at the cathedral as a way for “people to come together in a new way,” according to the archdiocese’s statement. She explained during a press conference on July 12 that she chose the cathedral for her son’s funeral because “my son is a king, and he is also a martyr, so I thought that was the best place for his services.”

The Rev. Steve Daniels, pastor of Shiloh Missionary Baptist Church, will deliver a eulogy and the rector of the cathedral, Father John Ubel, will lead the prayers during Castile’s funeral. The texts at the service will “focus on the preservation of peace, justice and reconciliation among all people” and incorporate Catholic prayers used for funerals held outside of a Mass.

The archdiocese noted that “burying the dead is a Corporal Work of Mercy, and of particular importance in this Jubilee Year of Mercy, as declared by Pope Francis.” It called the cathedral, which seats about 3,000, “a spiritual home for all.”

Archbishop Bernard Hebda held a special Mass for peace at the cathedral on July 10, drawing about 250 people, some of whom wore white t-shirts imprinted with “Philando Castile” in black letters. The Mass, Hebda said, was held to “allow us to ask the Lord not only to console Mr. Castile’s grieving family and loved ones, but also to heal the divisions in our community, to guide our public servants in their pursuit of the common good and to satisfy the longings of those who thirst for justice and peace."

During his homily, Archbishop Hebda spoke of God’s hope for those who suffer. “Feeling that pain in our community and beyond, it’s easy to feel overwhelmed, helpless, anxious, and yet it is precisely in those moments that we know our own weakness that we have the opportunity to make known the love and strength of our God,” he said, “a God that offered a great a hope to his people at a time when they were hopeless.”

Castile, who was African American, was pulled over in Falcon Heights, Minn., reportedly for a broken taillight. Later, an audio recording made during the traffic stop revealed the officer believed Castile looked like a suspect in an armed robbery, which critics say paints the event with a racial tinge. Castile was shot four times. His girlfriend, Diamond Reynolds, live-streamed the aftermath of the shooting on Facebook.

She said Castile told the officer he was carrying a licensed firearm and was shot when he went to reach for his wallet. Reynolds’ 4-year-old child was also in the car.

An attorney for the police officer, Jeronimo Yanez, said Yanez reacted to Castile’s gun, not his race.

The funeral service will be held on July 14 at noon.

Correction: July 13, 2016
A previous version of this article misstated the location of the Catholic Cathedral of St. Paul. The cathedral is located in Saint Paul, Minn., not Minneapolis.

Michael J. O’Loughlin
@MikeOLoughlin
Show Comments (
2
)
Comments are automatically closed two weeks after an article's initial publication. See our comments policy for more.
William Rydberg
5 years 3 months ago
Godspeed Philandro, in Christ,
Joe Mcmahon
5 years 3 months ago
Parish bulletins, those Sunday handouts that seem to have originated about 1950, often provide an insight into the parish. The bulletin of the Cathedral of St. Paul for July 10 is a good example. I particularly liked the Rector's narrative of the introduction of alternate Eucharistic prayers. Also, he has an eye for Church architecture and for three-unit freight trains. Please see http://www.cathedralsaintpaul.org/sites/default/files/files/20160710B.pdf