Schools: the next big arena for the transgender debate 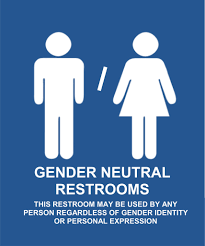 The question of whether transgender individuals can use the bathroom of their choice is shaping up as a battle between states’ rights and the federal government. North Carolina is currently suing the federal government, saying it overstepped its authority by trying to prevent the state from requiring transgender individuals to use the bathroom that corresponds with their birth gender.

The federal government says North Carolina’s law, and others like it, amount to sex-based discrimination. It has threatened to withhold funds.

On May 13 the debate stepped up another notch when in a surprise move the Obama administration issued guidance directing public schools to allow transgender students to use bathrooms and locker rooms consistent with their chosen gender identity. The guidance from leaders at the departments of Education and Justice says public schools are obligated to treat transgender students in a way that matches their gender identity, even if their education records or identity documents indicate a different sex. According to the administration, the guidelines are meant to ensure that "transgender students enjoy a supportive and nondiscriminatory school environment."

Even before the latest move by the Obama administration, school systems across the country had been re-evaluating their policies regarding bathrooms and locker rooms. Their response could offer clues as to how the question ultimately gets resolved.

Several Midwest schools began examining their policies in the wake of a case in Palatine, Ill., a largely white, affluent community in the northwest suburbs of Chicago. The issue was whether a Palatine High School student transitioning from male to female would be allowed to change in the girls’ locker room.

The teen, identified only as “Student A” in public documents, was already playing on a girls’ athletic team. She had been on a regimen of female hormones since middle school and has an official diagnosis of gender dysphoria—a severe discomfort with one’s birth gender. School records identified her as female.

The civil rights office of the U.S. Education Department found that excluding Student A from the girls’ locker room violated Title IX, which prohibits sex-based discrimination in sports. The department threatened to withhold funding. Ultimately, the school district reached a compromise. It agreed to allow the student to change clothes in the locker room, behind a curtain.

Changing hearts has proved another matter. Six female students sent a protest letter to the local school board. “Although we will never fully understand your personal struggle,” they said, addressing the transgender student in their letter, “Please understand that we, too, all are experiencing personal struggles that need to be respected.”

The girls told the school board, “It is unfair to infringe upon the rights of others to accommodate one person.”

School systems across the country have noted the Education Department’s threat to Palatine. Some are responding proactively.

Unlike Chicago, central Illinois is a largely socially conservative, Republican-leaning agricultural area of the state. Unit 5, one of the largest school districts in that part of the state, recently amended its bathroom and locker room polices to accommodate transgender students. District 87, a nearby school system, is also considering a change.

“We’re trying to create an environment where students can be educated without fear of being harassed and bullied and be free to be who they are,”  Unit 5’s attorney and human resources director Curt Richardson told me.

Unit 5 wasn’t under threat of a lawsuit and did not face a noisy public outcry for more liberal bathroom rules. But the Palatine case weighed heavily in its decision, Richardson said. “This is a developing area of the law. So we were trying to be on the forefront of that and be progressive,” he said.

Some parents have expressed concern. Richardson says he tells them, “If you’ve ever been around trans individuals, the amount of harassment they receive is just tremendous and then [there is] the correlation to suicide rates among transgender individuals. So you have to ask yourself, why would anyone subject themselves to that kind of harassment just to get in the girl’s restroom?”

It is likely only a matter of time before the debate over transgender rights arises in Catholic schools. It is already happening.

I recently spoke with a student from an Illinois Catholic high school who was born female and now identifies as male. The student said administrators were uncomfortable discussing the transgender experience, let alone changes to bathroom or locker room policies. He said he had been sent home on one occasion for wearing a suit and tie to a school dance. Many teachers and students, he said, continue to call him by his female given name, though he had asked to be called by his preferred male name.

“It’s really hard to be in class and just trying to learn, and somebody calls out your birth name and it’s like, oh, that’s not my name,” the student said. “It’s really embarrassing and it makes me feel bad. And even though it’s all the time, it still hurts.”

The student is active in several school clubs and has many friends among classmates but says he is considering transferring to another school for senior year. He wishes he could stay. “This is not something that is new, this is not some phase or fad that is going on right now. These are my feelings, this is who I am, this is part of me and part of the world,” the student said. “There are so many people that are like me that are normal, people who just want to live their lives and not be hurt every day.”

Unit 5’s process could serve as a model for other school systems and private schools. The transgender policy changes were made after a year of extensive consultations between school officials and transgender rights activists, including graduates of Unit 5 schools. The policy only covers students who have an official diagnosis of gender dysphoria or who already have changed their gender on a document such as a birth certificate or driver’s license.

Cameron Hurley, a transgender graduate of Unit 5 schools who worked for the changes, said Catholic and private schools don’t face the same pressure as publicly funded schools to accommodate transgender students. In the case of Catholic schools, transgender students who seek change will have to “fight on their own. It’s going to have to be a private fight outside of government,” he said.

Hurley says one of the biggest arguments for giving transgender individuals the right to choose their restroom is that they put themselves at risk if they use a bathroom that corresponds with their anatomy but not how they look.

“I pass as male, and if you’re going to force me to use the women’s restroom because I haven’t changed my anatomy to your liking that could be reported as a man in the women’s restroom, and then it becomes dangerous when police become involved in things like that,” Hurley said.

“Trans people are like everyone else. They want to go into the bathroom, do what they have to do and get out,” Hurley added. In states that have anti-discrimination laws, there have been no reported incidents of anyone being attacked by a transgender person in a public restroom, he said.

Some 200 cities and 17 states have adopted measures allowing transgender people to use the public bathrooms of their choice. And though a backlash has begun—witness the North Carolina law among others—the debate isn’t going away. Instead of ignoring the issue, Catholic schools would do well now to begin to formulate a compassionate response.

The Administration’s letter to its “colleagues” in the nation’s public schools brings to mind Little Red Riding Hood, standing innocently before the large, smiling figure in granny clothes, except for the disconcertingly big, sharp teeth. The Obama teeth emerge on page two of the Education Department’s letter: “As a condition of receiving Federal funds . . .” Yes, unless the schools “treat a student’s gender identity as the student’s sex for the purposes of Title IX,” the school district may lose federal funds.

The Obama Administration’s preoccupation with sex, whether in sophomore year or the fourth grade, raises questions about whether the federal bureaucracies know at all what they are doing on anything resembling the merits. The 2011 letter on sexual harassment waved into existence a long list of compliance measures that schools had to institute, including novel procedures for handling accusers and the accused. This has led to serious complaints that traditional due process is disappearing on campus.The new rules on transgender students push further into unknown territory. The Friday “Dear Colleague” letter posits that a student’s personal declaration of sexual gender, or what the letter calls “an individual’s internal sense of gender,” must be accepted without challenge.

Tim O'Leary
5 years 2 months ago
Good article. The attack on federalism is just as bad - an Orwellian "guidance or else" dictate. I read that they used the word "guidance" to avoid Congressional oversight. Probably trying to sabotage Hillary's campaign?