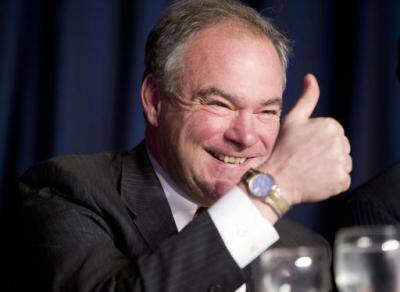 Democratic vice presidential hopeful Sen. Tim Kaine said on Saturday night that his support for same-sex marriage is driven in part by his Catholic faith, and that he expects the church could change its views like he did.

Delivering the keynote address at a Washington, D.C., fundraiser for the Human Rights Campaign in front of about 3,600 people, Kaine called himself “a devout Catholic” and said that even as he supported non-discrimination laws for gays and lesbians as lieutenant governor and then governor of Virginia, he nonetheless still “believed that marriage was something different.”

Part of that reasoning came from his lifelong Catholic faith, which teaches that marriage is a union of one man and one woman. But Kaine’s opposition to same-sex marriage was challenged by relationships with friends and pressure from his children.

“But I had a difficult time reconciling that reality with what I knew to be true from the evidence of my own life, with the teachings of the faith that I had been raised in my whole life,” he said.

Kaine said his family also helped convince him to back same-sex marriage, and he became one of the first U.S. senators to lend his support to the cause.

“My three children helped me see the issue of marriage equality as what it was really about, treating every family equally under the law,” he said.

Kaine, who attends a primarily African-American Catholic parish in Richmond, Virginia, acknowledged that his “unconditional support for marriage equality is at odds with the current doctrine of the church I still attend.”

“But I think that’s going to change, too,” he said to applause, invoking both the Bible and Pope Francis as reasons why he thinks the church could alter its doctrine on marriage.

“I think it’s going to change because my church also teaches me about a creator in the first chapter of Genesis who surveys the entire world including mankind and said it is very good, it is very good,” he said.

“Pope Francis famously said, ‘Who am I to judge?’” Kaine continued, referencing the pope’s 2013 comment when asked about gay priests in the church.

“To that I want to add, who am I to challenge God for the beautiful diversity of the human family?” Kaine asked. “I think we’re supposed to celebrate it, not challenge it.”