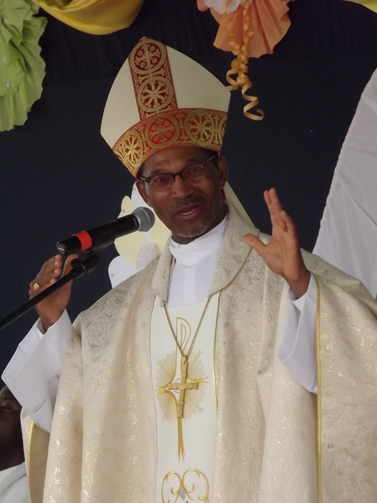 Bishop Arlindo Gomes Furtado, 65, is bishop of the diocese of Santiago in the Republic of Cape Verde, a horseshoe archipelago of ten volcanic islands some 350 miles off the coast of northwest Africa.

Santiago is one of the Republic’s two dioceses, both of which Bishop Furtado has led in his 10 years as an ordinary. It’s also one of the oldest dioceses in all of Africa, dating back to 1533; Our Lady of the Rosary Church (erected in 1493) was in fact the first colonial church in the entire world. Of the area’s 320,000 plus residents, 92 percent are Catholic.

In his nearly 40 years as a priest, Bishop Furtado has served the people of Cape Verde in a wide variety of roles, including parish priest, pastor, diocesan treasurer and chancellor, rector of the local seminary, professor of Scripture studies and Vicar-General. He has also made it a priority to offer support for the many Cape Verdeans living abroad, a population that is even larger than the 514,000 on the islands themselves.

Though it has few natural resources, the Republic of Cape Verde has prospered under decades of stable democracy and economic management. Today it offers the longest life expectancy of any country in Africa and is one of the top countries in the world for renewable energy.

Bishop Furtado is the Republic’s first ever Cardinal. His episcopal motto is “Jesus, O Bom Pastor”—“Jesus, the Good Shepherd.”

How do you feel about being named Cardinal? How has your family reacted?
It was a total surprise because there was no sign that I could be appointed cardinal. My initial reaction was that of someone who does not feel ready for a task of this nature and on this level. But then, after the emotion passed, I thought about the mysterious reality of God's call to service of the church and still seeing a concrete sign of this call by the Holy Father, I can say that I am willing to do this service as advisor and collaborator of the pope with full availability and good intention.

My family reacted well, with great joy, along with the whole church in Cape Verde and Cape Verdeans in general.

What do you hope for the church today?
The church is the community which has Jesus Christ as head and as guide to fulfill the mission that Christ himself gave it: to take the presence of God to the heart of each person and into the midst of all human society, helping people to have an awareness of being brothers and sisters in Christ. This is the ever-present job that the church must develop. In other words, that people realize that we have a God who is the Creator and Father, friend and companion, who strengthens us and is merciful, a God who forgives our failures and wants to perfect us more and more to live in communion, in peace, in harmony and fraternal solidarity, as a special sacrament of God's Kingdom.

Along these lines, anything that might hinder human communion must be eliminated. Unfortunately in the world there are so many negative forces linked to extremist groups, or that somehow oppress human beings. Acting on behalf of the liberation of the whole person, the Church continues the program of Jesus Christ that came for the poor, to set free the captives and proclaim “a year of grace” of the Lord, a la Isaiah 61 returned to in Luke 4.

In short, I hope that the church fights against all forms of violence and destruction of human dignity, as Pope John Paul II called for during his visit to Cape Verde 25 years ago.

What is one message you feel the church should be offering to today’s world?
I think the main message is to give concrete and visible witness of God, our relationship with God. The baptized must show how good it is to be with our God who is Friend, who accompanies and protects us, who helps us grow and take responsibility at the level of our society and at the level of our relations with others.

Ultimately the church must pass to the world a message of a God who is Father, who is Communion and who loves everyone unconditionally.

The church must teach people with its witness of life to “grow together in peace and harmony, serenely affirming the rights of God over Humanity... ", as Pope John Paul II recalled in Cape Verde (homily on January 26th, 1990 in Cape Verde capitol Praia).

Thus another message to the world is to not be afraid of God's power over man because his is a power of service, [a power] not to oppress but to liberate and bring about the full growth of all. God is at the service of his people and his Love is an instrument of the happiness and full satisfaction of each of his sons and daughters. Ultimately the church must convey to the world a message of hope toward a future that is more human and therefore more Christian, more divine.

What are the most pressing issues facing your region and community?
Today society everywhere faces manifold challenges. In the region of the West African coast this is highlighted with challenges such as religious freedom, civil rights, poverty, underdevelopment, political instability, lack of peace in society, the threat of Islamic radicals, trafficking in drugs and people, and the phenomenon of children at risk.

Situated in this region, Cape Verde is affected by these diseases, of which I would highlight the issues of poverty (23 percent); unemployment, especially among youth, and the instability of the one-parent families, with serious repercussions on children's education, the stability of persons and the equilibrium of society.

Given these challenges that society lives with, the church in Cape Verde, in the wake of society’s secular path, stands serenely as an instrument of the formation of conscience and the equilibrium of people, family and social life, which ultimately reflects on the quality of the institutions in the service of the common good.

Its actions, aimed at the affirmation of human dignity, are contributing to tackling the negative and building a society that is more cohesive, more just, more equitable and more fraternal.

What’s an image of God, passage from Scripture or figure from church history that you look to for support and encouragement?
The image of God that I highlight in Scripture is that of the Only Begotten Son who became man and showed us the face of the Father. In this line, Jesus is presented as the Good Shepherd who came not to be served but to serve Man. And the greatest service is the salvation of the human person.

This God who loves and cares in Jesus cancels the distance and comes to us to show us how to be perfect as the heavenly Father is perfect.

The Love of God revealed in Jesus the Good Shepherd, that is the trademark image for me. It encourages me to bring all that I am and have to the service of my brothers and sisters and the human community, as Jesus did.

Finally: What are your hopes for next October’s Synod?
The Synod has critical and sensitive issues to address in relation to the mission of the family, issues with direct impact on the church's mission today. I hope that the church, being a Teacher with a Mother's heart, can highlight how important family is to every human person, for couples and human society in general; that it can present the exigency of human love that is created by God, on the one hand, and on the other clearly reveals her motherhood, which stimulates the growth of the human and Christian dimension, in pursuit of holiness, that is, the love of God in concrete works, in favor of humanity.

At the end of the many debates that certainly will be, it is my hope that the Mother Church heads to her sons and daughters living with some sort of failure in life as spouses and as family with optimism, with practical incentives and welcoming gestures to enable these members to feel included in the life and activity of the church, in fact to feel the church is a big family and a welcoming home. I believe that this is in fact the greatest pastoral challenge we must face.

It cannot be said often enough that pastors and the faithful, couples, public authorities and civil and ecclesial organizations have to be creative and work in solidarity to sustain and heal families. For the good of this community of life and love remains a necessary condition for the happiness of every human being, today and in the future.