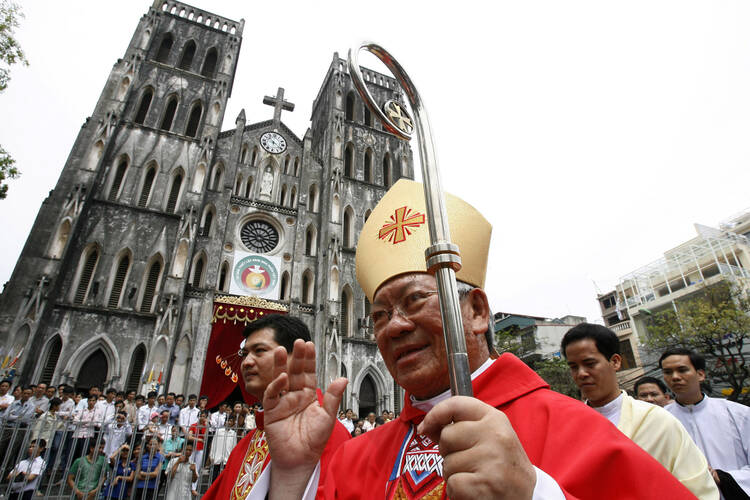 In Asia, says Hanoi Archbishop Peter Nguyễn Văn Nhơn, “It is more suitable for us to speak of the life of Jesus in a manner more in accord with how He Himself preached two thousand years ago, with His parables. An eastern, not rationalist, fashion.”

Age 76, now Cardinal Nguyễn has spent his life building bridges between Christianity and Vietnam, trying to speak in a way that leads to conversation and community. Catholicism has long occupied a precarious spot in Vietnamese society; in the nineteenth century it was the religion of the French who invaded and occupied the country. To the late-20th century Communist government it has at times likewise represented the possibility of a foreign threat. The Vatican has no official standing here; religious activity—such as the Archbishop’s initial ordination as an auxiliary in 1991—is subject to the approval of officials. Priests and other Catholics have been imprisoned at various times for perceived anti-government activities.

In recent years, as Vietnam has allowed greater religious freedom for its country’s six million Catholics, new conflicts have emerged, particularly over the government’s promise to return confiscated property like monasteries and churches. 2007 saw some Catholics, including church leaders, speaking out, mounting protests. But not then-Bishop Nguyễn. “Continuous fighting and clashes,” he advised, “will not do anyone any good.”

Acknowledging the fears of the regime, he has represented to the government that the property the church requests back is “not to serve its own interests, to hoard or to accumulate riches but to ensure that they are used to the advantage of all people.” This point of view hasn’t always won him favor with Catholics, who wondered before he became Archbishop of Hanoi in 2010 whether he wasn’t making it easy on the regime.

But his focus has yielded some results: since the 1990s the Vatican has sent an envoy to Vietnam every year, attempting to establish formal relationships. In 2011 Vietnam agreed for the first time to a non-residential papal representative.  Speaking after the consistory on Saturday, Cardinal Nguyễn said the dialogue they are engaged in “requires patience and sincerity. I’ve seen obvious efforts from the Vatican as well as from the government. The direction looks positive, but the path is still long and we need time.”

How do you feel about being named Cardinal?  How has your family reacted?
I was truly amazed to hear that I am on the list of the Cardinal-elect of the Catholic Church. The reason of my amazement is that I have reached the age of retirement and was waiting for the Holy See’s approval for retire. However, as a person of the church I accept every circumstance with the spirit of the church.

I would like to express my gratitude to God and to Pope Francis. I consider the tittle cardinal an honor, and according to the spirit of the Church this honor is for me to serve my brothers more effectively. With God’s grace and my ability, I will continue to love and serve the church and my country as I have been entrusted.

I was born into a family that has been Catholic for many generations. My parents have six children, three sons and three daughters; and three of us consecrated our lives for God. My family members and friends all join me to thank God, Pope Francis and the church. They congratulate me and encourage me to continue loving and serving the church and the country in accordance with my responsibility.

What do you hope for the church today?
The church was established by Christ on the foundation of the Apostles and their successors, with the guidance of the Holy Spirit, and the promise of the Lord: “I am with you until the end of the earth.” (Mt. 28,20) Therefore I trust the Church and entrust myself to the church. Perhaps I can say that “my life belongs to the Church and for the church.” I hope the church reflects the face of God who is meek, goodness, full of mercy through our mission of love and service.

What is one message you feel the church should be offering to today’s world?
Good News of peace, full of joy and hope is the message the world needs today. I believe the Church of God can spread and testify to the Good News of peace for all humankind.

What are the most pressing issues facing your region and community?
Our nation and peoples went through a long period of war and underwent all kinds of war’s consequences. I pray our country and peoples may overcome our challenges and difficulties to develop and bring happiness and stability for all people.

What has your region and your community taught you about God and the church?
Among the 90. 5 millions Vietnamese, the Catholic population is only 7 million, about 7.5 percent. Therefore we (Catholics) are minority. The church [in Vietnam] has three ecclesial provinces and 26 dioceses, 43 bishops including 13 bishops emeritus. The church has 8 seminaries and many facilities for candidacy programs where we prepare those for entering into seminaries; there are also almost 200 religious congregations, apostolate societies and consecrated communities. In the civil society, we share the life and activities of our nation. The ecclesial provinces of Hanoi, Hue and Saigon can have regular religious activities. I can say that the church in Vietnam is unified, active and in communion with the universal church, with the Holy See and with Pope Francis.

What’s an image of God, passage from Scripture or figure from church history that you look to for support and encouragement?
The church in Vietnam was born and grown by the foreign missionaries and the many testimonies of faith. The Good News was planted in Vietnam 400 years ago for our ancestors. The poor life and the salvific economy of Jesus with his death on the cross testified that “no one has greater love than the one who lays his life for his friends” (Jn 15:13); and the model of faith lived out by 130,000 Vietnamese martyrs  are the resource and support for us on our journey of faith.

Therefore, Pope Francis’ invitation touches deeply our lives. We remind each other to take courage and go out to the poor, the unfortunate people, the minorities in the remote areas; we are also aware that we need to go out of ourselves to bring the joy of Good News to our fellow citizens. Living our firm faith in the power of the Good News, we strive to live the “religion of love” so that the aroma of goodness from the Good News of divine love can spread out to our beloved Vietnamese fellows.

Finally: What are your hopes for next October’s Synod?
“For God so loved the world, that He gave His only begotten Son, that whoever believes in Him shall not perish, but have eternal life” (Jn 3:16). Modeled after Jesus, the teaching of the church particularly in Redemptor Hominis of Saint John Paul II, we see that the church’s reflection and decisions aim at the lives and happiness of humankind, for “humanity is the road of the church”; that is, all roads of the church lead to the human. (cf RF, 4)  Therefore, I believe that the Synod of Bishops this coming October will bring joy, peace, and happiness to the church, especially to the families.