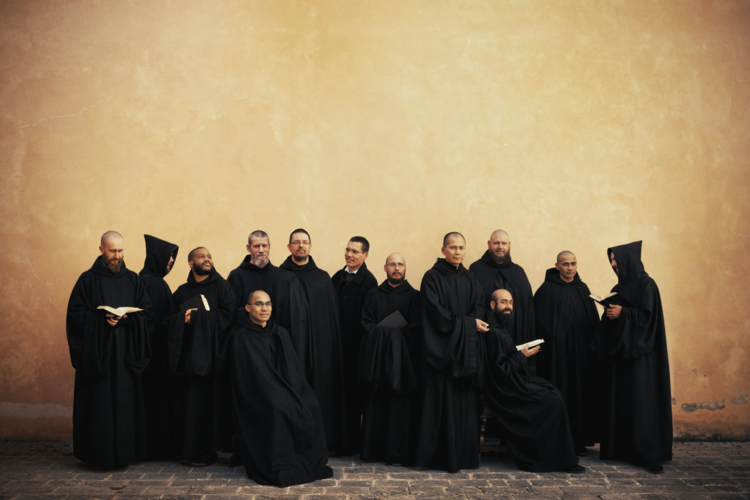 If you want to appear the cool music lover these days, don’t talk to your friends about R&B artist Jill Scott’s latest CD “Woman,” or how music from the film “Southpaw” is burning up the Billboard charts. No, what’s got the real aficionados buzzing is a CD of centuries-old music sung by a group of Benedictine monks from the quiet Italian city of Norcia.

Norcia is a community of stone streets and tiled roofs spread beneath the Sybilline Mountains of Umbria. Known in English as Nursia, it is famous for its wild boar sausages and black truffles, and as the birthplace of St. Benedict, founder of Western monasticism. Now Norcia is gaining attention for something else: its singing monks.

Seventeen monks from St. Benedict Monastery have recorded their sung community prayer on a CD called “Benedicta.” Their offering of Gregorian chant, Marian hymns and prayers and sung passages from The Rule of St. Benedict, has topped the Billboard charts in classical traditional music for several weeks in a row, captivating listeners far beyond this monastery’s walls.

I had the opportunity to meet Father Cassian Folsom, the American-born prior of the Norcia monastery, when he was recently in New York. He is a serious, but not somber man who looks the very image of a desert monk: a bit too thin, close-cropped hair, full beard and quiet voice, as if his speaking somehow would disturb the universe. Still, he’s been doing a great deal of talking lately with the success of the CD. Often, he is asked to define what makes monastic music unique—why it fills listeners with what he describes as “an experience of serenity and peace, the calming of agitation.”

“There’s a real hunger and thirst that people have, even non-believers, for something or other which they generally call spirituality,” he says. “And that makes good sense because we were made for something more. People don’t get that something more in everyday society, so they look for it in special moments. And if the CD can respond to that need, then we’ll be very pleased.”

Sung prayer is as essential to a monk’s existence as his daily bread. The Norcia monks pause for community prayer eight times a day, not including daily Mass.

“If you add it all up, it’s probably five hours maybe of singing every day, rain or shine, 365 days a year,” he notes. “It’s a way of expressing our love for God. When a monk gives his life to God, he has to express that not just in an intellectual way. Singing involves the whole body and the mind and the soul, and so it’s a wonderful way of keeping this relationship between God and the monk.”

Across the country, sacred music is experiencing a Renaissance. The Benedictine Sisters of Mary, Queen of Apostles, who live on the Great Plains in Gower, MO, topped the Billboard charts three times in the last two years with their chant. The Dominican Sisters of Mary from Ann Arbor, MI have also recorded their community prayer.

Increasingly, monasteries are recording their music to celebrate milestones, as did Mount St. Scholastica Monastery and St. Benedict’s Abbey in Atchison KS when they marked their 150 years in that community.

Father Cassian says he wanted to be a priest from boyhood. “Then, of course, during high school years, I abandoned the whole project, but the nagging came back with a great force as a college student.” He had been active in his high school’s choir and band, and was studying voice at Indiana University when he says he felt a call to monastic life. He entered St. Meinrad Abbey near Ferdinand, IN in 1979.

There had been no monks in Norcia 200 years. They were evicted in 1810 under Napoleanic laws during a wave of anti-clericalism. Fifteen years ago, the citizens of Norcia petitioned the Abbot Primate of the Benedictines, seeking the monks return.

“There’s only about 5,000 people in the township of Norcia and they gathered about 5,000 signatures, even though that’s not exactly how things work in terms of superiors making decisions,” Father Cassian recalls. “But that demonstrated their enthusiasm.”

At the time, Father Cassian was assigned to the Benedictine center at Sant’Anselmo in Rome. He was sent with two other monks to re-found a monastery in St. Benedict’s birthplace.

“The enthusiasm of the people has remained very high and I think that’s because St. Benedict is the patron saint of the town, so he means a lot to people,” he says. “To have the monks back after almost 200 years helps to complete the identity of the town. So it’s almost as though, if the monks are there, then everything’s going to be okay.”

There is an intangible allure common to all monastic music. The gentle tones of Gregorian chant, and the sound of so many voices singing as one, give this kind of music a calming, other-worldly quality. It is also unique because, at its core, it is not a performance. It is prayer.

“This kind of music—we would call it perhaps ethereal,” Father Cassian says. “It lifts the heart out of ordinary concerns into the realm of the divine. The composers, they’re mostly anonymous, their music was inspired by faith, and so if their hearts wanted to soar to God, they would create music that did that. Now, we don’t really live in an age of faith today, but that music still tugs at our heart.”

In other words, it just wouldn’t be the same if sung by Nora Jones or even Andrea Boccelli.

“You have to believe what you’re singing. That comes out, I suppose, in the emotional quality of the voice. As monks, we not only believe what we’re singing, we sing this all the time. It’s not just for a special occasion. So it comes with a certain naturalness, an almost effortlessness that comes from long experience.”

Christopher Alder, a Grammy-winning producer from England, traveled to Norcia to oversee the recording sessions. “The chant that we record means something to them,” Alder says. “You can hear that in the sincerity of their singing. It does have something in the best sense that’s hypnotic, or meditative. It has something eternal to it.”

Traditionally, monks have had to be self-supporting. So when the Norcia monks aren’t singing—or praying—they work. They brew beer—a premium variety called Birra Nursia.

They learned the secrets of brewing from Trappist monks in Belgium famous for their ales. A renovated garage below the monastery serves as a brew hall and the basement is a bottling room. Five of the monastery’s 17 monks are assigned to a “brewing team”—and all 17 work shifts at bottling time. Twelve of the Norcia monks are Americans.

Birra Nursiahas the distinction of having been served at the papal conclave in 2013 that elected Pope Francis. And yes, the Norcia monks also do occasionally toss back a few cold ones.

Their beer has proved even more of a “drawing card for evangelization,” as Father Cassian puts it, than the music. “Even if people are not churchgoers, everybody likes to drink beer,” he says. “So they come to the monastery for the beer and pretty soon they start talking about other things, other more important things.”

Lately, Father Cassian has been thinking about some important matters of his own. The 63-year-old monk has been diagnosed with a recurrence of cancer—the multiple myeloma he first battled in 2006 and thought he had beaten.

“As with anybody who is diagnosed with cancer, it changes your life,” he says. “I think it’s given me greater patience, greater tolerance. Looking at things as not everything matters as much as you might think it does. You take a longer view.”

His illness came on him so abruptly, he says he had to have some heart-to-heart conversations with God. The fear of death was real.

“So much is unknown. Even though our life might not always be very pleasant, it’s the only one we know. And you have to let go, you have to let go of everything to pass through that veil, and we don’t want to.”

Eventually, he arrived at a place of acceptance.

“We can look at death as either a thief or a messenger,” he says. “A thief comes and steals what is most valuable to us, and we’re afraid. But a messenger comes to tell us our beloved is at the door. [Death is] not that sort of primal evil that we perceive it to be. It becomes a gateway to being with the Lord, and we as monks dedicate our lives to being with our Lord. If the only way we’re going to enjoy his presence in the end, ultimately, is by passing through that veil, why should we be so eager to avoid it?”

Father Cassian says his illness also has brought him closer to the people of Norcia. “Anyone nowadays who gets diagnosed comes to me because there is an immediate kind of bond there. So what it has done, aside from the acceptance of death, is make me more compassionate to those who suffer similar things. So in a strange and paradoxical way, it’s been extremely positive.”

His cancer currently is in remission, but he has been told it can return, and may be fatal the next time. The monastery’s sung prayer has become an even greater source of comfort for him, one he is eager to share with others.

With the monastic community now firmly re-established in Norcia and with its CD as part of his legacy, Father Cassian says he feels that when the time comes, he can leave this world with the words of his lips of Simeon, an old man mentioned in the gospel of Luke. After seeing the infant Jesus, Simeon says, “Now Lord, dismiss your servant. Let him go in peace.”