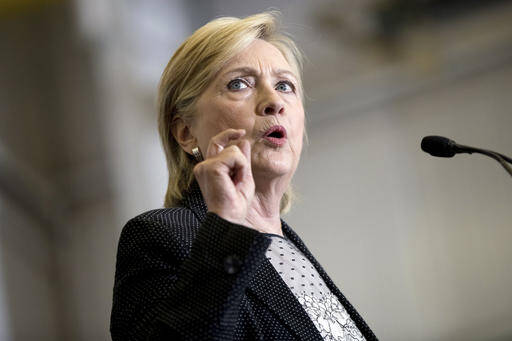 More than half of all U.S. Catholics (52 percent) would cast a vote for Democrat Hillary Clinton if the election were held today, compared to just 32 percent for Republican Donald J. Trump.

But when broken down by ethnicity, the numbers diverge. More than three in four (76 percent) non-white and Hispanic Catholics would pick Clinton, with 13 percent choosing Trump.

Among white non-Hispanic Catholics, Clinton holds a much smaller lead, 44 percent to 41 percent.

White Protestants constitute Trump’s most supportive segment of religious voters, a group he credits with helping him defeat more than a dozen G.O.P. rivals earlier this year.

Six in 10 (62 percent) white evangelicals say they would vote for Trump today, while 47 percent of white mainline Protestants pick Trump.

That comes from a new survey by the Public Religion Research Institute, whose findings mirror a similar poll conducted earlier this summer by the Pew Research Center.

RELATED: Trump Makes a Place for Faith and The Private Faith Life of Hillary Clinton

Trump’s trouble with Catholic voters was foreshadowed during the primary season, when a group of reliably conservative Catholics urged their fellow believers in the Republican Party to resist Trump, even after he had all but sewn up the nomination.

Those concerns were renewed this week when The Hill reported on comments made by the newly tapped C.E.O of the Trump campaign, Stephen Bannon. The former head of the conservative website Breitbart News had accused the Catholic Church of supporting immigration reform only to boost its own membership.

“I understand why Catholics want as many Hispanics in this country as possible, because the church is dying in this country, right? If it was not for the Hispanics,” he said in March during a radio interview with Princeton University Professor Robert George, a member of the Catholic “Never Trump” movement.

During that interview, Bannon also lashed out at Speaker of the House Paul Ryan, a practicing Catholic, accusing him of “rubbing his social-justice Catholicism in my nose every second.”

Some Catholic leaders have lamented that the 2016 presidential election fails to offer good choices for Catholic voters.

“American Catholics, however they end up deciding to vote, have good reason to be frustrated with the choices they face in both major parties,” wrote Archbishop Charles Chaput of Philadelphia in a column earlier this month.

“As Catholics we uphold dignity of all, most especially the poorest and most vulnerable in our world,” he wrote in a letter. “We must grapple with the fact that no one party or candidate represents all my thinking or the Church’s thinking.”

Nearly seven in 10 (68 percent) of U.S. Catholics say they support same-sex marriage, up from just 35 percent in 2003. At the same time, Catholics are about split when asked if support for same-sex marriage goes against their religious beliefs (45 percent say that it does).

About six in 10 Catholics (63 percent) say businesses should not be allowed to refuse services to gays and lesbians based on religious objections.

The numbers are switched for Catholics, with 49 percent saying the church is friendly and 45 percent who say it is not.

While U.S. bishops have made fighting same-sex marriage a priority for several years, just 37 percent of Catholics report hearing the issue discussed by their priest in the past few months.

They have advocated for the Republican Party for years now on the sole issue of abortion.

I believe Republicans are the more moral and responsible party on a number of issues, of which abortion is one. For example, what has Democratic policies done to the Black community in the United States. I am anything but a fan of Donald Trump because he is essentially a liberal Democrat who managed to get the Republican nomination based on fears the country was changing dramatically before their eyes. But on the Democrats and race policies he is exactly right. Here is his speech from a couple weeks ago. http://bit.ly/2bvciiT Some comments on this speech

Trump points out that African-Americans have sacrificed greatly for this country, fighting and dying in every war we fought. They provided the conscience for the country during the Civil Rights era. Despite these sacrifices they have suffered and about 40% live in poverty and few young Blacks are working. This has to change.The African American voter deserves a better future but the Democratic Party has not and will not provide it. Democratic policies produce poverty, unemployment, poor schooling and failed homes. We should hold these politicians accountable for the harm they have done.A good example is Detroit. Forty percent of Detroit resident live in poverty and half do not work. It is one of the most dangerous cities in the country and Democrats have run this city for generations. The same policies embraced by Hillary Clinton have caused this devastation. Hillary is proposing policies that take jobs from African American workers, opposed schools choice and advocates open borders. On top of that she will drive out business because of high taxes. She has a track record of giving jobs to other countries.So it is Hillary Clinton that is the bigot who only wants the votes of Blacks, not a good future for them. There is no lost in changing from these policies and trying something new.Donald Trump August 2016 - See actual speech for Trump’s own language

For a synopsis of what caused the problems in the Black community this video provides most of the answers http://bit.ly/29FGdBN So I find the name calling very ironic since it uses the term racist while the deterioration of the Black community over the last 50 years can be attributed to Democratic policies. They run every major city in the United States and have done so for generations. An aside: my excerpts of Donald Trump's speech were taken down by someone at America on another post so I paraphrased them above after learning why.
Chuck Kotlarz
6 years 3 months ago
“… Republicans are the more moral and responsible party on a number of issues, of which abortion is one.” Since 1980, the abortion rate has declined 11% with the Pro Life party in the white house and declined 30% when the Pro Life party was not in the white house.