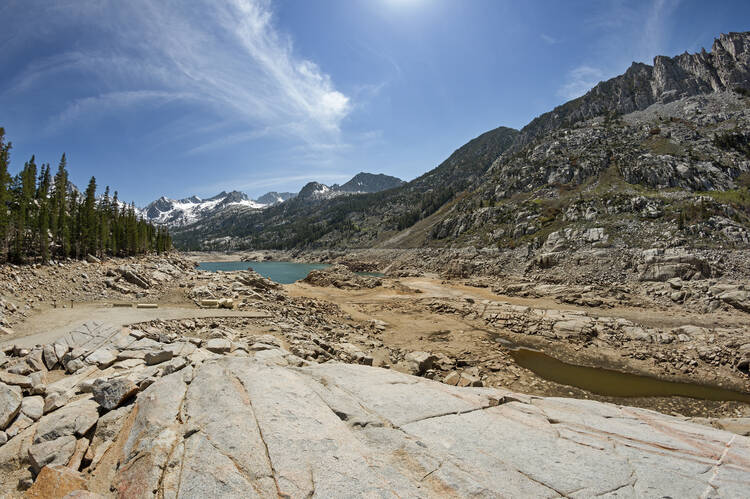 Over the last few weeks I've been talking by phone to a wide variety of prominent Catholics in California, getting their reactions to "Laudato Si.’" This week, I'm posting some of their responses.

Among those I’ve spoken to have been a number of California’s bishops, including Archbishop Salvatore Cordileone, archbishop of San Francisco since 2012; Bishop Michael Barber, S.J., ordinary in Oakland since 2013 (Bishop Barber also spoke to my colleague Sean Salai, S.J.), and Bishop Stephen Blaire, who has presided in the diocese of Stockton since 1999. In my conversation with Blaire I also spoke with Katelyn Sutter, the director of the diocese of Stockton’s Environmental Justice Program, which since 2005 has been working for better environmental awareness and practice within the diocese and state.

Shared among all of them was a clear enthusiasm for the new document. “I find 'Laudato Si'' hopeful and insightful,” says Archbishop Cordileone, “beginning with the theme of ‘Our Common Home.’ I think that’s a wonderful image to use for how we should approach care of the environment.” He points out, the Greek word for ‘home’ is ‘oikos’. “From [that word] that we get the words ecology, economy and ecumenism. I think that points to what we’re talking about, how all of these issues are interconnected—care of the environment, care of the poor, care of the family.”

Bishop Barber likewise considers the encyclical “a great moment for the Catholic Church, the moral authority we still have.” He marvels at the response the pope has received: “Look at how the whole world is receiving or reacting to the encyclical. Who else can speak to the whole world with a moral voice? You tell me; I don’t think there’s anybody out there. Maybe the Dalai Lama would come next.”

In Stockton, Bishop Blaire believes that the encyclical has much to say to the issues of his diocese, such as drought, poverty and the reverence for creation: “We have some of the most beautiful areas in the Yosemite Valley, and people are very much concerned about caring for its beauty. But that doesn’t always translate into actual care of our particular area, especially when you try to relate things to the economy and jobs.”

All three bishops also acknowledged the range of reaction thus far to the encyclical. Says Cordlieone, “The pope has some pretty sharp punches. The end of paragraph #54 really jumped out at me:

The alliance between the economy and technology ends up sidelining anything unrelated to its immediate interests. Consequently the most one can expect is superficial rhetoric, sporadic acts of philanthropy and perfunctory expressions of concern for the environment, whereas any genuine attempt by groups within society to introduce change is viewed as a nuisance based on romantic illusions or an obstacle to be circumvented.

“That packs a pretty strong punch, a very sobering call to those of us who live in wealthier nations, an emphasis on stopping the waste. There’s so much waste; we have to be wise stewards.”

Barber likewise acknowledges that when it comes to the science behind what the pope is saying, a deeper scrutiny is entirely valid. “We have to be able to defend ourselves on this point. If our science is wrong then the whole encyclical could go down the tubes.” But he thinks to see the encyclical as a scientific document is to misunderstand it entirely. “The pope has said, ‘I’m not teaching about science but care for the earth.’ So he’s not tying himself to certain scientific theories. But he is saying look at the overwhelming evidence, of consumerism, trashing society, elevation of the first world over others when it comes to resources.

“I have been on the Marshall Islands. The sea level is right up there; it’s coming into people’s homes. We’re so well protected [here]; but for these people, none of this is optional.”

“We don’t like hearing those parts,” notes Barber. “And I think the same is true of encyclicals or church teaching. We can easily grasp onto just the parts we like. But there are also parts that are challenging. Church teaching is supposed to challenge us.”

Blaire and Sutter note the particular impact of "Laudato Si'" on farmers. “The farmers were the original environmentalists,” says Blaire. “They love the land, and they care about the land, and they care about the future. But at the same time, they have been influenced by all the technological, hydrological possibilities, and some of them look like they have made the land more productive, but not necessarily more sustainable.”

“These are not easy questions,” says Blaire. “These issues have not only very real environmental implications but implications for people’s jobs and how they can sustain their families. And there are no simple answers."

The key, he believes, is a dialogue marked by a deep mutual concern. “We need to be not only in dialogue, but in dialogue with a great deal of compassion for the struggles people are facing and will continue to face. Whether they are farmers who are going to have to sell their land or farmworkers out of a job, we have to have compassion for all of these situations.

“We have to have mercy on each other, to acknowledge that we all are complicit in this, and stop with the finger pointing.”

But how do we get to that place? Indeed, how do we inspire our communities to be open to that change of heart that the pope is calling for? For Archbishop Cordileone, “It’s about instilling a sense of altruism. Thinking of the other and putting God first. When God is first everything else is rightly ordered in terms of our human relations.”

It’s also, he says, about creating a sense of solidarity. “When I have confirmations or some other opportunity to interact with young people, often they tell me about these service projects, opportunities to reach out to people who are poor and hungry. And it’s kind of a life changing experience. They always say ‘They’re so poor but they’re so happy, they’re so appreciative of whatever we did, and all we did was give up a day of our lives.’ That’s solidarity—everyone has something to give, everyone has something to receive from the other.”

For his part, Barber thinks the key is your starting point. “You don’t start with the science. You start with Catholic theology, moral teaching, the Scriptures, Christ’s example. Take a step back and look at the big picture, how the whole vision of the universe is God-centered, not human-centered.”

Blaire emphasizes the long view. “I think this is an educational process,” he says, starting with the formation of priests: “Some of the key teachings the Holy Father is lifting up in his encyclical, the seminaries will have to look at in their curriculum. How is our pastoral approach emphasizing care of the poor, and how are these questions about the environment pertaining to our everyday pastoral ministry.”

And looking to the people and parishes of the diocese, Blaire believes “we’ll have to be creative about how to lift the consciousness.” Noting that “it’s unrealistic to think that most people are going to sit down and read the whole encyclical from beginning to end,” Blaire sent the Vatican Information Service’s summary to all his priests and may do the same for parishioners.

Meanwhile Sutter’s Environmental Justice Program has been working with the communication department of the diocese to offer resources for parishes on the diocese’s homepage, and is developing programs that could be used in parishes, youth groups, RCIA classes or elsewhere in the fall to talk about the encyclical and what it means for our faith. “It seems rather simplistic, but I think it’s important to help parishes with things that are ready made. We’re not creating more work for our priests, but we’re bringing them a package with some education, some concrete actions and other resources.”

“I put these as questions, because it’s a dialogue. But I think these are things we should be considering in our lifestyles, in our day-to-day consumption."

Cordileone agrees. “I think the issue of waste is something that everyone could do something about. It’s a sort of old fashioned virtue—I was raised by parents who grew up in the Depression; they had to recycle, they had to conserve. But that was imposed by necessity. We’re better off now than they were then, so we have to be more intentional."

In the diocese of Oakland, Barber finds another important invitation here as well. “I’ve gotten a lot of critical emails from wealthy Catholics, people who have helped the church a lot. And I would say to them, As bishop, I’m not trying to attack you or put you down, because a bishop’s role is to unite.

“But what’s more important to you, your economics or your faith? Are you more wedded to your economic theory, even if it’s a certain form of radical capitalism, than your Catholic faith? Or will you trust the pope and the church’s social teaching to at least open your eyes and consider that we may not have it all right on everything?”

Jim McDermott
@PopCulturPriest
Show Comments (
2
)
Comments are automatically closed two weeks after an article's initial publication. See our comments policy for more.
John Walton
6 years 6 months ago
Barber asks: “But what’s more important to you, your economics or your faith?" -- there is a parallel question which should be asked, "What is more important to you, your liberty or your faith?" Were the pews bursting with the faithful on Sunday Morning, I would gladly take a lesson in Marketing 101 from Bishop Barber.
MaryMargaret Flynn
6 years 6 months ago
Pope Francis is saying true freedom consists in solidarity. Our current neo-liberal capitalism and individualism combined with technology is destroying the earth's biodiversity and ability to recover from the assaults of us fouling our home with so much pollution and destruction and possibly in a few hundred years will lead to extinction of the rational animasl causing the trouble. Too many wounds to our body the world; we are not independent monads but interdependent communities of life.