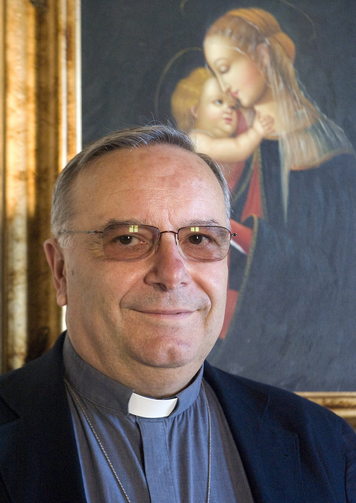 Archbishop Francesco Montenegro, 68, serves the Archdiocese of Agrigento on the southeastern coast of Sicily, a population that includes some 449,000 Catholics and extends 130 miles into the Mediterranean Sea to the small island of Lampedusa.

Since 2011, over 300,000 refugees from wars in nearby Northern Africa have fled to Lampedusa seeking asylum. Thousands of others have died in transit, including nearly 4,000 last year alone, according to the United Nations High Commissioner for Refugees.

Archbishop of Agrigento since 2008, “Don Franco” has been a tireless advocate for migrants, calling them “a sacrament of God’s presence to us” and inviting newly-elected Pope Francis to come to Lampedusa, which he did in July 2013 as his first official pastoral visit outside of Rome. “Immigration,” Montenegro said in 2013, “is not an ‘emergency’; we must have the courage to stop using that word.”

Former President of Caritas Italy and current President of the Italian Bishops’ Commission on Migration, Archbishop Montenegro was first appointed bishop in 2000, after 30 years a priest. His episcopal motto is “Caritas Sine Modo”—“Love without Limits.”

How do you feel about being named Cardinal? How has your family reacted?

After the celebration of the Mass, the people from the parish came and told me: "Pope Francis made you a cardinal!" I thought they were joking. After a while they called me and officially confirmed. At that moment I believed the news.

I was confused, I felt I had one more responsibility to accept. The pope loves the "suburbs" of the church, not the centers of human and political power. So I understood: this is a kind of award for the land of Agrigento and the people of the Lampedusa Island, where the migrants reach Europe from Africa. Pope Francis chose Lampedusa as his first trip outside Rome. He came here and he said that in this land poverty and providence can walk together. If I become a cardinal, I’m happy for these people of Agrigento and Lampedsa, as it recognizes their efforts. To become Cardinal is a service and is also a way to see that the Pope trusts us, but we have also to deserve his trust.

What do you hope for the church today?
I want the Church to learn from people who have nothing, to walk with those who are miserable. I was born in a poor family, I had very difficult times, but I learned a lot. Without this, the church is going nowhere.

What is one message you feel the church should be offering to today’s world?
We have to be proactive. Fight for freedom, understand nowadays people. If we have freedom we can have dignity. If we help people in need, we have dignity. You can’t go to the store and buy this, this comes from you, from your decisions. People from Lampedusa, for example, have to be admired for their dignity in welcoming migrants. To open your own door is not easy, but it is the only way to meet other people.

What are the most pressing issues facing your region and community?
Our land lives in a difficult context, with mafia and organized crime. We can’t forget this. "Gaudium et Spes" reminds us that a Christian person can’t stay on a side of the road watching others walking, the Christian person has to walk with others. We have to fight. And to change things, we have to work together, helping each other. Of course we have many problems, like indifference, laziness, cynicism. But what is "mafia"? If I think that I’m more important than others and my power can stop others or make their lives miserable, this is already mafia.

So we can’t accuse others without examining ourselves. We need to ask: “What can I do for this land, for this city, for my people?” Everyone should say, "This is my duty, this is my mission."

What has your region and your community taught you about God and the church?
This is a land of welcome and acceptance. Lampedusa and the Mediterranean Sea—the migrants are coming here every day. This land deserves everybody’s support, both from Italy and from Europe. Migrant people are our brothers. I was president of the National Italian Caritas. We can’t deal with migrants only with police. Because these migrations are not something we can stop; to migrate is not a whim or a fancy, for these people it’s a way to survive war and poverty, hunger and death. Not one of these migrants comes here in order to be a tourist. They are running away from horrible situations. Especially the women.

The world has to understand these problems and find solutions. But we can’t fight the migrants, they are the victims. Believers and non-believers have to come together and create a new order of solidarity. To be different is a richness more than a problem.

What’s an image of God, passage from Scripture or figure from church history that you look to for support and encouragement?
For me Mother Teresa was very, very important. We can’t help many people but we can keep each of them in our heart. This is important, to recognize the dignity of every person. We can help each other on this, and we can come together as brothers and sisters before God our Father. He’s not forgetting anyone.

Finally: What are your hopes for next October’s Synod?
I hope the Church can recognize once again that the family is the central pillar of every human society. And there are many new ways of acknowledging people from different cultures and sexual inclinations: like Pope Francis said, “Who am I to judge?” The Church can only listen and understand and be brave on recognizing the uniqueness of everyone.