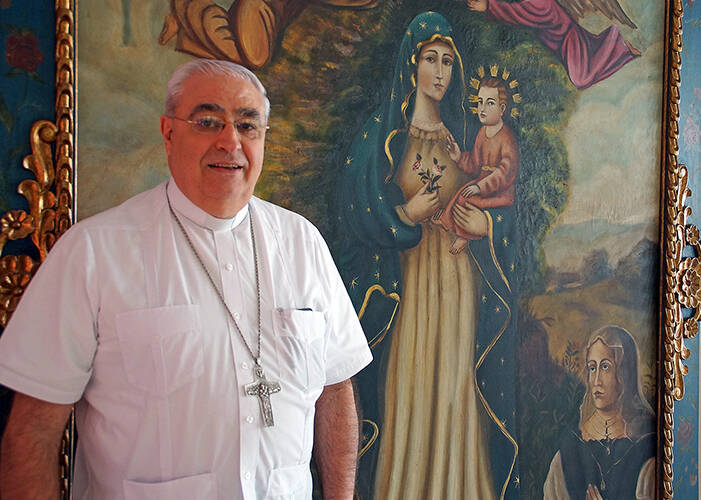 When Bishop José Luis Lacunza Maestrojuán, O.A.R., 70, ordinary of the diocese of David, Panamá, was told he was being elevated to the role of Cardinal, he thought it was “crazy.” And the fact is, although Panama was in fact the home of the first Catholic diocese in the Americas, it has never in its 500 year history had a Cardinal. Neither has the Order of Augustinian Recollects, which Bishop Lacunza first joined in 1967. (It’s also likely no new Cardinal has ever found out about his appointment via WhatsApp, a smartphone messaging application. His sister wrote to ask him, “You have nothing to tell me?”)

Originally from Pamplona, Spain, Bishop Lacunza was sent to Panamá by the Augustinian Recollects early in his priesthood and spent years there serving as rector in schools and president of the Federation of Catholic Schools. In 1986 he was consecrated an auxiliary bishop, and in 1999 he was made ordinary in the diocese of David, an agricultural region in the southwestern-most part of Panamá.

Today Panamá has a population of 4 million people; recent years have brought an economic boom. Yet Lacunza notes how little of that has trickled down to the poor, especially in such a Catholic nation: “One cannot help but be astonished that the majority of Panamanians, 80 to 85 percent, say they are Catholics...and that Panamá is a society of so much inequality, where more than 30 percent of the population lives in poverty, with spectacular levels of growth.”

As bishop Monsignor Lacunza has worked to mediate conflicts between indigenous groups, government and corporations on things like water rights, mining rights, deforestation, the construction of dams. In 2013 an independent expert sent by the United Nations noted the precariousness of indigenous communities due to investment projects from outside.

For his part, Lacunza has said that he feels it is his mission as bishop “to work among the poor, with the poorest, that is, the indigenous people of the Ngabe-Bugle region,” a people who “have been forgotten for years.” Upon receiving an honorary degree from a local university in 2012 for the work he had done, he called the degree “an undeserved recognition for a person with so many faults and errors."

How do you feel about being named Cardinal? How has your family reacted?
First, surprised: they neither consulted me, nor in my dreams did I ever imagine it. Second, still overwhelmed, not quite processing it. I imagine that when I arrive at the public consistory I will land in reality.

What do you hope for the Church today?
We who are living the Aparecida event [2007 meeting of bishops from Latin America and Caribbean] and who, in one way or another through CELAM [Conference of Catholic Bishops in Latin America and the Caribbean] have shared dreams and hopes for our church. We hope that the church will be faithful to the plan of Jesus: to proclaim the Gospel to the world. Therefore in the church, everyone and everything, people and structures must be seen and project themselves as missionaries in the style of Jesus: close, warm, compassionate. In the church, a Catholic that is not a missionary is a "contradiction in terms."

What is one message you feel the Church should be offering to today’s world?
It must be like Jesus, a witness to the merciful love of the Father. That is our main contribution. We know that the world hopes and asks for the presence and the word of the church on many cultural, economic, social, political and environmental issues. And we cannot fail, but without forgetting that our fundamental word and our key witness is to make present the Good News: God loves us. Without that, we could be the most skilled, and we would not be the most qualified.

What are the most pressing issues facing your region and community?
In the socio-political aspect, the issues of inequality, of corruption and democracy.

In the ecclesial aspect, the coherence between faith and life and vocations to the consecrated life and the ministerial priesthood.

What has your region and your community taught you about God and the church?
About God, to look to him as Father. It is the great lesson of simple and humble people: confide in Him, cling to Him.

About the church: that in her we have room for everyone and we all have something to contribute. Also here the simple and humble teach us to bring everything we are and have.

What’s an image of God, passage from Scripture or figure from church history that you look to for support and encouragement?
I am an Augustinian Recollect, and therefore Augustine is my great reference. His word, his writings remain valid and set the tone for my personal and pastoral life. And, in that same order, the figure of St. Ezekiel Moreno, bishop of Pasto, canonized by John Paul II in Santo Domingo on the eve of the 5th Centenary of Evangelization, is for me an icon of the New Evangelization.

Finally: What are your hopes for next October’s Synod?
The family is the cornerstone of the church and Society. It is very significant that Pope Francis has brought this to the fore as a priority and through two Synods. I hope that all Catholics take seriously the call to participate in the Synod by answering the questionnaire. We know that moral issues are not resolved through voting majorities and minorities, but it is very important to hear the voice of the people.