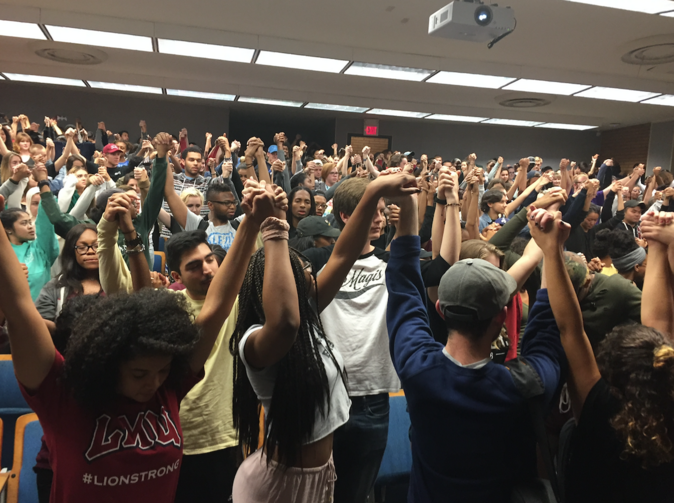 Dispatches from the front lines are written by exhausted people, with little sleep and broken hearts. So it is today with me. Let me tell you why.

It was nine o’clock, a time when most college undergrads are usually scattered around campus preparing for late night studying in the coffee spots, library or common rooms. There might be some adventurous night Frisbee cutting through the air of one of the sports fields, and the lounge may be showing an interesting or intentionally silly film. A university is a small town, full of the beauty made up of the mundane little details of life in any town, with our laundromat, and the pizza place, and the cart with the good coffee, and the one you go to only if you’re desperate for some late night caffeine. I have a long memory of this particular small town of ours, as I also sat for long hours as an undergrad cramming, and stood on a stage in my first university play. This campus is home.

Yet, on this particular November night, nothing seems familiar, the air doesn’t feel the same as we endure a record-setting heat wave. I’m glad I arrived at the large classroom early. Seaver 100 is straight out of a 1970s movie, with large blackboards and worn amphitheater-type desks. I used to have my genetics class here as a sophomore. Tonight, as a tenured faculty member, I make my way to the back and find a seat, because this is their night. The stream of students is endless, they fill every seat, every empty space, bunching up at the doors, and snaking out into the hallway and down staircases. When we begin, they all strain to listen, and many take their turn to speak. The organizing student group, Black Student Union, has called this emergency meeting, but it is clear that “everybody” is here, a variety of colors and faces so beautiful it fills my eyes with tears.

RELATED: How are Catholics reacting to Donald Trump’s unexpected win?

They have a program for this night after the 2016 election and they outline it with care. There are three questions to explore: How did we get here? What are the implications of a Trump presidency personally for you and yours? And finally, where do we go from here?

How did we get here?

The student leaders are unsparing. They talk about their own failure to take Donald J. Trump’s candidacy seriously. They castigate other millennials for failing to show up to vote, they run through demographic data, maps, granular details. They’ve done their homework. The picture that emerges is clear to them and to all of us: The United States is divided along racial lines primarily, and along gender lines secondarily.

They point out the flimsy arguments about the divide being based on economic issues; how can that be since the communities of color who overwhelmingly voted against Mr. Trump are actually the most economically vulnerable of all? Black women, the young woman president of B.S.U. points out with pride, voted 94 percent for Hillary Clinton. The lessons of “how did we get here?” are ones they want to learn, they say, because it will only be by exposing them and transforming them that a future of unity, equality and human dignity will be built. I beam with pride. They have been paying attention in our classrooms, our liturgies and our service opportunities, and now, they feel ready to move into their role of leaders. They turn to the group and ask them to reflect and share about the second question.

What are the implications of a Trump presidency for you and those you love?

Some sit as they speak, their voices quiet, others stand, owning the room. Comments are sprinkled with nervous laughter, and often greeted with approving finger snaps. A few times at first, and then many, many more times as the night wears on, there is thunderous applause. Some weep openly as they speak, others are defiant, the adults in the room listen attentively. This is our student body engaging boldly with the world.
The concerns are complex and in need of thoughtful unpacking, but our students are impressive, out of 18 students who speak there is no repetition, they each open up a new question and articulate it. This is a summary of their major concerns, which need to become our most urgent concerns too. The country is extraordinarily divided. Is there any way back from such polarization? How can there be, they ask, when the issues dividing us are so vital and so personal? They point out the fear of exclusion of LGBTQ people and their basic human dignity. They speak vehemently about experiences of Islamophobia and the demonizing of Muslims. One young woman speaks through tears about her experience as a survivor of sexual assault and the terror of knowing that rape culture has now been normalized. “I don’t know who I can trust anymore,” she cries.
Several students speak as friends of immigrants, and then the room is electrified by the testimony of young undocumented students standing in front of hundreds of their peers, shaking and sharing. “I am a senior, and I am undocumented.” This is a student leader who two weeks ago was at the helm of a highly successful event to raise funds for breast cancer research. It almost feels like that was another life. She explains that if President-elect Trump rescinds the Deferred Action for Early Childhood Arrivals or DACA, there will be direct consequences for her. Her study abroad semester, the first time she would ever be out of the country in her life, will be cancelled, as will her work study and her job outside of campus, because her work permit will be taken away. As she trembles and the students gathered encourage her to continue, she expands on the consequences: no driver’s license, no ability to work after completing college. She wants to use her talents for the common good as we have taught her, but how? More frightening still, the knowledge, that, after doing their very best to follow every single requirement to the letter—registering for DACA, paying the fees and being the best students they can be—they are now in a government database. The adults in the room hang our heads. A while back when the students expressed fear about going through the process we assured them to go through it, confident in the decency and fairness of our system. Now, no longer anonymous, they know the deportation force promised by the new president-elect could come for them.
Just then, one young woman stands. I was with her the night of the election. She is diminutive, an honor student, an extraordinary writer and she is also “undocu” as she calls herself, eschewing the name of DREAMer because it doesn’t include her family. On election night, feeling the painful sting of the country she so much loves rejecting her, she weeps and wonders how quickly her family might flee. Yet, tonight, surrounded by the love of her fellow students she stands up and declares “I’m not going anywhere!” The applause can be heard reverberating through the entire campus.

Where do we go from here?

There’s sobbing now, crying I will encounter repeatedly over the next few days and which as of this writing has not waned. But this night, as they talk with each other, these young people notice the powerful coalition that is present and being born. They are black kids, and Latino kids, and white kids, and Asian kids, and Muslim kids. They are straight kids and gay kids. They all note that what binds them is the very idea of “us” and that if the promises of the campaign are to be believed, this next administration will actively promote exclusion, xenophobia, religious intolerance and misogynist attitudes. As one says pithily, “it’s not that we are against one person, it’s that that one person is against all of us, those we love and the values we share.”

I see the fear in their eyes but also, as St. Ignatius of Loyola might say, I see the fire of love lit inside each of them, love for one another. The suffering, as with our forebears in the upper room, has forged a new community and has released the Spirit of Christ in this experience of boundless love. Just then, they stream out toward the Chapel of the Sacred Heart. They cross the campus, holding each other in the warm night air. They have no plan; they just need to be there at the chapel. I watch them, young and vulnerable under the dark sky and marvel at their new and flowering courage and purpose. They look up appreciatively at the gleaming white church with its bell tower and encircle its plaza. The night has become sacred and as one they repeat for each other their promise to “stand with their friends, to give their life for their friends.”
The Gospel has come to life on this night and this, for us all, is the answer to “where do we go from here?”
Cecilia González-Andrieu is an associate professor of theological studies at Loyola Marymount University, Los Angeles, Calif.

Cecilia González-Andrieu
Show Comments (
4
)
Comments are automatically closed two weeks after an article's initial publication. See our comments policy for more.
B Kevin Brown
5 years 9 months ago
Thank you, Cecilia for this witness to the Gospel coming to life in the spirit of LMU's founders: the Jesuit, Religious of the Sacred of Mary and Sisters of St Joseph of Orange. You and your colleagues are doing amazing work to stand with and support the students of LMU as they continue the work of resisting hate in the name of the Gospel. Never have I been prouder to be an LMU alumnus.
Lisa Weber
5 years 9 months ago
A possible good to come of such an awful president-elect is that people will become more active politically. I have decided that I can support the country even though I cannot support Donald Trump. Supporting the country may even mean actively opposing him and his policies the majority of the time. And it is already time to prepare for the midterm elections.
Jeanette Marin
5 years 8 months ago
Thank you for sharing this story. In this time of darkness and fear it gives hope for the future.
alan baer
5 years 8 months ago
Yesterday i said it was hard for me to be hopeful. Now, having read this article, I am.