Trump’s Catholic advisers focus on the Supreme Court, not immigration 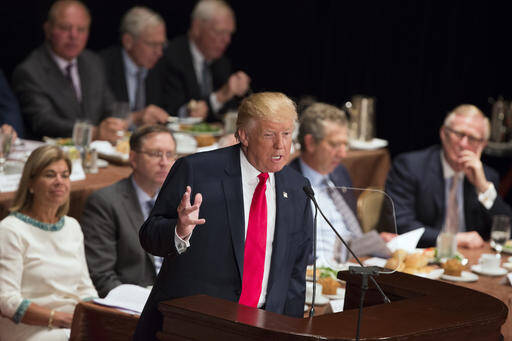 With his popularity among Catholic voters lower than recent Republican nominees for the White House, Donald J. Trump is throwing something of a Hail Mary pass.

His campaign announced on Sept. 22 that 33 Catholic individuals would advise the candidate on “issues of importance to Catholics,” a group that includes a smattering of Catholic politicians, pro-life activists and one Catholic priest.

Joseph Cella, a Detroit-based consultant and founder of the National Catholic Prayer Breakfast, will serve as the liaison between the group and the campaign.

Mr. Cella was one of three dozen Catholic leaders who signed a letter back in March calling Mr. Trump "manifestly unfit to be president of the United States" and urging their fellow believers to do what they could to prevent the real estate mogul’s victory.

But Mr. Cella told America that in the months since signing the letter, he has had “a sincere change of heart and mind." He said his concerns were allayed by Mr. Trump's promise to appoint pro-life judges, particularly to the Supreme Court. He pointed to the selection of Governor Mike Pence of Indiana as evidence that Mr. Trump will surround himself with more traditional conservatives. (Mr. Trump has said in the past he supports abortion rights, and he expressed admiration for Planned Parenthood, even during the 2016 campaign.)

“Mr. Trump has promised to appoint justices in the mold of great Catholic jurist and thinker Antonin Scalia,” he said. “Hillary Clinton has promised to do just the opposite, and that will have far reaching and long-lasting implications for the Catholic Church and the lay faithful, on everything from pro-life issues to religious liberty to health care in ways we can’t fathom.”

Another member of the committee echoed Mr. Cella’s concerns about the Supreme Court.

“The choice for Catholic voters in this presidential election could not be more stark,” Faith Whittlesey, a former ambassador under President Ronald Reagan, said in a statement.

“Trump will fight for Catholics in defense of life, and their religious liberty, and appoint nominees to the Supreme Court who will protect these same rights for many years to come,” she continued.

The Rev. Frank Pavone, head of Priests for Life, told America he jumped at the chance to join the group in order to help bring greater clarity to Mr. Trump’s proposals.

Father Pavone dismissed concerns that priests should not endorse specific candidates, saying the church and its priests have a duty to inform candidates “unless the church wants to become irrelevant.”

Many Catholic bishops have publicly expressed concern about Mr. Trump’s plans on immigration, calling out the candidate for using xenophobic language and proposing to deport 11 million undocumented people, which would break up families, while building a wall along the U.S.-Mexico border.

Mr. Cella, who said the Catholic advisory group began with informal conversations back in June, said that Mr. Trump’s immigration proposals are not in conflict with church teaching.

“It’s really an opportunity to address the safety and security of our country, of our communities and civil order, and that’s something consistent with Catholic social teaching,” he said.

“Mr. Trump himself has said that while there will be a wall, a reasonable means of enforcing and tracking the flow of people in and out, there will be a door in the wall as well, meaning a system that is orderly compared to the system we currently have,” he said.

Reaching out to Hispanic Catholics, who constitute anywhere between a third and one-half of the United State’s roughly 70 million Catholics, is a goal of Mr. Trump’s Catholic outreach, Mr. Cella said, but he declined to elaborate on how they would do this.

Meanwhile, the Clinton campaign, as it courts Catholic voters, has promised to propose immigration reform with a pathway to citizenship for undocumented Americans within the first 100 days of a Clinton presidency.

Last week, the campaign held an off-the-record conference call with Catholic supporters and Mrs. Clinton’s running mate, Sen. Tim Kaine, himself a Catholic. (Governor Pence, Mr. Trump’s running mate, describes himself as an “evangelical-Catholic,” or someone raised Catholic who worships in an evangelical Christian church.)

For his part, Father Pavone said that if asked, he would explain to the campaign what the church believes about respecting the rights of families when it comes to immigration reform.

But, he said, specific policy proposals are the jobs of politicians, not pastors.

“There is no such thing as a Catholic public policy, that unless you affirm this specific policy in all its details you are not Catholic,” he said. “The Catechism doesn’t have the law written in it for the president to sign.”

Other members of the Catholic Advisory Group include several sitting members of Congress, as well as former U.S. Senator Rick Santorum. Trying twice to capture the G.O.P. nomination for the White House, Mr. Santorum came up short in 2012 and 2016. He was an early supporter of Mr. Trump, appearing alongside the eventual nominee even before suspending his own campaign earlier this year.

Several sitting members of Congress are included on the list, as is former Governor Frank Keating of Oklahoma. As governor, Mr. Keating proposed tightening rules about who would be eligible for the death penalty but remained a supporter of the practice, which led to a clash with his bishop in 1999.

Years later, Mr. Keating argued in favor of immigration reform, calling it “the most Republican of causes.” He dismissed the notion of building “razor-wired walls” along the U.S. border, a key campaign promise from the Trump campaign.

In 2012, Mitt Romney won the public support of six former U.S. ambassadors to the Holy See, three of whom went on to endorse former Governor Jeb Bush’s unsuccessful bid for the White House in 2016. Just one from that group, R. James Nicholson, is part of Mr. Trump’s Catholic team.

Both Mrs. Clinton and Mr. Trump will have a chance to make their cases to a prominent Catholic audience next month. They will both attend the Al Smith Dinner in New York City, a fundraiser for Catholic Charities, where the pair will be seated alongside one of the American church’s most influential figures, Cardinal Timothy Dolan.

The full list of Trump’s Catholic Advisory Group, as provided in a campaign statement:

Michael J. O’Loughlin
@MikeOLoughlin
Show Comments (
5
)
Comments are automatically closed two weeks after an article's initial publication. See our comments policy for more.
Lisa Weber
5 years 10 months ago
I find it hard to believe that any faith-based group could support Donald Trump for any reason. If he has done anything of value for this country, it has been showing us the ugly side of the USA - incivility and bullying, racism, sexism and a glorification of corruption. If names are any clue to gender, the list of 33 people includes 5 women. That ratio suggests that the agenda of this group is sexist.
william lupinacci
5 years 10 months ago
For the Supreme Court excuse to have any logic to it, we must assume that they are either hoping for, or worse yet, praying for, the deaths of current Democrat Justices in the next 4 years. Because if those deaths don't happen then their excuse for supporting Trump is illogical and pointless.
T. D. Blodgett
5 years 10 months ago
Filling the Scalia vacancy alone would be sufficient.
William Rydberg
5 years 10 months ago
Its surprising that Catholics are waking up to the importance of picking a Supreme. In the past, somebody like Brennan would suffice.... Its no secret that the current Crop all belong to the same Faith. More scrutiny is required when picking a Supreme...
Joseph Culjis
5 years 10 months ago
Certain American Bishops should not be giving their positions on issues that Vat II has relegated to the laity. So many Bishops and a few Cardinals have fraudulently represented prudential level statements regarding what we should do as Catholics on immigration as Catholic Social Teaching. The reference to "breaking up families" is mere sentiment designed to move people on an emotional level. Apparently they are attempting to raise a made up moral imperative "Thou shall not break up families" above all other considerations when it comes to immigration. This is dishonest and irresponsible. Such tactics undermine the small amount of credibility the Bishops have at the end of so many scandals and failures to act in areas of legitimate concern. The Bishops have spent their credibility, on Progressive/Liberal causes, have ignored the secularization of the Church's institutions, have failed to pass on the faith to succeeding generations, have mishandled a multitude of clerical abuse cases, and on and on. And now they want Americans to continue immigration policies that may be destructive to American culture and the nation in so many other ways. It is astounding how the Bishops attack Trump but say nothing about the virulent anti-Catholicism of Liberal Democrats with their Secular Liberalism. The Liberal Democratic Party promotes artificial means of birth control, and abortion. It advances sexual immorality and the LGBT radical agenda. It is the Liberal Democrats that have for 40 years done everything in their power to "break up the family". It is the Democrats that have initiated attacks on the church, as an institution. It is the elites of the Democratic Party that will do whatever it takes to destroy the church. It is the Democrats who have given free reign to the Secular Liberalism that now dominate our educational institutions. It is Liberal Democrats that have created a mass media that has created an anti-Christian popular culture. YET WE NEVER FIND THE BISHOPS SPEAKING TO THESE ISSUES. The Bishops have supported the de facto socialism of the Liberal Democrats. They have supported big government. They support the very same government that is controlled by Secular Liberals and is working to destroy Christianity and the Church. How can people lend credibility to American Bishops when they are so naive. They should stop promoting the Progressive agenda. The Bishops should stop cooperating with the deviltry of the Liberal Democrats and devote their time and resources to rebuilding the once great American Catholic Church. Rebuild the Catholic Church and they will do much to rebuild America.