Engaging the Culture: A Conversation with Cardinal Gianfranco Ravasi 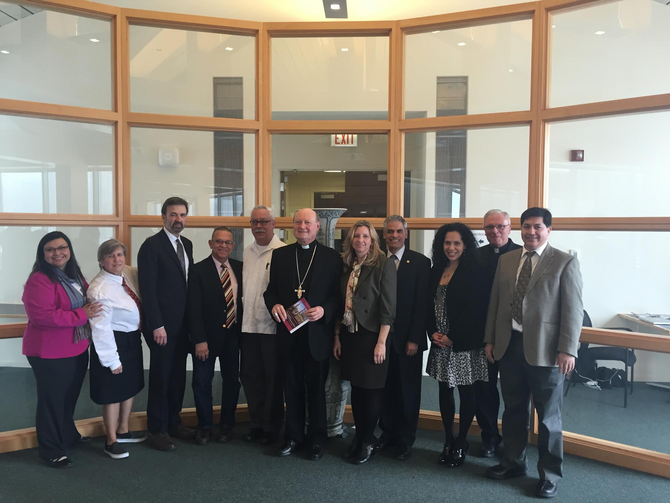 On the day before he departed Rome to attend events at Loyola University in Chicago, Cardinal Gianfranco Ravasi wrote from his Twitter account, “Departing for the country of Dickinson, Poe, Whitman, Melville, Hemingway, Kerouac, F. O’Connor, Salinger, Roth, Bellow, Updike.”

In 140 characters, this 72-year-old tweeter who is president of the Pontifical Council for Culture, a Biblical languages expert and archeology scholar showed he is very much a 21st century cleric – one engaged by the literary life of the U.S. and intrigued by the intersection of religion and culture.

Cardinal Ravasi is widely believed to be a papabile – a potential future Pope. He is also a cleric in the mold of Pope Francis according to those who know both men. Ravasi is an intellectual (the author of 150 texts), who speaks in pastoral tones. He is both gregarious and a good listener, serious about spreading the faith, but open to dialogue. A classical pianist who loves Mozart and Bach, he reveals that he recently listened to a CD by the late rocker Amy Winehouse “because you have to try to understand the music that our youths are listening to.”

The cardinal came to Loyola University to receive an honorary degree and also participate in a conference titled "The Preferential Option for Culture in Latino/a Theology" organized by former Vatican ambassador Miguel H. Diaz who was also installed as Loyola’s John Courtney Murray chair in public service. The conference was a colloquium that brought together the leading Latino/a theologians in the United States to enagage the history of Latino/a Catholics and to discuss the future of Latino/a theology.

The cardinal agreed to a brief interview, conducted largely in Italian, the morning of the conference. He enthusiastically covered a wide range of topics that included interfaith dialogue, the growing number of non-believers or “nones” as they are sometimes called, his childhood in Italy, the first stirrings of his vocation and his love of archeology.

Ravasi was born in Merate in the province of Lecco, east of Lake Como in northern Italy. His father was a tax official who opposed Italy’s fascist government and was separated during World War II from his wife and son for more than a year.

As a four year old, the cardinal says he experienced a piercing insight while listening to the loud wail of a train whistle in the countryside. “This shrill sound frightened me. I felt for the first time the feeling of the end, of death, of the limit of life,” he says. “It changed me. I needed to find something permanent. My religious experience was born this way. It was not a devotional experience, it was more philosophical.”

Ravasi went on to work in archeology*, taking part in digs in Turkey, Iraq, Syria and Jordan. “Archeology is very important in my view because it permits us to understand that man did not start from zero, but is always building upon his patrimony, his heritage.” Archeology drove home for him that religion, or some form of spiritual life, has been a “fundamental tool of existence” through all ages, he says.

He recalls coming across an ancient papyrus scroll in Egypt that dated to more than two thousand years before Christ, which became for him a mirror of modern times. “In it is the story of a man who confesses he doesn’t like his life anymore and has decided to kill himself. He says how beautiful it is to die with the smell of perfume as he lies under a veil on a ship on the Nile, liberated from his prison after his sickness. You have a text here that is very modern, especially if you think about the youth today who are in crisis, who don’t want to lie anymore. You realized there was always this feeling present.”

That dialogue must also spill over into conversations between believers and non-believers, Ravasi says. He evokes the “Courtyard of the Gentiles” in Jerusalem, a place where Christians shared their beliefs with those of other cultures and those searching for a faith. It is the model for dialogue groups he helped establish at the Sorbonne and UNESCO in Paris. “We did talks with diplomats but also with people who were in difficult situations and those who had simpler, more normal lives.”

And what about bringing women into greater dialogue with the official church? Ravasi was a little more circumspect on this point. He says, however, that he views Pope Francis’ recent synod on the family as the start of a new and deeper consultation with women “not only on questions that involve women, but our other major activities.”

Ravasi seems to have a listening ear. “There was always in theology the understanding that revelation was not reserved to the priest, the theologians,” he notes. “The duty belongs to the whole community – to the lay people, to the baptized. The Second Vatican Council said that the authorities have the duty to run the church, but so do the believers who belong to the community.”

Judith Valente, a regular contributor to NPR and "Religion and Ethics Newsweekly," is a journalist, poet and essayist. She is the author of Atchison Blue: A Search for Silence, a Spiritual Home and a Living Faith, named best spirituality book in paperback for 2014 by the Catholic Press Association and one of the three best spirituality books by Religion Newswriters Association. Her book, The Art of Pausing, was runner up for the Catholic Press Association book award in 2014.

Ms. Valente began her work as a staff reporter for The Washington Post. She later joined the staff of The Wall Street Journal, reporting from that paper's Chicago and London bureaus. She was twice a finalist for the Pulitzer Prize, first in the public service category as part of a team of reporters at The Dallas Times Herald in the 1980s. In 1993, she was a finalist for the Pulitzer in the feature writing category for her front page article in The Wall Street Journal chronicling the story of a religiously conservative father caring for his son dying of AIDS.

Giovanna Breu
Show Comments (
2
)
Comments are automatically closed two weeks after an article's initial publication. See our comments policy for more.
Gilberto Cavazos-G.
6 years 3 months ago
How sad that you could not bother to find out who the nameless participants are in the picture you chose for the article. They are Latino and Latina theologians. Including them in your article would have helped you engage culture as well. They are from left to right Neomi DeAnda, Carmen Nanko-Fernández, Roberto Goizueta, Orlando Espín, Jean-Pierre Ruiz, to the left of the Cardinal On his right are Marian Díaz, Miguel Díaz, María Teresa Davila, Michael Garanzini, S.J., Nestor Medina.
Tim Reidy
6 years 3 months ago

Thank you for providing this information. The caption has been updated.