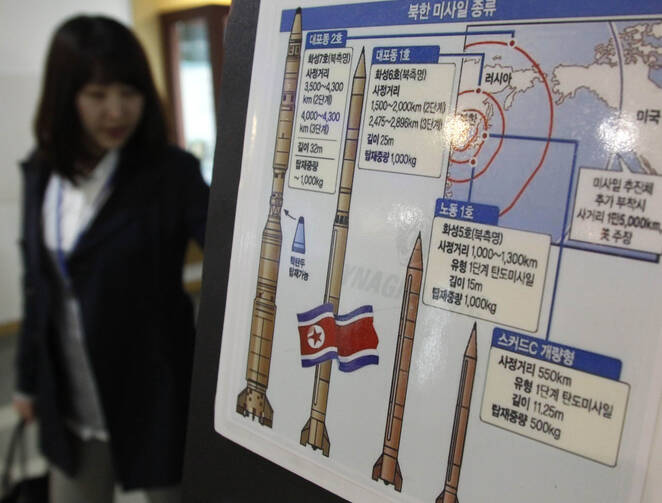 The Catholic Church seemed to throw its support behind what is, in Europe at least, an accelerating movement demanding the abolition of nuclear weapons during the first day of the Vienna Conference on the Humanitarian Impact of Nuclear Weapons on Dec. 8.

In a message to the conference participants from Pope Francis, read by Archbishop Silvano Tomasi, apostolic nuncio and permanent observer of the Holy See to the United Nations in Geneva, the pope said, “Nuclear deterrence and the threat of mutually assured destruction cannot be the basis for an ethics of fraternity and peaceful coexistence among peoples and states. The youth of today and tomorrow deserve far more…. Peace must be built on justice, socio-economic development, freedom, respect for fundamental human rights, the participation of all in public affairs and the building of trust between peoples.”

Pope Francis added, “I am convinced that the desire for peace and fraternity planted deep in the human heart will bear fruit in concrete ways to ensure that nuclear weapons are banned once and for all, to the benefit of our common home.”

Expanding on the pope’s statement later at a press conference, Archbishop Tomasi said, “The consistent position of the Vatican has been against atomic weapons. From the very beginning, from John XXIII in ‘Pacem in Terris’ onward, there has been a consistent line opposing the use, the possession, the development of nuclear weapons. During the ’80s, especially during the cold war, the use of deterrence was accepted as a condition for avoiding worst results, but not as a value in itself.”

But after the end of the cold war and in a multipolar world, Archbishop Tomasi later suggested that deterrence was no longer justifiable, explaining the risk of accident or the threat of terrorists acquiring fissile material have become too great. During the press conference, he said, “So we go back to the principal that the possession and use of atomic weapons is not at all acceptable.

A Vatican official explained that deterrence had been accepted only because of the crisis situation of the near past and only as it was treated as a step toward complete nuclear disarmament, but as decades passed since John Paul II had reluctantly acknowledged deterrence, that condition had not been met by global nuclear superpowers, at least fully. As other officials at the Vienna conference have pointed out, U.S. and Russian negotiations have led to substantially reduced stockpiles of nuclear warheads in recent years.

A document released at the conference, entitled “Nuclear Disarmament: Time for Abolition,” from the Permanent Mission of the Holy See to the United Nations and other international organizations in Geneva, called nuclear weapons a global problem shared not just by nuclear superpowers, but non-nuclear signatory states to the non-proliferation treaty, those who haven’t signed onto the treaty and by “unacknowledged possessing states” and states and allies under the “nuclear umbrella.”

“Now more than ever the facts of technological and political interdependence cry out for an ethic of solidarity in which we work with one another for a less dangerous, morally responsible global future.”

The document details failures of deterrence that might have led to nuclear war, including nuclear accidents, malfunctions and close calls. The Holy See statement calls for scrutiny of the belief that nuclear deterrence “is a stable basis for peace.” A Vatican official went so far as to describe political fealty to the strategic policy of deterrence as “religion” in its own right.

According to the Holy See statement, “The strategic nuclear situation has changed dramatically since the end of the Cold War. Rather than providing security…reliance on a strategy of nuclear deterrence has created a less secure world.” Instead, the Holy See argues, the current deterrence regime works “more as an incentive for countries to break out of the non-proliferation regime and develop nuclear arsenals of their own.” Just as bad, Vatican officials added, is the troubling misallocations of national resources which will persist under current nuclear weapons policies. The United States has recently announced plans to spend billions on the modernization of its nuclear force, resources, Vatican officials say, that would do far more common good if they were invested in resolving social inequities.

Kevin Clarke
@ClarkeAtAmericaclarke@americamedia.org
Show Comments (
1
)
Comments are automatically closed two weeks after an article's initial publication. See our comments policy for more.
Zach Egermayer
8 years 1 month ago
I do think that since the end of the Cold War, the threat of nuclear war has only gotten worse, with countries actually threatening. The reason being that major countries have tested the weapons and know they know the power of them. With technology advancing, countries are only going to make more powerful and larger weapons in case of a nuclear war. This just makes the world a scary place for the smaller countries that would get involved by just being allies of the larger, nuclear weapon holding countries. This would be one reason the church could support pacifism because too much war just leads to this situation.