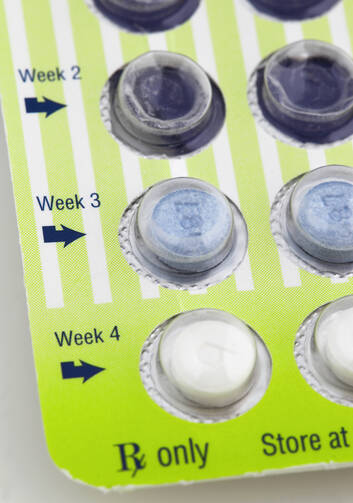 That is the argument being levied by a group of Catholic theologians against a report by other theologians who argue that the Catholic Church’s prohibition on artificial contraception is not rooted in Scripture or theology. That perspective was presented at a symposium on Sept. 20 about international aid held in conjunction with the meeting of the United Nations General Assembly.

In August, the U.K.-based Wijngaards Institute for Catholic Research published a report in anticipation of the 50th anniversary of the papal encyclical banning the use of contraception. The statement, signed by more than 150 Catholic scholars, argues, “The choice  to use contraceptives for either family planning or prophylactic purposes can be a responsible and ethical decision and even, at times, an ethical imperative.”

According to the group’s website, the full report was “made available to all U.N. departments and development agencies who are trying to navigate the relationship between religious belief and women’s health as they work towards the U.N. Sustainable Development Goals.”

The Catholic Church teaches that any sexual acts that are closed to pregnancy are morally illicit and bans the use of condoms, hormonal birth control pills and sterilization. On Tuesday, another group of Catholic theologians released their own statement in support of that teaching.

Their statement, signed by more than 500 scholars and presented at a press event at the Catholic University of America, says the Wijngaards statement “repeats the arguments that the Church has rejected and that numerous scholars have engaged and refuted since 1968.”

It says those pushing for the church to lift its ban on artificial contraception have failed to take into account findings from the past five decades that, they say, show contraception harms women and destabilizes relationships.

“Abundant studies show that contraception, such as hormonal contraceptives and intrauterine devices, can cause serious health problems for women,” the statement says.

“The widespread use of contraception,” it continues, “appears to have contributed greatly to the increase of sex outside of marriage, to an increase of unwed pregnancies, abortion, single parenthood, cohabitation, divorce, poverty, the exploitation of women, to declining marriage rates as well as to declining population growth in many parts of the world.”

Miriam Duignan, communications director for the Wijngaards Institute, rejected those claims and called access to contraception a social justice issue, especially for women in the developing world.

John S. Grabowski, an ethics professor at the Catholic University of America and a co-author of the statement supporting the church’s ban on contraception, told America that it is important for U.S. Catholics to know that there are many in the scholarly world who stand by the church’s teaching.

“People might stop and reconsider what we know now compared to 1968,” he said.

A 2012 Gallup Poll found that more than eight in 10 U.S. Catholics think using artificial birth control is moral. Another poll two years later by the Spanish-language television network Univision found large majorities of Catholics in countries in Latin America, Europe and the Philippines also approved the use of contraception. By contrast, fewer than half of those Catholics polled in Congo and Uganda said it was morally permissible.

The church, of course, is not a democracy, and the 1968 ban promulgated in Pope Paul VI’s “Humanae Vitae” and supported by subsequent popes still stands. Married couples who wish to delay pregnancy are encouraged by some Catholic groups to use Natural Family Planning, which tracks a woman’s fertility cycle to determine when she is least like to conceive.

Critics of the church’s ban on condoms and birth control pills contend that the intent of both artificial contraception and N.F.P. is the same, thus the ban does not make sense. But the Catholic University statement rebuffs this criticism.

“Couples using these methods make no attempt to thwart the power of acts that could result in the procreation of new human persons,” the statement says. “They respect God’s design for sexuality; they help individuals grow in self-mastery; they have the potential to strengthen marriages and respect the physical and psychological health of women.”

Duignan said the Wijngaards Institute made its report available during the U.N. symposium because some international aid agencies have expressed frustration to her group that faith-based organizations stymie efforts to make contraception available in the developing world. She said her organization wanted to show that not all Catholics are against contraception and indeed some see it as a social good.

“We’re really trying to help tackle the injustice for people who live in countries where the Catholic Church has the authority and power to impact healthcare,” she said.

She pointed to instances of women with many children living in extreme poverty who do not wish to get pregnant but either cannot afford contraception or do not have access to it, as well as couples where one partner is infected with H.I.V.

“It’s not just a theory or philosophical debate,” she said. “This is a life or death matter for people.”

Grabowski, on the other hand, said that he and his colleagues have heard a different story, one more in line with pronouncements from Pope Francis who has repeatedly condemned “ideological colonization,” which some interpret as criticism against international aid packages that include money earmarked for contraception. (The pope has also suggested, however, that there may be special cases in which couples have understandable reasons for wanting to limit family size.)

“What we’re hearing from people in the developing world is that they’re grateful that Catholic scholars are speaking out on issues like this because they’re dealing with contraception imperialism from the U.S. and other countries that link aid to contraception,” Grabowski said.