What Beau Biden Left Behind 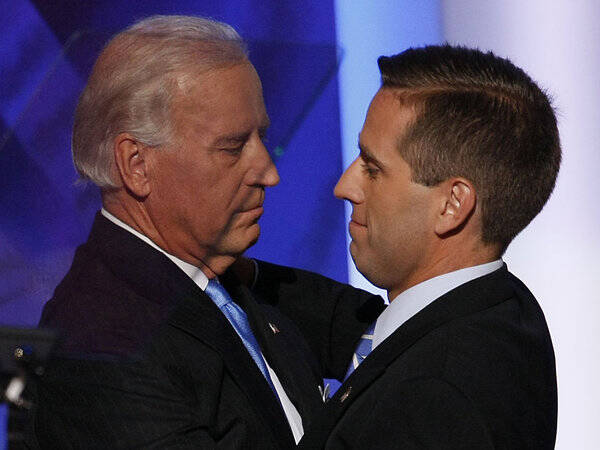 In our daily lives, we often find ourselves immune to the constant parade of images, voices and “opinions” which cumulatively make up the background “noise” of our existence. We become jaded from having to deal with the complexity as well as the enormity of things and situations and it gets to the point where little—if anything—surprises us anymore. That is, until something happens to bring us up short and snaps us out of our irrelevant reveries and self-delusions. Such was the case last Saturday, May 30th, when news broke of the death of the Vice President’s 46-year-old son from brain cancer.

It was later on that Saturday evening when the news suddenly broke that Beau Biden, Vice President Biden’s eldest son, had died from an aggressive recurrence of the brain cancer that he had originally (and had thought successfully) been treated for about two years ago. He was a political aspirant himself (as well as a military veteran), having been Attorney General of Delaware; he had declined to run for the Senate seat his father had held prior to assuming the Vice Presidency because of the onset of his illness. He had been the odds-on favorite to win the Democratic nomination for the Governorship of that state in the forthcoming 2016 election; it was a race he hoped to run. But in the reportage of his death, it wasn’t the political side of Beau Biden (born Joseph Rabinette Biden III) or even his medical condition that really was the focus of everyone’s attention—it was something else that captivated us; it was his humanity.

Given our secular news media, where the staples of daily coverage usually are the conflicts of whatever sort and the stories of celebrity comings and goings are de rigueur, the focus on Beau Biden as a person was a surprising—and welcome—thing. It was surprising to see the humanity of a person—and in this case, Beau Biden’s—become the focus of news coverage because it is usually not what the media wants to cover in the first place. The coverage that emphasized his humanity was welcome because it was it served as a reminder of what is really important—or what should really be important—to each and every one of us: the love and concern of friends and family.

What was striking was the fact that apart from the political and medical aspects of the story of Beau Biden’s life (which was fully recounted), the coverage pointed out how important the love of family was to Beau Biden, through all the 46 years of his life; and significantly to be reminded how poignantly that life began with tragedy. Over and over again, every news program replayed the film or showed the photograph of when the then young (30-year-old) and newly elected Democratic Senator from Delaware, Joseph R. Biden, stood solemnly inside a hospital room near the injured Beau’s bed (with Hunter nearby) while he took the oath of office.  The reason for that was the car accident that claimed the life of their mother Neilia and sister Naomi (who had been seated in the front seat while the two boys were in the back seat). It was in December 1972 when that happened; the family had been out shopping for a Christmas tree. The newly-elected Senator was busy preparing for his move to Washington, D.C. and the corridors of power. What would have been plans for a joyful Christmas celebration as well as a celebration of political success turned into a nightmare for the Biden family and severe test of faith and fortitude. And those films and photographs all showed a little boy bewildered by it all, looking up toward his father, some distance away. And in this way, was how Beau Biden’s life really began.

For Joseph Biden, the future was very bright and hopeful right up until that moment when all became dark after he was told what had happened. In the flick of a moment, his life was forever changed: his wife and daughter were gone and he was left wondering how to be a father to two motherless boys. He was sorely tempted to throw it all in, to give up altogether. (In fact, the pain would never entirely leave him; for years after the tragedy, his calendar for that day—December 18—would be purposely left blank as he would spend it in prayerful seclusion.) As he believed at the time, Delaware can get another senator, but his sons could not do without a father.

In the midst of his grief, he was prevented from giving up on a career of public service that he had worked so painstakingly hard to achieve—as well as and most importantly, life itself—thanks to the intervention of incumbent senators (themselves husbands and fathers and grandfathers) like Hubert Humphrey and Senate Majority Leader Mike Mansfield. Slowly, Joseph Biden accepted these new and difficult responsibilities and made his way back to the “land of the living.”  In time, he would marry a generous and loving woman named Jill who would become a generous and loving mother to his two sons (Beau and Hunter) and eventually present them with a sister—Ashley—to replace the one that was lost—and she would become “Mom” to them all. And Joseph Biden would make sure that no matter what, he always made it home every night to be with his family: as he often admitted, he needed his “boys more than they needed him.” All that and more would shape the future of the man who was a little boy in a hospital bed.

Beau Biden, as has been remarked, was physically a lot like his father—megawatt smile (and he even sounded like him, too), pleasant personality and vitally interested in the world around him. And, of course, politics and public service. But given the circumstances of his life’s beginning, he was also quieter, and more reflective. He could not be otherwise. What happened made him sensitive and more appreciative of life. He loved life and he loved his family. He loved his father profoundly as well as the woman who became “Mom” to him and his brother. He loved his brother and he loved his sister.  And in time, he loved his wife Hallie and his children: his son Hunter and his daughter Natalie. And he loved everyone in his extended family and his many friends and acquaintances. When he was handed this diagnosis of brain cancer, he soldiered on like the one he was. The cancer might have affected his brain, but it did not affect his heart. He continued to love and stayed loving, right to the end, with his entire family around him and with him.

The bond between father and son was profound; it had been remarked that whenever they saw each other, their eyes locked and each person focused totally on the other. All they had to do was look; all was understood and no words needed to be spoken. It was so Irish Catholic that way; feelings too deep to be expressed and even if words were employed in the communication, it would just be an inadequate attempt to express what was already known—there was no need to voice what would always be inexpressible.

When Beau Biden’s funeral Mass is held on Saturday, June 6th, at St. Anthony of Padua Church in Wilmington, Delaware, many people who knew him in this life will be present—and rightly so, for he touched many lives. He will be honored by the presence of the President of the United States, who will give the eulogy. But in the end, all the honors, tributes, and accolades—nice as they are—will not be the important thing, or what matters most.  A grieving father will be there, loving his son.

What matters most and what is the important thing, is that love existed, still exists. Love is present in joy and love is present in tragedy; but love can never be erased by death. As we are taught, life is not ended by death, “it is merely changed.” We may not understand it; we may not comprehend it, but we cannot be consumed by it, for love is stronger than death. The grieving father will still be here, loving his son, though the son will be gone. Life will continue, though not in the way we would want it. Things will change and we will be changed. But one thing will not change and one thing will not stop. Perhaps this is the lesson that Beau Biden left behind for all of us who live in the here and now; maybe this is the lesson that needs to penetrate the background “noise” of our lives and one that should remove from us all the irrelevant reveries and self-delusions: love endures.

Joseph McAuley
Show Comments (
1
)
Comments are automatically closed two weeks after an article's initial publication. See our comments policy for more.
Gef Flimlin
7 years 6 months ago
Beautifully written. The Prez could use that as a eulogy and be well respected for it.