The Trouble with 'The Testament of Mary' 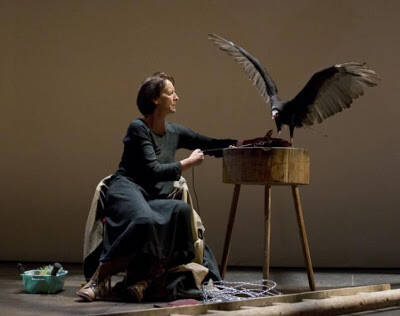 May is the month in which the church honors Mary; by happy coincidence, it is also the month when secular culture honors mothers. According to the Bible, Mary’s role in salvation history is small but mighty. Through the agency of the Holy Spirit, she conceives the Messiah, gives birth to Jesus and raises him to adulthood. She appears at a few key moments in Christ’s ministry—searching frantically for him and finding him teaching in the temple; urging him to assist the hapless hosts at Cana; and, finally, standing vigil beneath the cross. These brief glimpses into the hidden life of Mary suggest that she was an attentive mother, a bit pushy when she needed to be and faithful to her son in his darkest hour.

Admittedly, this isn’t much to go on. It seems that the woman given the title Mother of God might have warranted more space in the Scriptures. The Koran contains more mentions of Mary than the Bible—34 references, listing her genealogy and even depicting her childhood. Perhaps it is this relative lack of information about Mary in Christian tradition that has inspired so many artists over the centuries to fill in the gaps. It is the nature of human beings to try to imagine what they cannot know. Given this paucity of knowledge, painters and poets are free to depict Mary as they choose, so long as their images conform to the few established biblical “facts.” As a result, artists have had a field day with Mary. No woman has been represented more often in painting and sculpture, inspired more music or had more poems penned in an effort to express her unspoken heart.

A new, and highly unorthodox, depiction of Mary has been in the public eye of late, the Irish writer Colm Toíbín’s play “The Testament of Mary.” The one-woman play, first produced in Dublin, was recast as a novella, and has returned to the stage, newly revised for Broadway. The play received several Tony nominations this week, including one for Best Play, but the producers announced it would nonethless close on Sunday May 5.

I greeted the publication of the novella with enthusiasm and attended the play as soon as I could get a ticket. As a devotee of art and literature, I’ve enjoyed the many versions of Mary I have met on the walls of churches and museums and in the pages of books. Most of those incarnations, especially the more contemporary ones, have emphasized Mary’s humanity over her sanctity, dramatizing the ways in which she is like us ordinary mortals. In Henry Tanner’s arresting painting “The Annunciation,” for instance, we see Mary’s youth and vulnerability. There is fear in her eyes as she regards the intruding angel, shown as an explosion of light. In John Collier’s painting “Pietà,” Mary cradles her dead son, embracing him with both arms and legs in a posture reminiscent of childbirth. Her grief is harrowing. Such depictions of Mary bring her closer to us—and us closer to her. This is especially true for those of us who are mothers, who know what it is to conceive and give birth and fall in utter love with a child.

And here is where Colm Toíbín lost me. Much as I admire his writing, I could not countenance his Mary. It is not Mary’s unorthodoxy that troubles me. Toíbín is trying to deconstruct the images of the passive, bloodless Mary that dominated pietistic art of the 19th and 20th centuries; and I, along with most of his readers, welcome that corrective. What troubles me about his Mary is that she is a coward. After her son is nailed to the cross—a scene described in agonizing detail—Mary runs away. She runs away because she cannot help him, because she is afraid and (here is the hardest part to swallow) because she wants to save her own skin.

Toíbín sins here against Scripture and tradition, yes, but also against the more universal code of Motherlove—that irresistible compulsion that drives a mother to protect her child at any cost. Motherlove is the deep knowledge that you would stand between a killer and your child and take a bullet in the face, that you would dive in front of a runaway train to shove your child off the track, that you would part with your own heart if your child needed it and that you would do this gladly. The inventions of tradition and bad art have provided us with too many impossible Marys who bear no relation to us. Do we need another? Toíbín denies Mary what makes her most human, sinning at last against the law of verisimilitude, and giving us one more Mary we cannot believe in.

UPDATE: America contributor Rob Weinert-Kendt weighs in on the "The Testament of Mary" here.

Angela Alaimo O'Donnell
@aodonnellangela
Show Comments (
5
)
Comments are automatically closed two weeks after an article's initial publication. See our comments policy for more.
Bill Mazzella
9 years 2 months ago
It is an axiom that whatever we say, write or do says something about us. Despite our denials. We tend to deny parts of our life as if they do not count. Thus Sinatra said his music was his real self while Andrew Greeley used to say the same about his novels. Although each had very colorful lives outside the area they chose to be identified with. Toíbín grew up in Catholic Ireland, the holiest country in the church (at least till the pedophilia expose.) He prayed the rosary every night and heard his church solemnly condemn for his being gay. Toíbín not only goes after the hierarchy. He goes after Jesus and Mary. And the disciples. This guy is really mad. Joyce wasn't even this angry. Maybe it was those priests he found attractive that he could not have that fuels his anger and his disappointment.
Robert O'Connell
9 years 2 months ago
Mary is a sinless soul, even before the Incarnation: depicting her as a mother who would run away, because of fear -- and to save her own skin -- is the exact opposite of the true Mary. Sometimes folly is an impediment to real art.
Kevin McDermott
9 years 2 months ago
Did either of you actually read The Testament of Mary or see the play? It doesn't sound like it. Toibin is one of the great writers of our age. His conception of himself or his work is nothing like what you describe. Here is Mary Gordon on the book: http://www.nytimes.com/2012/11/11/books/review/the-testament-of-mary-by-colm-toibin.html Here's Toibin on the play: http://artsbeat.blogs.nytimes.com/2013/05/01/the-testament-of-toibin-a-tony-nod-and-a-closing-notice/
Bill Mazzella
9 years 1 month ago
Kevin, I read both of your articles but did not choose to merely refer irls rather than to state facts and ad hominems which is all your post has.
JR Cosgrove
9 years 1 month ago
Toibin's play/novella has been reviewed 3 times before on this site, the last time in January. Here is a comment on this work by me then

This is the third time this book has been reviewed by authors on America, all generally favorably in some aspects. Contrast these three articles with the review of the novella by a frequent commenter here at America. "What I was looking for in Testament was an emphasis on the humanity of Mary, the anger she must have felt at the death of Jesus, the annoyance and exasperation she may have felt toward the fawning disciples trying to understand what being His mother must have been like, lingering doubts of the enormity of who her Son was and what He was in her post- Ascension years; aspects of Mary that could possibly bring me closer to her in prayer. What I found in Testament was a contemptuous, nasty woman bearing the name of Mary, who ran at the crucifixion of Jesus (whose name is never once mentioned in the novella), who never believed in the mission of her Son while He was alive, and who dies believing the world was never worth redeeming. Jesus is pictured as a blowhard whose fame and self-importance get the better of Him. John (who is also never mentioned by name, referred only to as the 'guardian') is imagined as one who contorts and manipulates every word that comes out of Mary's mouth to invent his Gospel and writings. A dream Mary relates to her cousin after the crucifixion; that they and John stayed with Jesus until he died, and that Jesus rose zombie-like from the dead is what John turns into the Easter story. In other words, not only doesn't Mary believe the Resurrection ever happened, Testament's Mary KNOWS it was a figment of her imagination. AND it what seemed like a cheap stunt (or the cheapest stunt, given the context) is that Mary and her neighbor Farina no longer attend synagogue, but now worship Artemis at a pagan Temple (the author was careful to capitalize it). I would think modern Pagans would think this a cheap stunt as well. What struck me more than anything was that Testament's Mary is a complete stranger to me. Even when recounting the death of her Son, there is no sense of sorrow, no sense of love, no sense of motherhood. I saw no one I could relate to, and no one to whom I would WANT to relate, were I able to. There was no Love represented, either from Mary, the disciples, or her un-named Son in Testament. I am grateful it was as short as it was, or I'd have had to put it down. I was looking, straining to find some kind of faith, something that approached redemption. Nowhere to be found, unfortunately." http://americamagazine.org/content/all-things/considering-marys-humanity

This the fourth review, all somewhat favorable with some minor exceptions but from what I understand these remarks by a frequent commenter here are an accurate description of the work. Mary is a bitter old hag who worships at the pagan temple.and Jesus is her bumbling, mis-guided fool of a son who got taken in by some con men.