Lessons from a labor legend as T.P.P. debate continues

Lessons from a labor legend as T.P.P. debate continues 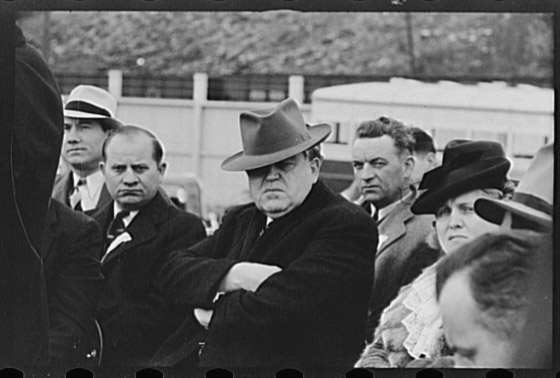 The Trans-Pacific Partnership, an international free-trade pact negotiated by the Obama administration, is an object of great controversy. The deal has even drawn the attention of bishops in the United States and Europe. In an unprecedented joint letter, they do not clearly endorse or reject the T.P.P., which will have an impact on the lives and livelihoods of over a billion workers and consumers if it is ratified, but they do outline areas of moral and practical concern. Offering a moral "toolbox" drawn from Catholic social teaching for the evaluation of the agreement, they share a firm conviction that free trade “can be truly beneficial and potentially contribute to a better future for all,” as long as it “promotes equitable access for all persons to the goods of this world and that it is structured in a way that helps to reduce inequality or injustice.”

Politicians on both the right—Republican Donald Trump—and the left—Democrat Bernie Sanders—have opposed T.P.P. ratification. Hillary Clinton, despite having negotiated this treaty as U.S. Secretary of State, is now opposed. What gives?

Unfortunately, our political leaders, even many people in the labor movement, may not remember John L. Lewis and how important he was in the movement for collective bargaining. Lewis was the longtime president of the United Mine Workers and later founder of the Congress of Industrial Organizations (which later merged with the American Federation of Labor). Saul Alinsky, the great Chicago community organizer (who set the mode for another community organizer, Barack Obama), was one of his admirers and wrote a biography of him in 1948.

Like Joe DiMaggio, John L. Lewis was a master of style and timing. I remember well seeing Lewis testifying before Congress in the 1950s on TV after school. When a senator who was questioning him said it was time to adjourn for the day, Lewis responded, “Mr. Senator, for working people in this country, it is still early in the working day. If you have business with me at this hour, let’s get it done.”

A Michigan judge once set a deadline after which he planned to send in the Michigan National Guard to evict auto workers during a sit-down strike at a General Motors plant in Flint, Mich., in 1937. The Democratic governor of Michigan, Frank Murphy, who later became attorney general and an associate justice of the United States, had originally deployed the Michigan National Guard to protect striking workers from harassment from local police and “Black Legion” guards hired by G.M.

Lewis took his time getting on the train from Washington to Detroit as the deadline drew near. As Lewis finally boarded, he calmly showed reporters information on the number of shares that the Michigan judge held in G.M. The order was called off, and the United Auto Workers soon won the right of collective bargaining. Once G.M. fell to union bargaining, the rest of the automobile producers fell in line, and the United Auto Workers grew rapidly.

Prior to Lewis, unions were based on specific trades (e.g., plumbers, electricians) and not related to specific industries. He led the U.M.W. during a time of major technological innovation in mining; Lewis knew that this would mean fewer workers employed in the mining industry. But he did not oppose the introduction of the new methods of production.

Forward looking and shrewd, Lewis bargained with coal mining operators to make payments to the union not based on the number of workers employed but on the tonnage of coal extracted with the new means of production. Lewis used these funds for retirement benefits, job training and education benefits for children of those employed in the mining industry (which includes yours truly; my family history is steeped in U.M.W. lore).

Sadly, our contemporary labor leaders have not had the forward-looking vision of John L. Lewis. They have just said no to T.P.P. and other free-trade deals. Rather than opposing them, perhaps these union leaders should follow his model and take advantage of the increased productivity that will be experienced by many industries entering into the global supply chain as opportunities for unions to bargain for greater education, retraining and pension benefits for the workforce in the affected industries.

The controversy over the T.P.P. recalls the debate over the North American Free Trade Agreement passed at the start of the Clinton administration. Nafta was negotiated by the George H.W. Bush administration, and during the 1992 campaign, Bill Clinton was lukewarm, if not in opposition, to its ratification. Once he became president, he knew that the country had no choice but to ratify this pact. Despite the opposition of many leading Democrats in Congress, including the late Senator Edward Kennedy and House Majority Leader Richard Gephardt, Nafta passed. If candidate Clinton is elected president, I suspect we will see a similar political about-face.

Now, likewise there is little-to-no reason for the U.S. Congress not to pass T.P.P. We already live in a world of low tariffs and low trade barriers, which have been enacted by Congress after bilateral negotiations. T.P.P. simply locks in place in the form of a treaty what is already in place because of various trade amendments over the past 20 years. The major beneficiaries of the T.P.P. will be countries who have not already signed on to existing trade agreements. But for the U.S. economy, little will change in terms of existing tariffs.

Similarly an Airbus plane sold in the United States is different from Airbus planes in Europe since they are assembled in the United States and make use of many U.S. components. Likewise Ford or Chrysler will make use of foreign components while manufacturing overseas. It is the same for all varieties of products. In Japan, for example, I went to a computer repair shop for a problem with a Sony notebook purchased in the New York. No luck: This was a very different product than the Sony notebooks sold in Japan.

The point is that the world economy has moved on to a global supply chain over the past three decades. This is the de-facto new structure of global production. A switch to high tariffs, as a consequence of repudiation of past trade deals, and a wave of protectionist legislation would have the effect of increasing the costs of production of manufacturing exports in the United States and lead to massive job losses, not job gains.

A devaluation of the exchange rate is similar to a tariff on imported goods: Both raise the price of the foreign goods for domestic buyers. Brazil went through the experience of contractionary, not expansionary, devaluations several decades ago. Brazil has for many decades enjoyed a major success in the export of buses, trucks and smaller airplanes throughout most of South America and Africa. After all, if these vehicles can survive roads and landing strips in Brazil, they are well road-tested for other countries. Once Brazil devalued its currency, however, the cost of importing components for its successful trucks, buses and planes increased dramatically, prices rose and Brazil lost significant market share.

We are not going to somehow go back to a 1950s structure of production in which everything is made within a domestic market start to finish. Our domestic production processes today are linked to a global supply chain. Such a system cannot be changed, even over several years or decades, without major costs for U.S. workers and consumers.

The United States and European bishops have raised concerns about the T.P.P., its environmental safeguards and about the pursuit of profits as the end-all and be-all of trade deals. But as we have seen in the Volkswagen scandal, companies that violate environmental standards are perhaps more accountable under a globalized trading system. The negative global publicity as well as the threat of sanctions and fines on Volkswagen as a result of a globalized trading system should tend to make producers more environmentally responsible, at least in the design of their products.

Our bishops are clearly right to call attention to the reckless pursuit of profits. In the United States, and even more so in Europe, economies are sliding into a new wave of crony capitalism that can lead to monopolistic profit-taking. It is an open secret that many firms spend more on their lobbying budget than on research and development. Tariffs, subsidies and import quotas in selected sectors (especially agriculture) have been carefully crafted for lawmakers by major political donors who are producing goods in the captive United States markets, thus safeguarding crony-capitalist profits.

U.S. cars in the 1950s were gas guzzlers, made to last only a few years. “New” cars would be unveiled before media each year with only minor changes from previous years’ models as a new innovation. Only after opening the U.S. market to competition from German and Japanese cars did U.S. car quality and longevity improve—and at lower car prices. Clearly promoting more intense international competition is one way to break up crony capitalism.

Show Comments (
4
)
Comments are automatically closed two weeks after an article's initial publication. See our comments policy for more.
William Rydberg
4 years 4 months ago
I'll just add a reference to Mr Senator Bernie Saunders of Vermont recent op-Ed in the New York Times. Also, I think that it's helpful to know that the greatest American Public Intellectual, Noam Chomsky has described Senator Saunders as having the views closest to that of a 1930s New Dealer, rather than a "socialist". Here is the link... http://www.nytimes.com/2016/06/29/opinion/campaign-stops/bernie-sanders-democrats-need-to-wake-up.html?action=click&contentCollection=Science&module=Trending&version=Full&region=Marginalia&pgtype=article&_r=0
Liam Richardson
4 years 4 months ago
Well, let's hope we're talking about the John L Lewis before 1940 - his conduct during that election and during World War II was more, shall we say, equivocal.
Stanley Kopacz
4 years 4 months ago
I don't know why an overarching world government type trade agreements are necessary. The fact that competition from Japanese cars occurred in a time of country-to-country trade agreements tells me a TPP is unnecessary. In my opinion, the TPP will just lead to unlimited growth and monopolization on a global level surpassing the influence of whole countries, even our own. Globalization is a red hot nuclear reactor now. The TPP may pull out all the carbon rods.
Rick Fueyo
4 years ago
The primary objections to TPP have to do with its overemphasis on intellectual property at the expense of all other US economic interests and the dispute resolution mechanisms. Those objections are sound, in my opinion. But I support the TPP on national security grounds. It is a more a security pact than a trade deal. It is intended to contain China by binding the rest of the Pacific to the US

1
Blessed Carlo Acutis is set to become the first millennial saint. This isn’t the first time the Catholic Church has canonized children.
Joanne M. Pierce
2
I started school at Steubenville as a conservative culture warrior—and came out the other side more Catholic
Elisha Valladares-Cormier
3
Pope Francis calls Trump’s family separation border policy ‘cruelty of the highest form’
J.D. Long-García
4
Talking to Jesus about voting, and listening for freedom rather than fear
Sam Sawyer, S.J.
5
President Trump tweeted about Archbishop Viganò. So, who is he?
Michael J. O’Loughlin