The test of Assisi III lies in the future

The test of Assisi III lies in the future

[BASILICA DI SAN FRANCESCO, ASSISI] As I write this, Pope Benedict has just left with heads of the delegations of different faiths back to Rome, where tomorrow he will greet them again in an audience in the Apostolic Palace.

I will be analysing today's event in detail in a forthcoming article for America. But for now, here are some fleeting thoughts.

The two-hour final ceremony involved a carefully crafted mix of short pledges to work together for peace; songs and dances by the Focolare movement's Gen Verde and Gen Rosso groups; and Franciscan friars releasing doves from the balcony above the piazza where the delegates were seated on three sides of a square dais.

It was fairly predictable; and in the words of one veteran Vatican journalist, "about as exciting as a glass of mineral water".

There was no prayer, in keeping with the changes introduced after the 1986 meeting. Instead, the delegates observed a time of silence "during which each person will be able to invoke the gift of peace or to express an earnest desire for it from deep within" -- a formula designed to include the four non-believers present.

Pope Benedict sat or stood flanked by Rabbi David Rosen of the Chief Rabbinate of Israel, the Ecumenical Patriarch Bartholomew I and Archbishop Rowan Williams, head of the Anglican Communion -- the most senior religious representatives at the gathering. 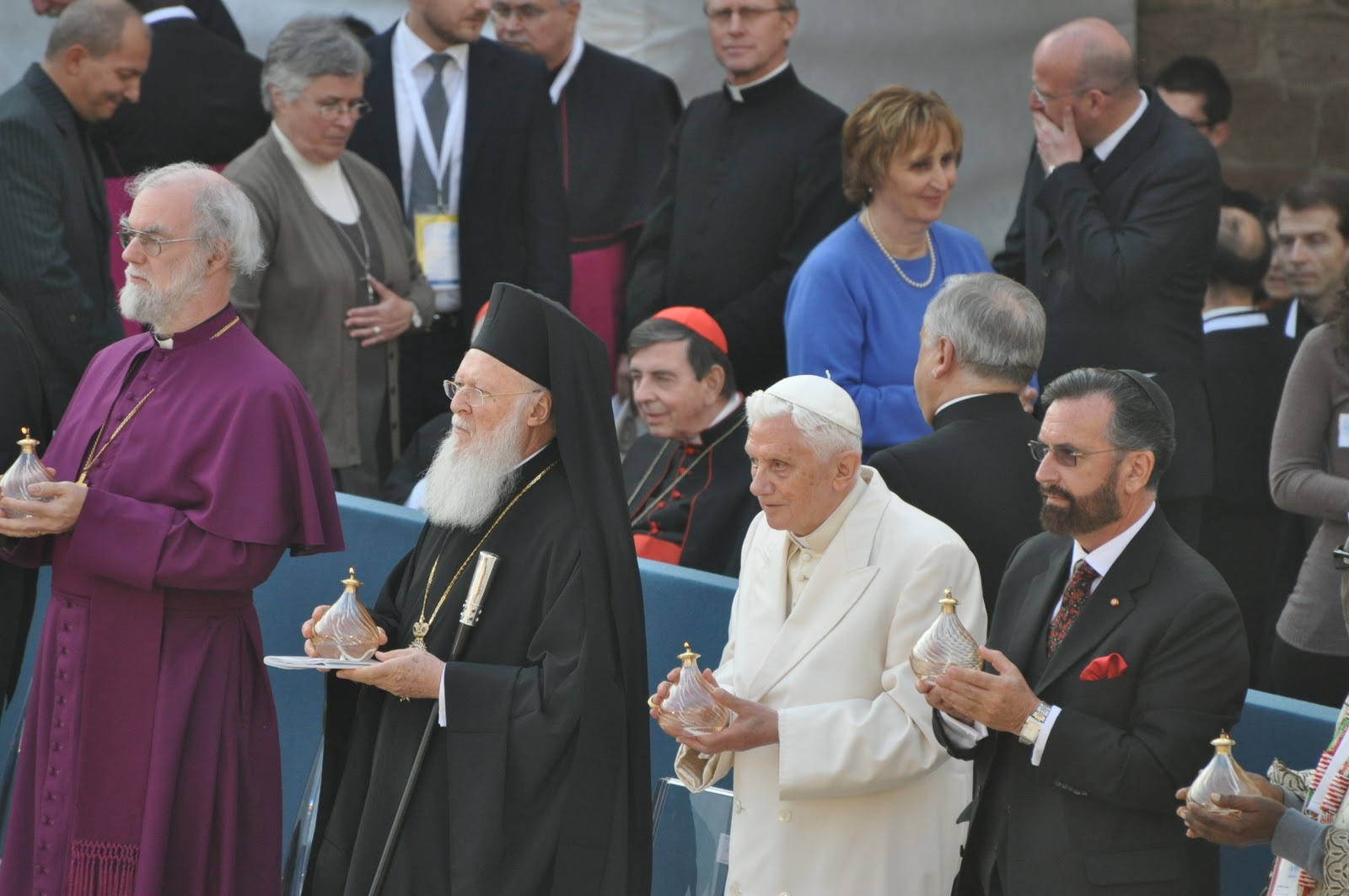 The other heads of delegations lacked such high status. Rather than a representative of the Al-Ahzar Institute in Cairo, for example  -- often spoken of as the Vatican of the Islamic world -- today's Islamic representatives were various Grand Muftis and academics.

Orthodox and Protestants were better represented: the World Council of Churches, the World Baptist Alliance, the World Methodist Federation and the Lutheran World Federation all had delegates, as did all the main Orthodox patriarchates.

But I failed to see any famous evangelicals, for example, in the list of delegates.

And this time there was no Dalai Lama. The Jain, Shinto, Taoist and Confucian delegates lacked name recognition.

That said, the line-up was impressive in its diversity, and the sight of all the faiths together on a platform in the shadow of the Basilica of St Francis created an unforgettable photo event.

As the Pope said in his concluding remarks, "Today's event is an image of how the spiritual dimension is a key element in the building of peace."

The inclusion of nonbelievers -- something that the Pope insisted on -- also gave today's event a different feel. Pope Benedict doubtless regards open-minded nonbelievers as more fruitful and necessary dialogue partners than some of the faiths present today.

A Mexican humanist, Prof Guillermo Hurtado, pledged to "make every effort to ensure that believers and non-believers in reciprocal trust can live out the shared quest for truth, justice and peace". Pope Benedict's struggle with western secularism aims to achieve just such an objective.

Today's gathering may not have broken much new ground, but it has done much to solidify relationships built up over 25 years of a common pursuit of a spiritual humanism of peace. And it sent important messages disassociating faith from violence and showing how different religions can unite in the cause of peace.

With the eurozone lurching into a dangerous crisis, and the Arab Spring turning to Winter, and new clouds of intolerance and nationalism appearing across an anxious world, the real fruit of Assisi III may be in the future -- when people of goodwill and peace need to band together to confront new forms of violence.

As Dr Rowan Williams put it this morning, "The challenges of our time are such that no one religious body can claim to have all the practical resources needed to confront them, even if we believe we have all we need in the spiritual or doctrinal realm".

That was the purpose of today: not theological dialogue or shared prayer, but the marshalling of a common platform to meet the challenges of tomorrow's world. In that sense, the judgement of its success lies in the future.

Good luck with the Italian.Once you get past the conjuagtion it is a doddle!
PJ Johnston
8 years 9 months ago
Thank you for this interesting, in-depth series on the Assisi gathering, Austen!
david power
8 years 9 months ago
These are just completely empty gestures.They have no substance.The Pope has about as much respect for most of these faiths as he does for the new series of X-Factor.The Jewish faith being the exception.
Sound and incense signifying nothing.Rowan Williams is a very intelligent and holy man but does not represent Anglicans in a meaningful way.
The Dalai Lama did not attend probably  because he knows the Pope is whispering sweet-nothings to the Chinese .
In the fog of time these events will not even be remembered.
They are staged.Noble intentions no doubt lead to the first one with the community of St Egidio always trying their best.But is the Church prophetic today?Does anybody think that the Pope puts peace above calculation?
Pope John captured the world's attention because they saw he was prepared to make massive gestures and to place the Church under the glaring light of the Gospel.His gestures were not fake or programmed which it seems all Rome is capable of today. The fact that the Pope took a train ride to Assisi is supposed to burnish his ecumenical credentials.
Look at the photos, the "tea and biscuit" brigade if ever you saw it. The air of Kumbaya has entered the Ivory Tower....
Michael Barberi
8 years 9 months ago
It is a good step in the right direction. Nevertheless, after 50 years, ecumenism has not been a success, but a disappointing failure. For example, after years of debate and negotiations, the Catholic Church issued a joint statement with the Anglican/Episcopal Church asserting that each Church takes into consideration the same factors when they formulate doctrine and teachings. However, when the Press started asking the CDF for clarification about differences in doctrine, the Catholic Church reiterated its long held believe that only the Catholic Church was the one true Chruch of Christ and itself solely contained the complete truth about salvation. The other Churches were less than perfect. Until we get past this type of arrogance, these meetings will be nothing more than friendly jestures, without remainder.
Advertisement