Food as a Power Tool 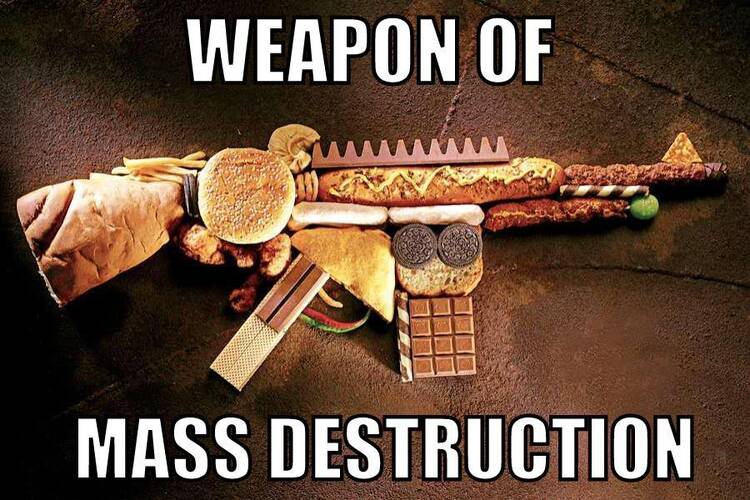 Back in the spring, I wrote a blog called “Some Food for Thought” (5/28). In it, I  wrote about how much food is actually wasted and how individuals as well as international organizations such as the UN are trying to arouse consciousness about the ever-growing situation concerning food production, food consumption and food waste and what individuals and organizations can do—and are doing—about it. In the blog, I pointed out the startling fact that 1.3 billion tons are wasted while one in nine people go hungry, which amounts to 900 million people (the kind of statistic that tends to increase rather than decrease). Seeing it in the newspaper at the time startled me, and the persistent thought of it prompted me to write some reflections concerning it. A similar reaction has prompted me again after I read a recent headline in USA Today.

It appeared in the August 10th edition of the paper and it simply glared at me: “Russia: Anger Erupts Over Destroyed Food—350 Tons of Banned Items From Europe, U.S.” At first blush, I read the words “Russia,” and “anger,” and “erupts.” My immediate thought was well, there’s nothing new here: history often recounts the all-to-prevalent episodes of anger and protests, which often led to conflicts and war. And then there’s the word “Russia.” No surprise there—Russian history is replete with anger, protests, conflict and war. The same with the word “destroyed”—people have been killed or died and destruction is the fruit of war and conflict. But when I came to the words “banned” and “food,” I stopped. How can this be that all these words were in the same sentence, coming to the conclusion it led to, that food—that most innocuous of substances—was used in a nefarious way as a tool for political machination and manipulation? And in Russia? And in this, the 21st century?

You would think that this was some kind of fantastical made-up account; that it is something out of the pages of some dusty history book. Or that it was some kind of literary fairy tale of sorts, with some kind of undisclosed meaning that only the holders of doctorates in literature could decipher. But it isn’t—it is a true story, an actual occurrence that is happening now. I continued on to read other articles concerning this development. Then I came across what was the best description of what was happening: as The Moscow Times describes it, it was the “terrifying…visceral...gleeful mass destruction” of food. Food was steamrolled, destroyed and incinerated on the orders of Russian President Vladimir Putin, who had signed a decree ordering banned foodstuffs from the United States and Europe be destroyed before it ever got onto store shelves or into the hands of hungry Russian people. No cheese or milk products, no fruits, no vegetables, no pork—no meat whatsoever. No peaches or nectarines, and certainly no tomatoes, all kinds of things people could actually eat—all gone. As Masha Gessen writes in The New Yorker, it was a “food slaughter.” Incomprehensible, but true—maddeningly true.

The Russian president had signed a decree basically outlawing the importation of foodstuffs from Europe and the United States, apparently in retaliation for the West’s stringent application of sanctions with regard to the Russian intervention/invasion in the affairs of Ukraine (which has been ongoing for some time now). The official position taken by the Russian government for the action of destroying and incinerating these foodstuffs was that it was a “health hazard” and not fit for human consumption; they averred that such actions were not “politically motivated.” To be presented with the visual evidence of such “food slaughter,” was too much for perceptive, proud—and sensitive—Russians to bear. To know that this was happening when there were Russians suffering from all kinds of hardships, including the want—and the need—of food was an occasion for incredulity and revulsion. Those feelings have led not only to protests, but also to petition drives to demand that such practices stop and that otherwise edible food be distributed to the poor and needy. (And whether these pleas and petitions will be heeded, is literally ultimately up to the “powers that be.”)

Food has become a geopolitical weapon. It is not a new concept, but it is a potent one. Food is as potent a weapon as any bomb or missile. When you come to think of it, it really shouldn’t be surprising that this is so. History is the story of food and famine, conflict and war (not entirely, of course, but alas, too often to count for comfort). Food has been used as a means of persuasion, coercion or behavior control.  An innocuous example could be found in the context of the family: a mother trying to coax her child into believing that if they eat the vegetables on the dinner plate, he or she will go up to be big and strong and smart. Or, if the child doesn’t eat those vegetables, he or she will lose out on dessert—the most common occurrence of the “carrot-and-stick” approach, trying to achieve a desired end (the consumption of vegetables) with the promise of a treat (be it dessert or a toy). That is something that we are all familiar with, food being used as an educational or a parental tool. But when food is used on a larger, societal and governmental level to affect public policy or to control the destiny or will of populations, that is something else entirely.

Quite possibly one of the many instances in history of the uses/abuses of food for political control is one of the most well-known and often recounted, the Irish Famine of the 1840’s (known also as “The Great Hunger” which was also the subject of a history by Cecil Woodham-Smith, written in 1962, with the same title) when the British and local authorities of the time looked the other way when the Irish were starving from the effects of the potato blight and yet allowed shipments of beef and grain to be exported, leaving a destitute and despairing people to face starvation or abandon their homeland by going to an exile of an uncertain destination and fate. And given the history of the Irish with starvation and political oppression, they are known as a people who are quick to come to the aid of any people who suffer from such conditions or circumstances, as evidenced by their charitable works and aid given to African charities in recent times.

Another glaring example of this would be North Korea, where food scarcity—and lack of transparency—is a way of life for the general population, but not for the elite. In North Korea, it is the members of the governing ruling party who rule for the good of themselves, but not for the good of their countrymen. But when it comes to the history of Russia, food and famine are also not unknown: you only have to see what happened in Russia before, during and after World War II—under Joseph Stalin—with his five-year plans, mass purges, show trials and executions and land redistributions. And all of that was seen in Ukraine, back then, too. So, even after several decades, food again becomes another “weapon of mass destruction”—again in Ukraine—in the quest for political power and control, regardless of any people’s act of protest or concern. All this has come to pass because of an elite’s (or most likely, one person’s) gluttony for the morsels of power, an appetite that can never be satiated or satisfied.

Ever since he was elected to the papacy two years ago, Pope Francis, through his words, speech, and actions has tried to show a better way for nations and peoples to achieve harmony and happiness, by pointing out the Gospel as a means for that harmony and happiness. To my knowledge he hasn’t directly said so or alluded to it, but given his proclivity for the poor and downtrodden (those who are at the “peripheries”) among us, he would surely condemn the use of food as a weapon—and a means—for political and societal control.

Pope Francis would surely direct us to the Gospel to make this point. He would have us read that passage where Jesus encounters the multitudes before Him who are hungry. The thousands of people who are present are not just physically hungry, but spiritually hungry, as well. And as we see, Jesus wants to alleviate both hungers. Everybody knows about the young boy with the two fish and the barley loaf and how the disciples plead with Jesus about what to do. We read that Jesus had everybody recline on the grass and taking the fish and that loaf of barley bread, he performs the miraculous in order that everyone may “have their fill.” Jesus saw their need and decided to do something about it. He did not want to perform this miracle just to show that He had the power—though He had it—He did it in order that the need that the people had—their hunger—would be satisfied and that that hunger would be no more. Jesus, in this instance, did not use food as a “weapon” or a means to show that he possessed power and control. He would use that food (and also the food He would later offer, Himself) as a gift to others, as a means to bring about harmony, happiness and reconciliation. He would never allow that gift of food (whether the heavenly one or in this instance, the earthly one) to be used in such a way other than the Father intended.

This is a lesson that is lost on temporal leaders, whether they live in the present, or inhabit the pages of history’s past. There are many crimes against humanity when it comes to power and control of the destiny of the human being. Guns can end a life and all kinds of bombs and missiles can evaporate populations. But to use food as a means to alter lives, whether indiscriminately, deliberately or though simple omission is unconscionable. And yet, it still happens. “Guns and butter” are both used as weapons. Not only is it an occasion of sin, it is an occasion of shame.