Some Food for Thought 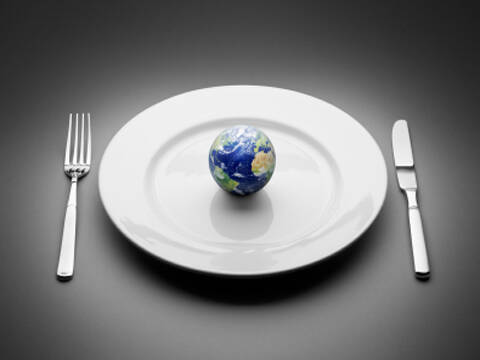 The next time you are about to throw out that half-eaten container of fast-food take-out, consider these facts: about one-third of the world’s food production and consumption  systems either gets lost or wasted—that comes to about 1.3 billion tons, the value of which comes to the astronomical sum of $1 trillion. And this in a world where one in every nine people go hungry: an estimated 900 million people. The food that is lost or wasted by industrialized nations alone (some 300 million tons) more or less equals the total net food production of Sub-Saharan Africa (230 million tons). It is indeed alarming to think that, according to the United Nations’ Environment Program, of all the food that is produced, only one in four calories are actually eaten. And yet, with all the food that is available, people go hungry. Why is that?

The answers (if there are “answers”) are as many as the stars in the sky. And yet, more and more people are becoming aware of this glaring disparity between supply and need. An international effort is being undertaken to raise awareness of the humanitarian, environmental and financial implications of the effects of food waste. The “sustainability of the food system” is the aim of many international organizations—particularly the United Nations—in combating one of the major crises (if not the crisis) of our time. The European Union, in particular, is advancing the goal of having member states embracing the task of working toward eliminating food waste by 50  by the year 2025. It is an audacious target, given that the EU proposal is concerned not only with the retail and distribution end of food production, but of personal, consumer use as well and that, within the European Union, the amount of food wasted annually comes to about 100 million tons—a figure that will surely go higher as time goes on if the issue is not met.

This is not to say that people in the world have suddenly discovered world hunger and its attendant problems, such as poverty, unemployment and homelessness. It has always been thus; as Jesus alluded to in the Gospels: “The poor you will always have with you; but you will not always have me.” (Mt 26:11, NAB—Jesus might not have specifically meant “hunger” when he said “poor,” but in a sense he talked about those who suffer in whatever way, including the hungry.) Yes, international organizations and other such groups are trying—and have tried—to address the problem of hunger in the world. And it is often a topic in the media, whether television or radio, newspapers or magazines. And to be sure, it has been mentioned in the pages of America, particularly in a current comment called “Good Food Gone Bad” (2/4/13). So, it’s not that it hasn’t been a topic of discussion, deliberation and debate. What’s notable now is that these concerns are starting to be acted upon on a wider scale.

In northwest Paris, Arash Derambarsh (a French-born citizen of Iranian heritage), a law student now a municipal councilor, had an epiphany when he saw the amount of food that was wasted by local supermarkets when there were hungry, poor, homeless and unemployed people who could have benefited from what was being discarded. He found it “scandalous and absurd” at what was going on. As he recounted to the British newspaper, The Guardian: “When I was a law student living on about €400 a month after I’d paid my rent, I used to have one proper meal a day around 5PM. I’d eat pasta, or potatoes, but it’s hard to study or work if you are hungry and always thinking about where the next meal will come from.” So he decided to do something about it: he persuaded the local supermarket to allow him to collect and distribute the unwanted food for the needy. Before long, his efforts were helping over 100 people in his locality. Realizing, as he said, that “food is the basis of life, it is an elementary factor in our existence,” he did not let his efforts to end there: he wanted to do more—he wanted this movement of his to be a national and in time, world-wide one.

Within four months, Mr. Derambarsh circulated a petition requesting that French supermarkets donate unwanted food to charity. That plea—and those petitions—garnered over 200,000 signatures. And that, in turn, spurred Guillaume Garot, a former French food minister, to submit a bill to the National Assembly (or French parliament). The bill, which called for the banning the practice of discarding otherwise edible food, was passed unanimously. As Mr. Garot stated: “It’s scandalous to see bleach being poured into supermarket dustbins [dumpsters] along with edible foods.”  Under this new law—as of July 2016—supermarkets that are 4,300 feet or larger will face fines up towards $82,000 for noncompliance and proprietors also face a possible 2 year prison sentence if they fail to enter into contracts doing so. This bill comes on the heels of a governmental regulation in 2013 authorizing more accurate “sell-by” or termination-date labels on food packaging, correcting what has been seen to be overly-conservative expiration dates (which is another element in the food disposal problem). In Britain, for example, the government prefers the voluntary approach to the situation: agreements are made with the retail sector concerning food waste, but without mandatory targets. It shows that there are many—and varied—views and “solutions” to a complex and growing problem. As previously mentioned, world organizations and governments, like the United Nations and the member states of the European Union, are heeding this call by promoting awareness and providing guidelines to follow, such as the “Eat. Think. Save.” campaign of the Save Food Initiative and the UN Secretary-General’s “Zero Hunger Challenge” among other movements.

It is something that we here in the United States could learn from. In the United States alone, about 40 pecent of food is wasted annually, at a cost of $160 billion. More food is thrown out than all the plastic, paper, metal and glass we discard. To put it another way: the amount of food wasted comes to about 20 pounds per person per month (according to a UN study). Food waste is the second most common component found in our landfills and the methane gas that escapes from that waste is a potentially major health hazard (if not already) to our environment. As a report in the Washington Post notes, the Environmental Protection Agency reported that in 2012 Americans threw out 35 million tons, which was 20 percent more than in the year 2000, and 50% more than 1990. And in 1960, Americans threw out just 12.2 million tons. In France—that gastronomic food haven—the amount of food wasted comes to 67 percent. And in Britain, 7 tons get tossed away, enough to fill London’s Wembley Stadium 9 times over.

All of this is enough to make one reach for the Tums or the Roll-Aids or to lose what you’ve just already eaten, if you stop to really think about the scale and the seriousness of the matter. It can be overwhelming. But it is something that cannot be pushed aside, ignored, wished away or shoved off to the nearest landfill. Such a situation is something that a consumerist society must come to terms with—however it does so—because we are all affected by it, one way or another, whether it is a government official in high office reading folders of documents or the ordinary consumer waiting at a store counter, trying to buy something for a meal at the end of the day or the poor person in the street holding a sign, begging for help and hope. Even Pope Francis, in a video presentation opening the 2015 Milan Expo (which runs from May 1st through October 31st and whose themes are sustainable development and feeding the poor) succinctly put it: while we have “this paradox of abundance,” we obey “the culture of waste.”

There are no easy solutions for these many difficult questions. Mindsets are hard to change, but concerned hearts can work wonders. Individuals like Arash Derambarsh are proof of that and groups like our own Meals-on-Wheels can offer help and assistance when all seems lost. And there are also organizations like Catholic Charities and the ecumenical non-profits like the Society of St. Andrew are out there helping, too. Not far from America’s offices in midtown Manhattan, unsold food is daily discarded by supermarkets within sight of those who beg for such sustenance. So much is spent on the food chain and paradoxically, $1 billion alone is spent just to dispose of food waste here in the United States. A consumerist society would do well do digest such sobering statistics; our world needs to leave a better “foodprint” than that. This anomaly is something that ought to be literally—and figuratively—“cleaned off our plates.”