Responses to Synod 2014: A Journey of Accompaniment 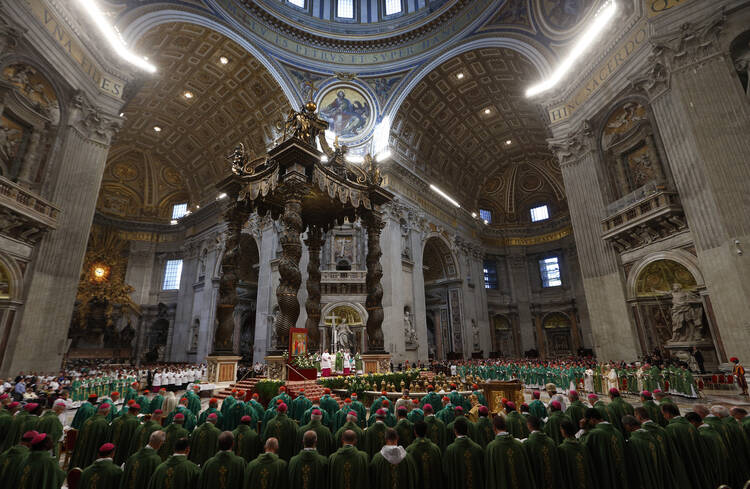 Pope Francis’ first public word to the cardinals who elected him was “movement.” In a homily delivered in the Sistine Chapel the day after his election, he preached that the church must move by journeying, building and professing Jesus Christ crucified. “When we stop moving,” he said, “things go wrong.” He concluded with one of his favorite Italian words, “Avanti.” The church must “go forward.”

The pope’s words came to mind over the past two weeks of the recently concluded Extraordinary Synod of Bishops. A synod is literally a walking or journeying together (syn) along the way (hodos). It would be an understatement to describe that common journey to-date as dramatic, even turbulent. Some have seen it as scandalous, others as liberating. One hopes that the ongoing journey will be animated by ever-greater freedom, respect and transparency.

Perhaps most important, one hopes that the upcoming Ordinary Synod—and the entire church—will discern more fully the implications of a pastoral approach that the pope has described as “accompaniment.” During World Youth Day 2013, he issued a challenge to the Brazilian bishops. Reflecting on Jesus’s post-Resurrection journey to Emmaus, Francis said:

“[W]e need a church capable of walking at people’s side, of doing more than simply listening to them; a church that accompanies them on their journey; a church able to make sense of the ‘night’ contained in the flight of so many of our brothers and sisters from Jerusalem; a church that realizes that the reasons why people leave also contain reasons why they can eventually return. But we need to know how to interpret, with courage, the larger picture. Jesus warmed the hearts of the disciples of Emmaus.”

In words of great importance for the coming months, he continued, “[I]t is important to devise and ensure a suitable formation, one which will provide persons able to step into the night without being overcome by the darkness and losing their bearings; able to listen to people’s dreams without being seduced and to share their disappointments without losing hope and becoming bitter; able to sympathize with the brokenness of others without losing their own strength and identity.”

It is Jesus Christ who enables and embodies this logic of Emmaus: he walks alongside the disciples, he listens and he teaches, and, ultimately, he gives them his very body. The Letter to the Hebrews deepens this logic of accompaniment. Jesus is concerned not with angels but with “the descendants of Abraham” who are held captive by fear of death (Heb 2:15-16). The Letter’s anonymous author continues: “Therefore he had to be made like his brethren in every respect, so that he might become a merciful and faithful high priest in the service of God” (2:17). Sinless, he is tempted in every way without succumbing. He bears—in an unequaled manner—the full burden of sin and death. It is no accident that Hebrews 4:14-16, 5:7-9 is the second reading of the Roman Catholic Good Friday liturgy.

And, yet, Jesus is not overcome by the ‘night’ of darkness, doubt, sin and death. He conquered them “once for all when he offered up himself” (7:27). He is both victim and priest. Vulnerability and strength go together. Accompaniment need not entail accommodation, nor truth intolerance. We cannot collapse this Christic tension, however demanding and discomfiting it may be.

I have been changed, for instance, by my friendships with gay men and women. I have come to see the wounds that many gay men and women carry: estrangement, self-hatred, isolation, the emotional and physical exhaustion of wearing—day after day—a public mask that conceals inner reality. I have seen witnesses of self-sacrificing love. That accompaniment, at the same time, has convinced me more deeply of the life-giving truth of the church’s sexual teaching for all people; the narrow way of Jesus leads each of us, not without trials and failures, into broad spaces of peace, self-acceptance, self-control and lasting joy. I admire the honest, courageous reflection on homosexuality offered by such writers as Joshua Gonnerman and Eve Tushnet. The way forward is found, paradoxically, in “the faith which was once for all delivered to the saints” (Jude 3).

I hope that the church, as it walks together over the coming year, will have the courage to enter more deeply into the joys and sorrows of families and to move forward into the merciful truth of the one who is the “same yesterday and today and forever” (Heb 13:8). True accompaniment recognizes that the journey’s purpose is to reach the destination, that gradualism has a goal: the fulfillment of the Law, the perfection of charity. The sign of faith, as Joseph Ratzinger said in a homily on the occasion of Pope Paul VI’s death, is “not a fist, but an open hand.” Christ, whether at Emmaus or in our lives right now, takes us by the hand in friendship and leads us patiently and surely. In him, there can be no opposition between accompaniment and orthodoxy, between truth and mercy. He loves us enough to walk alongside us in our darkness and discouragement, and he loves us enough to lead us onward into the truth which alone sets us free.

Christopher Ruddy is associate professor of historical and systematic theology at The Catholic University of America in Washington, D.C.