Can we integrate our schools without integrating our neighborhoods? 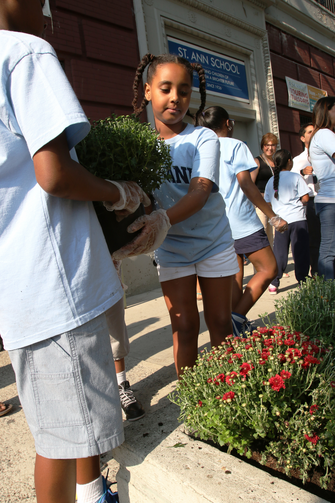 In “Our Segregated Schools”America’s editors seems to announce a shift in their views regarding an important social issue. The editors point to data linking academic performance, particularly graduation rates, to the amount of racial integration in schools. They cite statistics to indicate that these benefits accrue more frequently to minority students who attend majority-white schools. “Starting in the late 1960s, court-mandated desegregation efforts began to chip away at the achievement gap between white and black students, cutting it in half in just 17 years. Black students who attended integrated schools graduated from high school and college at higher rates and would go on to earn 25 percent more than peers who attended racially isolated schools…A report in 2012 found that 74 percent of black students and 80 percent of Latino students attend schools where the majority of students are not white, schools where course offerings are slim, teachers are inexperienced and most students qualify for free lunch.”

The editorial asserts, “Segregation in schools cannot be understood or addressed without also tackling segregation in housing and concentrated poverty.” After acknowledging that legally-enforced busing to achieve school integration was largely a political and economic failure, and not likely to be restored, the question is raised, “What if more families crossed the lines of color and economic status in the belief that their children can be richer for their encounter with the other? What if parents with options looked beyond high test scores and demanded the classroom diversity that studies show equips students to succeed in college and beyond?”

Sounds simple enough. No government action needed, just decisions by individual families. But in most public elementary schools, home address determines school assignment. To change the racial composition of a school, one must change the racial composition of the neighborhood. But at various points in the magazine’s history, the editors and other writers have highlighted various problems related to gentrification. (See this editorial from 2003, and these columns from 2004 and 2006.) If there is some way to achieve the editors’ recommended racial mix without producing the adverse effects of gentrification, they do not reveal it. Are the editors now proposing that the scholastic benefits of gentrification outweigh the social negatives? Does gentrification now promote the common good? More explanation is needed.

The editors conclude the current piece, “This fall, millions of children already disadvantaged by the burdens of poverty will return to failing schools. Only when the fate of black and brown and white students is intertwined can our country go beyond interminable reform battles and move on to build an education system that our children deserve and our democracy demands.”

Perhaps there is some optimal racial mix that boosts student success for all, though I am a bit skeptical about that, having not seen the studies. The editors do acknowledge that there are, in some of the nation’s lowest-income urban areas, Catholic elementary schools where the students are growing, learning, thriving, and earning admission to a variety of great high schools. In Philadelphia, some of these schools are independent Catholic schools, operating under a novel system approved several years ago by Archbishop Charles Chaput, with strong financial support from local and regional businesses, foundations and individuals within and beyond the city limits. The new system had its origins when members of a suburban parish helped an inner-city pastor put a new roof on his century-old parish school, which was nearly insolvent. A group of business leaders worked with the pastor, and with diocesan officials, to create a new model for financing Catholic schools in some of the city’s most desperate areas. In some schools, few of the students are Catholic, and few or none of the students are white. Each child has a parent or guardian willing to make a significant economic sacrifice to pay tuition based on income. They value education, love their children dearly, and are willing to encourage, prod, and support the child in doing his or her best work.

All of us see the terrible cost of failing schools. Fixing the poor performance of public schools, such as Michael Brown’s Normandy High School, should be a priority demand of every community in which such failures exist. Voters do have power to insist on change that can be accomplished at the local and state level. Some public school budgets already provide more money per student than private schools in the same area.

Michael Brown’s mother saw the importance of academic achievement. Is it possible that schools might improve, and neighborhoods thrive, if more mothers saw that connection and demanded more from teachers, administrators and their own sons? Community organizers might help inform and guide such efforts, just as they helped workers organize for their rights in earlier decades. The fastest way to meet the educational emergency is to issue vouchers, which give the parent of every child an opportunity to use economic clout to improve schools—the best schools would expand, the worst would disappear. The competition for students would promote best practices, including appropriate offerings for children with special needs.

Whether or not integration boosts performance, we need not wait for it to happen, nor open a new discussion about gentrification. After all, black lives matter.

Joseph J. Dunn is a retired business executive. He writes frequently on issues of economic justice.

Joseph J. Dunn
Show Comments (
1
)
Comments are automatically closed two weeks after an article's initial publication. See our comments policy for more.
Chuck Kotlarz
5 years 9 months ago
Without a chance at a fruitful life, how meaningful is education? Through 2061, total US inheritance is projected near $60 trillion. Peasant status is virtually assured for non heirs starting $60 trillion in the hole. A cut from a 70% to a 50% top federal income tax rate in 1982 began the billionaire bubble. The number of US billionaires more than quadrupled by 1988 while crippling median income growth. Median income today is nearly the same as in 1982. The birth of a great nation began with the words, "all men are created equal”; the inequality of a $60 trillion inheritance perhaps will mark a great nation's demise.