The Philosopher Who Defied Hitler: Q&A with Alice von Hildebrand

The Philosopher Who Defied Hitler: Q&A with Alice von Hildebrand 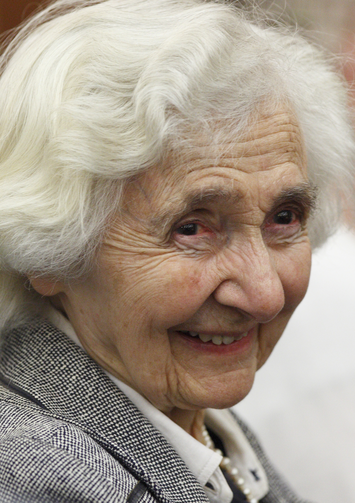 Alice von Hildebrand is a Belgian-born Catholic philosopher who retired from the classroom in 1984 after teaching at Hunter College in New York City for 37 years. In September 2013, Pope Francis awarded her a Dame Grand Cross of the Pontifical Order of St. Gregory the Great on the occasion of her 90th birthday.

As a graduate student at Fordham University in the 1940s, Lady Alice studied under the German personalist philosopher Dietrich von Hildebrand, a widower she subsequently married despite being 34 years his junior. Before her husband died in 1977, she persuaded him to write an autobiographical account of his life. This memoir includes the story of his persecution under the Nazis, who had blacklisted him in 1921 and eventually forced him to flee Europe for the United States during World War II. A portion of the manuscript, newly compiled and translated into English by John Henry Crosby under the title “My Battle Against Hitler: Faith, Truth, and Defiance in the Shadow of the Third Reich," was published Oct. 21 by Image Books.

On Oct. 21, I conducted the following email interview with Lady Alice on her career and on the newly translated autobiography of her husband.

How did you convince your husband to write this book before he died?

I was grieved by the fact that because my husband was much older than I was, there were many years of his life that I could not possibly have shared with him. When I told him this one day, he said without hesitating, “Then I will write my life for you.”

He began writing the next day, beginning with his life from the age of three and continuing until 1937. Just as he was writing about this crucial year in his fight against Nazism, he became so concerned about what was happening in the wake of Vatican II that he interrupted this fascinating and amazing biography of 5,000 handwritten pages. This is how he wrote his memoirs, a portion of which is now published in My Battle against Hitler.

What do you hope English-speaking readers will take away from the book?

I think any astute reader of My Battle against Hitler will understand the message of this book, namely that the devil never sleeps. It would be a huge mistake to assume that the horrors which took place in both Germany and Soviet Russia could never happen to us. By allowing ourselves to fall into spiritual and intellectual somnolence, by becoming consumed with the pursuit of money and pleasure, we forget that the relativism rampant in our schools and universities can again pave the way for such abominable horrors. We should always be aware of the dangers surrounding us, and through prayer and the sacraments remain spiritually alert.

If you could tell people one thing about your late husband Dietrich, what would it be?

Coming from a very Catholic background, I had met many deeply committed Catholics in my life—priests, nuns and lay people (my father being one of them)—but I had never met one who out of love for God, and love for truth and justice, gave up everything in order to fight evil. For the first time in my life, I met a hero. He was not someone who by nature was “macho”: he hated fights, dissensions, etc. But when the call came, he never hesitated.

Remarkably, he did not experience fear when he knew his life was threatened daily. I am ever moved when I read the passage in his memoirs after he is warned by the chief of the secret police in Vienna that an assassination order had gone out for him. My husband writes, “Though I am fearful of physical dangers, I was not afraid; I was not intimidated by what he had told me. I had the consciousness that I was conducting a struggle willed by God, and this gave me an incredible inner freedom.”

He never lamented all that he had lost, unlike so many other refugees. He went from a mansion in Munich to the slums of New York. Like St. Paul, he could live in riches and in utter poverty. This made such a deep impression upon me that a seed was planted in my heart that played a profound role in awakening my love for him. When I first met him, my overwhelming feeling was awe.

He was called upon to play the role of Cassandra, and so he soon discovered that people hate bad news. Just as they are leading their daily lives, working and trying to "succeed," here comes someone who warns them that they should arm themselves for a deadly fight. I am convinced that today his message would be very much the same.

You and your husband met at Fordham University when you were a graduate student and he was your professor. What made you fall in love with him?

One falls in love with someone when one is granted the privilege of seeing the beauty that God placed in them at the moment of their creation. I call it the "Tabor vision.” This vision touches one's heart, and we must always seek to keep it alive, for it is the seal of "faithfulness." I was granted this "Tabor vision" of Dietrich von Hildebrand, and it gives a key to our marriage.

You were both Catholic intellectuals, but with different philosophical perspectives. What was your marriage like?

Neither Dietrich von Hildebrand nor I ever claimed to be theologians—even though he is often called one. Through him I fell in love with "the love of wisdom" and devoted my life to increasing and deepening my knowledge, and then sharing it with thousands of students at Hunter College in the City University of New York. Teaching taught me that souls are starving for truth and mostly deprived of it. I also learned that when truth is freely offered to them many find their way to God. The great enemy of truth is relativism in all its forms, falsely presented as "democracy," as anti-totalitarianism, as rolling back a supposed dark ages. In fact, to embrace relativism is to return to the dark cave from which Plato's philosopher escaped, while to embrace the existence of truth, even when it means the risk of attacks and persecution, is to reenter the cave in order to liberate those who remain trapped in the realm of shadows. Truth is never “mine;” it is always “ours.” Truth unites, while error divides.

The deep bond between my husband and I was our common love for the one true Church, for truth, for beauty and moral goodness. We loved anything with a genuine spiritual and cultural sursum corda:  great classical music, great paintings, great architecture and great literature. My husband had a special talent for showing that visible and audible beauty clearly hint at God, who is Beauty itself. We shared the same love for saints and had the same friends. We shared everything important.

What did it mean for you to be named a Grand Dame of the Order of St. Gregory by Pope Francis last year?

I was joyfully conscious when I became Lady Alice that my husband—now in eternity—was the true recipient.

Some people consider you a Christian feminist. How do you understand feminism?

To distinguish myself clearly from Simone de Beauvoir's powerful and poisonous book, The Second Sex, I would not call myself a Christian feminist but a champion of femininity. The sublime beauty of the female mission as virgin, wife or mother has been so degraded that I felt a calling to shed light on "the privilege of being a woman," which is also the title of one of my books.

Of all creatures mentioned in Genesis, Eve is the only one whose body is taken from the body of a person; even Adam's body was taken from the "slime of the earth." She is declared by Adam to be the “mother of the living.” He is not called the “father of the living." When Eve gives birth to Cain, she ecstatically says: I have brought a child into the world with God's help. Adam, the biological father, is not mentioned. Eve proclaims that the child's soul—which is made to God's image and likeness—is placed by God himself into her body. God, so to speak, "touches" the female body and in so doing gives it a note of sacredness.

The duel which takes place between the Woman and the Serpent, not between "the strong sex” and the Serpent, hints at the crucial role of women in the economy of redemption. The most perfect of all creatures, queen of the Angels, is a woman—not a man. It is high time that women should humbly acknowledge that they are privileged to be women.

What do you hope people will take away from your life and career?

My career, which took place in a deeply antagonistic milieu, taught me that “with God all things are possible" (Matt 9:26) and that “I can do all things in him who strengthens me” (Phil 4:13).

What’s your favorite scripture verse and why?

“Unless you become like little children, you shall not enter the kingdom of heaven” (Matt 18:3). How important it is to meditate on these divine words, particularly in universities where "aristocratic stupidities" (i.e. intellectual errors) are so often greeted with respect.

I would greet Pope Francis as the successor of St. Peter, who, like Francis today, was the first to receive the sublime mission of transmitting the divine message—without changing one iota. The Holy Catholic Church has always lived up to this great mission, to hold fast to the golden cord of tradition that stretches all the way back to Christ Himself.

Do you have any final thoughts or hopes for the future?

The future is in God's hands. One cannot err by meditating on the New Testament, where both St. Matthew and St. Luke warn us that, at the end of time—and inevitably we are coming closer—there will be such confusion as to mislead even the elect.

Watch and pray, lest you fall into temptation. May God grant us the gifts of faith and hope at moments when humanly speaking we have reason to be threatened by despair. "These things I have spoken to you, that in me you may have peace. In the world you shall have distress: but have confidence, I have overcome the world” (Jn 16:33).