Student activists are attempting to shatter the “post-racial” illusion many believe exists. 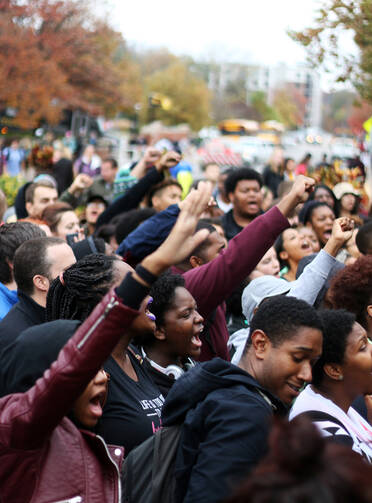 On Oct. 10, a group of African-American students at The University of Missouri interrupted the school’s homecoming parade. Armed with megaphones and wearing shirts that read “1839 Was Built on My B(l)ack,” the protestors stood in front of president Tim Wolfe’s car and, one by one, described racism they’d each experienced at Mizzou. Protestors shouted angrily, “We will not continue to be called n*****s on this campus!”

On Nov. 6, Wolfe released a public statement in which he, among other things, acknowledged that racism was indeed an issue at Mizzou. Three days later, he resigned.

The events at Mizzou have sparked schools across the country, many that are also dealing with their own racially charged incidents, including Howard State, where anonymous death threats were sent to black students, and Yale University, where an alleged “white girls only” sign hung outside a fraternity. Students across the country have staged sit-ins and marches, demanding U.S. schools acknowledge that racism is an issue.

However, many wonder will these student-led demonstrations will accomplish.

April Kelly-Woessner, a professor at Elizabethtown College in Pennsylvania, argues that a certain level of intolerance exists on college campuses due to “speech codes, civility codes, and broad, sweeping policies on harassment and discrimination.” She adds that student-led protests often exacerbate this problem.

The Atlantic’s Conor Friedersdorf, who has written on another Yale incident, has also critiqued what many are calling the “intolerance of student activists.” He described Christakis’ email on culture appropriation as “a model of relevant, thoughtful, civil engagement.” He then goes on to wonder why “so many cognitively privileged, ordinarily kind, seemingly well-intentioned young people could lash out with such flagrant intolerance.”

As an undergraduate, I was often the only person of color in many of my classes. I’d often hear microaggressions—“you speak so well for a Dominican!”—from classmates who may or may not have known better. Outside of my circle of friends, I was never comfortable discussing these moments.

William Quan, a Chinese-American who also graduated Fordham College in 2011, sat down to talk with me. He recounts a moment freshmen year when a white student shouted a racial slur at him. “Yes, it definitely bothered me at the time, this was a person I barely knew,” says Quan. When asked if he had brought up the moment with any professor or administrative staff, he responds, “No. I don’t think they would have done anything, really.”

An African-American football player, who discussed his experiences with me via email and who has asked to remain anonymous, recounts how difficult it was for him to move from his hometown to a school in New England. “Aside from my teammates, many of them also black, there was no one I really felt comfortable talking to, I’d even avoid going out because people would just stare at me,” he adds.

Za’Khari Waddy, a 14-year-old at Tabb Middle School in Yorktown, Va., has also been the victim of racism. According to his mother, Zettrona Powell, the 14-year-old has had racial slurs shouted at him by classmates and has even been asked if he was going to “rape or rob a young lady.”

Aaron Lewis, a senior at Yale University, refutes the idea that minority students are “whining.” Speaking on the incidents at Yale on his blog, he adds that the experiences of his peers, and many other students of color, are “about real experiences with racism…that have gone unacknowledged for far too long.”

By focusing on how these students are behaving rather than on why so many students of color across the United States are so angry, critics like Woessner and Friedersdorf completely miss the point.

Students are not just “bullies” complaining about some fictional issue. These are moments that are daily realities for many students of color. By addressing these experiences, student activists are attempting to reshape the narrative used to discuss race in the United States and to shatter the “post-racial” illusion many believe exists.

Students are shaping this narrative in a variety of ways. Many are creating social clubs and working groups emphasizing dialogue among students, as seen in Georgetown University’s Working Group on Slavery, Memory, and Reconciliation. Thanks to this student-led initiative, President John J. DeGioia has agreed to change the names of Mulledy Hall and McSherry Hall. The halls were named after Thomas F. Mulledy, S.J., president of the university from 1829 to 1838 and 1845 to 1848, and William McSherry, S.J., president from 1838-1839; both also sold slaves.

Platforms like Facebook and Twitter are also some of the most powerful tools available for student activists today. Following the events at Mizzou, students from universities across the country were able to share their stories under many hashtags, including “#ConcernedStudent1950.”

Another example of students discussing race occurs every year in Washington, D.C., at the Ignatian Family Teach-In for Justice. This year a record 1,700 students and faculty traveled to D.C. to speak and reflect on issues like racial justice.

One of the most stirring speeches came from Brendan Underwood, a senior at St. Louis University High School. The 18-year-old spoke on the death of Michael Brown, which occurred just three miles from his home. He described the indignation and fear he felt when he realized that the fate of Brown could have easily been his own, or that of his two brothers. Underwood added that this led him to create the Student Teacher Association for Racial Studies, or STARS.

Isaiah Blake, a junior at Xavier High School in New York City I met at the Teach In, told me how he’s used Alex Mikulich’s “Breathing Space: Jesuit institutions must do more to undo racism” (America, Oct. 26, 2015) to discuss racism in the United States with his peers. Describing the Teach In on his school’s website, Blake says it has "strengthened [his] desire to work to combat these problems for the rest of [his] life.”

It is not easy to discuss race in the United States, particularly because many of the painful memories of oppression are still quite raw for so many. And yes, activists must listen, even at times when opposing views seem oblivious to their experience.

But those on the other side, those who are quick to dismiss and criticize these activists, must also listen. They should not refute the experiences of these students simply because they have never experienced the racism or oppression being described. There should be a conscious effort to give up their preconceptions and try to understand the experiences of another, for, as James Baldwin once stated, “ignorance is the most ferocious enemy justice can have.”

Olga Segura
@OlgaMSegura
Show Comments (
3
)
Comments are automatically closed two weeks after an article's initial publication. See our comments policy for more.
alan macdonald
6 years 9 months ago
I think the true oppressed on these campuses are the straight, white students and teachers who are there for an education only to be interrupted daily by these shenanigans.
Bill Mazzella
6 years 9 months ago
Thank you for this Olga. This helps some of us get some notion of what is going as this phenomenon seems as sudden as it is widespread in so many campuses. Shades of 1968? Glenn Beck was quoting on Fox News tonight claiming that one of the Black student groups quoted Rap Brown and how " we must complete his revolution." Meaning overthrow of the government. I assume you are not allied with any such group if one exists at all. It was helpful that you cited the president of Georgetown's efforts to come to terms with the reasonable expectations of the Afro/American group. Further, you noted that this prejudicial behavior is exhibited against other minority groups. 1968 occurred in the background of the Vietnam war and the Civil Rights movement. The latter still needs to be completed. Hopefully, dialogue will replace bitterness and resentment so we can make progress on equal rights for everyone.
Peter Cerneka
6 years 9 months ago
Olga thank you for your thoughtful piece. I agree with you that the "why" behind student protests around race is a very important question. It is imperative that we all struggle with and try to understand the experiences of people of color. Their pain is real. They face situations daily that, as I white man, I will never face. In addition to that, however, I contend that the "how" of the protests is of equal importance. A lot of the actions taking place over the last few weeks, and to a larger extent, over the last year or so, seem to be centered on "the end justifies the means." Because people of color face violence and loud and quite discrimination everyday, because people of color are bullied and their concerns silenced, the protest have the right to bully, discriminate and use violence in order to make a point. Christ saw things differently, and we should too. These just challenges by our brother and sister protesters should be treated with respect, attention, and action, but this process needs to be done with love, civility and care for one another at its heart.