It turns out God loves Cleveland after all.

It turns out God loves Cleveland after all. 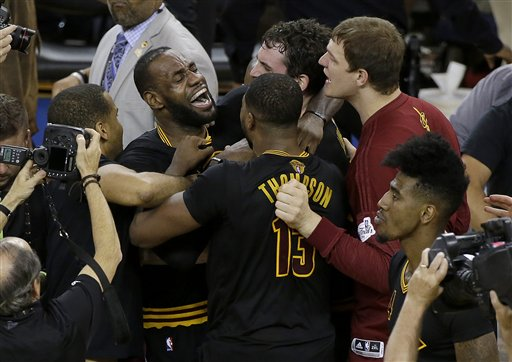 I was talking to my grandfather yesterday to wish him a happy Father’s Day when naturally, our conversation turned to the most important game in Cleveland’s history.

“It seems like it; but who knows, it is Cleveland after all,” he replied.

I understood his hesitation. I had been going through my own gamut of emotions after the Cleveland Cavaliers forced a game seven against the Golden State Warriors on Thursday. Sure, the previous 32 teams that had faced a three-games-to-one deficit had failed, and we were up against a team who had set the NBA record for most wins in a regular season, with a 73-9 record. But we had decisively won two games in a row, and it seemed like the sports zeitgeist was blowing a championship in from Lake Erie.

Yet all of Ohio had good reason to have their hope nestled next to paralyzing anxiety. It had been 52 years since any Cleveland professional sports team had brought home a championship. Worse, we had been so close so many times. (A quick rattling off of heartbreaks: Red Right 88;The Drive; The Fumble; The Shot; The Browns moving to Baltimore and then winning a Superbowl;1997 World Series;  2007 NBA Finals; The Decision; 2015 NBA Finals)

When The Upshot at The New York Times ranked the most cursed sports cities in America, Cleveland topped the list. Bill Simmons was famous for his “God Hates Cleveland” bit. When you considered not only the stats of the drought, but the high-level drama that accompanied so many of our close calls, it was easy for many, like my Grandpa, to think, well, maybe God did have a beef with us. (Maybe it was because we let our river catch fire? It’s been cleaned up, we promise!)

I remember when Cleveland drafted LeBron James, the hometown child prodigy, in 2003. Hopes were high; maybe this would be the end to our curse—not right away, but certainly it was coming. I remember salivating while opening my first pair of LeBron sneakers under the Christmas tree.

But the championships didn’t come. There were rumors that he was leaving. I wasn’t exactly a kid anymore, but I was worried that my childhood hero was going to break my heart. Then LeBron took to an hour-long national television special to announce that he was heading to play for the Miami Heat. Miami. Where there were already championships hanging from the rafters. Where he would join a team of superstars. Now, I didn’t burn my LeBron jerseys, but I boxed them up, took down my posters and as I was stepping into my role as editor in chief of my high school paper, I dedicated my first column to a damning open letter to the hero who let me down.

Fast forward four years, and there are rumors again. Would he be coming home? I sat at my summer job in Chicago with Cleveland sports radio in my ear the entire week, waiting for some indication that what we had hoped was true.

Then LeBron dropped his own letter. He wrote that he was leaving his cast of superstars in Miami to come home to a team that in his four-year absence had racked up the worst record in the NBA. But it was home.

He explained that, “Miami, for me, has been almost like college for other kids. These past four years helped raise me into who I am. I became a better player and a better man. I learned from a franchise that had been where I wanted to go.” You can imagine the chills that I, the first in my family to go to college, felt reading that hundreds of miles away from Ohio.

And so LeBron turned his back on a far easier road to do the unthinkable: bring Cleveland a championship. Not only that, but he pledged to do his best to revitalize an entire community:

I feel my calling here goes above basketball.... My presence can make a difference in Miami, but I think it can mean more where I’m from. I want kids in Northeast Ohio...to realize that there’s no better place to grow up. Maybe some of them will come home after college and start a family or open a business.... Our community, which has struggled so much, needs all the talent it can get.
In Northeast Ohio, nothing is given. Everything is earned. You work for what you have.
I’m ready to accept the challenge. I’m coming home.

Some may shake their head today, wondering why their friends from Ohio are this excited over a game. This was a victory for a people who have lost so much, and not just in sports. Yes, this was one of the greatest NBA Finals games in history, and yes, it was one for many different pages in the record books. But as LeBron James knows, this goes above basketball. This is for people, like my grandfather, who work so hard and love their communities and families so deeply. This is for never giving up. This is for home.

Turns out, God does love Cleveland.

Show Comments (
2
)
Comments are automatically closed two weeks after an article's initial publication. See our comments policy for more.
DANIEL VANBELLEGHEM
3 years 11 months ago
I was thinking 68 years since the World Series of 1948 - Go Tribe; Go Cavs I'm glad loves us again - like Job. -Dan VanBelleghem
Andrew Di Liddo
3 years 11 months ago
Yesterday, while the parade and celebration jammed the streets of Cleveland, I was 50 miles away in Alliance, Ohio participating in a focus group for strategic planning for our public library. Everybody in the meeting was excited and chatted about what we were seeing on TV and live streaming going on up in Cleveland. $30 to park my car? $1 for a bottle of water on a very hot day? No thanks. On my way to that meeting I had to drive past the Food Bank and was floored by the number of people and their down and out faces lined up in the street waiting for the Food Bank to open. There was no celebration for them other than a glimmer of hope to eat soon.
Advertisement