Fighting Poverty and Building Bridges: An Invitation from Pope Francis 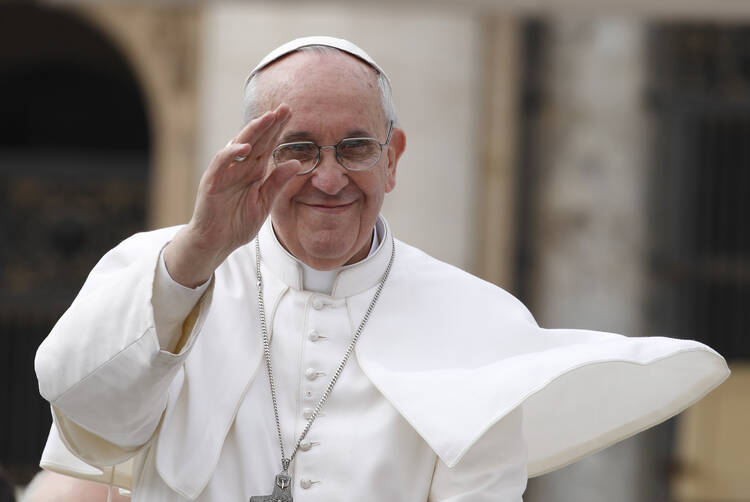 Holy Week and Easter are where the rubber meets the road of our faith. We look horrific suffering and death in the eye, and wonder how God can be present through it all, calling us closer, to new life? We are called to be an Easter people. But do we truly believe in the resurrection, not just as a historical fact 2,000 years ago, but as something we are called to participate in today, to bring new life to places of death and suffering in our world?

Our new Pope Francis, in his choice of name and first actions as pope, is calling us to a renewal of these basics of our faith. St. Francis of Assisi is celebrated for his ministries of peace, care for the poor, and care of creation. Pope Francis calls us to dedicate ourselves anew to these vocations.

Where were you when the white smoke blew, when you first heard this invitation to renew? I was with the papal nuncio, Archbishop Francis Chullikatt, giving a talk at the United Nations in an event sponsored by the Holy See Mission to the United Nations, as part of the meetings on the U.N. Commission on the Status of Women. I discussed the church’s work to end violence against women around the world, the effective work of religious communities to stop human trafficking, the church’s work to combat rape as a tool of war in conflict zones around the world such as the Democratic Republic of Congo. After our public remarks to a gathering of UN ambassadors and representatives of NGOs, we gathered around the Nuncio’s smart phone and some lap tops to see who would emerge on the Vatican balcony, watching ancient rituals conveyed instantly on the flashing screens of 21st century technology.

This is the challenge Pope Francis calls us to today. How can we continue to practice these old vocations, to bring peace, serve the poor, and care for creation, to be an Easter people, among the challenges of 21st century life? We will take up these challenges April 9-10 at a conference, open to the public, at the Catholic University of America, co-sponsored by the U.S. Conference of Catholic Bishops and over a dozen other Catholic organizations Fifty years ago, in the shadow of the Cuban missile crisis, Blessed Pope John XXIII wrote the encyclical “Pacem in Terris,” Peace on Earth, calling on all people of good will to work together to build peace. How are we carrying that challenge forward today? Cardinal Peter Turkson, president of the Pontifical Council for Justice and Peace, will discuss the church’s work on justice and peace globally. Bishop Richard Pates, chair of the Committee on International Justice and Peace for the U.S. Bishops Conference, will speak of church efforts to build peace, including his experiences in his recent trip to Iraq ten years after the US invasion. Former America Editor-in-Chief Fr. Drew Christiansen, S.J., will give a plenary address on human rights.  America's  Washington correspondent John Carr, as well as many other America contributors, are also featured.

“Fighting poverty, both material and spiritual, building peace and constructing bridges: these, as it were, are the reference points for a journey that I want to invite each … to take up.”  Pope Francis posed this invitation in remarks to the diplomatic corps; how will we respond?

Maryann Cusimano Love
Show Comments (
2
)
Comments are automatically closed two weeks after an article's initial publication. See our comments policy for more.
Bill Collier
8 years 8 months ago
The conference agenda looks very interesting? Will video of the sessions be available online at some point? Thx.
Jacqueline MCGEE
8 years 8 months ago
I too wonder if the conferences will go online at some point. I am noticing that I feel more of a sense of urgency myself to do something, along with experiencing a much more optimistic point of view now.