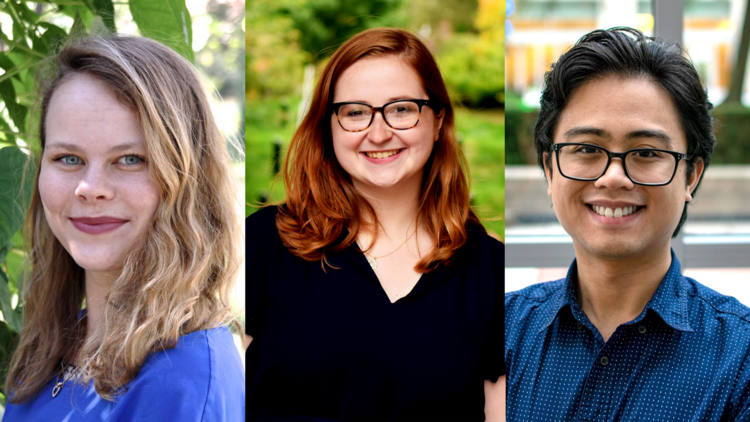 NEW YORK, N.Y. - The Rev. Matthew F. Malone, S.J., president and editor in chief of America Media, announced today the selection of three graduating seniors from U.S. Jesuit colleges and universities to serve as the 2020-21 Joseph A. O’Hare, S.J., Postgraduate Media Fellows. This year’s fellows are:

“This is a highly competitive program and unique opportunity for graduating seniors interested in pursuing a career in journalism,” said Matt Malone, S.J., “and we are proud to continue offering this opportunity by welcoming Molly, Erika and Kevin as the fifth cohort of fellows to become a part of the America team.”

The O’Hare fellowship is made possible through the generosity of William J. Loschert, of Fordham University’s Gabelli School of Business, Class of 1961, and a member of America Media’s board of directors.

Molly Cahill will graduate from Boston College in May with degrees in philosophy and theology. She has been involved with B.C.’s campus ministry programs, leading the student group to the Ignatian Family Teach-In for Justice and traveling to the U.S.-Mexico Border and Guatemala with the Arrupe International Immersion Program. A lifelong singer and lover of music, Molly performed for a crowd of thousands at B.C.’s Pops on the Heights event in 2018, joining the Boston Pops and Lionel Richie. Her passions include migration, gender and sexual ethics, and the sex abuse crisis. She is eager to delve into them at America!

Erika Rasmussen is graduating from Santa Clara University in the spring after dedicating her undergraduate career to studies in English and sociology. Originally from Denver, Colo., she is a creative writer and journalist driven by a thirst to connect deeply and to love authentically. She served as poetry editor for the university’s literary and arts magazine, The Santa Clara Review, and has enjoyed reporting on human interest pieces as well as arts and culture in Silicon Valley. She is adamant that because every life matters, every story matters; and she and hopes to bring passion and justice to any story she helps to tell.

Kevin Christopher Robles is a senior graduating from Fordham University, where he has studied English and film. Originally from the Philippines, Kevin moved to New York City when he was 8 years old and has lived there since. He served as the Arts & Culture editor for The Observer, Fordham’s award-winning student newspaper, as well as creating and hosting its news podcast, “Retrospect.” As shown through his work as a college prep coach, advocating for migratory rights and the environment, and his work with Model United Nations, Kevin is committed to social justice and helping the least among us. Kevin was previously a summer intern for America in 2019.

America Staff
Show Comments ()
Join the conversation: Login or create an account
Before you can comment, you need to update your profile to include your first and last name, as required in our comments policy. Then reload this page and you'll be set up for commenting. Update your profile
Show Comments ()
Comments are automatically closed two weeks after an article's initial publication. See our comments policy for more.