‘The Two Popes’: A Screening and Discussion with Director Fernando Meirelles 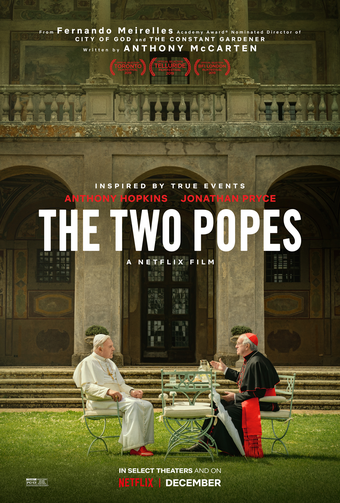 'The Two Popes': A Private Screening of the Golden Globe nominated film

America Media and Netflix invite you to join us for a private screening of the Golden Globe nominated film "The Two Popes" followed by a Q&A with Academy Award nominee director Fernando Meirelles. The conversation will be led by John Anderson, America's film critic.

ABOUT 'THE TWO POPES'

In America John Anderson called “The Two Popes” a "fly-on-the-tapestried-wall account of a one-on-one conclave between Pope Benedict XVI (Anthony Hopkins) and pontiff-to-be Jorge Mario Bergoglio (Jonathan Pryce)." He described it as "a tour-de force of acting, of actors interacting, of actors dueling and dancing” that tackles “the weightiest questions confronting the church—not just about financial crimes and sexual abuse but dogma, ritual and the Christian mission.”

Fernando Meirelles is a director, producer and screenwriter. He is the director of “City of God” (2002), which received more than 50 international awards and was nominated for four Academy Awards, including Best Director. For the last 20 years, Meirelles has split his time between directing international features and TV series in Brazil. “The Constant Gardener” (2005), Meirelles’ follow-up to “City of God,” received four Academy Awards nominations and three Golden Globe nominations. In 2008, his film “Blindness” opened the Cannes Film Festival. And, in 2011, his film “360” opened the London Film Festival. In the same period, he directed several series for TV Globo and HBO.

In addition to cinema, Meirelles directed the opera “Pearl Fishers” by Georges Bizet and was one of the directors of the opening ceremony for the 2016 Olympic Games in Rio de Janeiro. Meirelles is based in São Paulo, Brazil, where his wife, two children and three grandchildren also reside. His fourth grandchild will arrive in January.

America Media Events
@americamag
Provide feedback on this article
Join the conversation: Login or create an account
Before you can comment, you need to update your profile to include your first and last name, as required in our comments policy. Then reload this page and you'll be set up for commenting. Update your profile
Show Comments ()
Comments are automatically closed two weeks after an article's initial publication. See our comments policy for more.