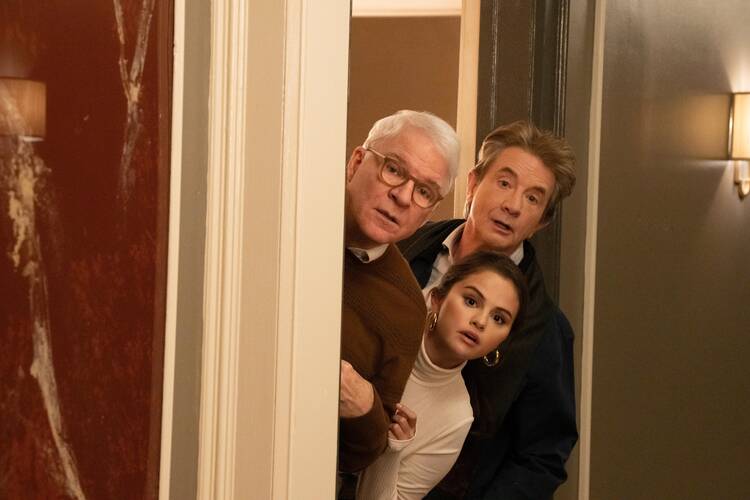 There is little reason to believe that Pope Francis is aware of “Only Murders in the Building,” the quirky murder mystery/comedy that recently wrapped up its second season on Hulu. It is even more improbable that he has watched any of it (especially given the fact that he made a vow to Our Lady of Mount Carmel 30 years ago to stop watching TV). Even if he somehow did come upon the show, some of the language and situations might be tough to get past.

But “Only Murders,” starting with its three principal characters, played by two septuagenarians, Steve Martin and Martin Short, and a millennial, Selena Gomez, offers something Francis has talked about repeatedly during his pontificate: intergenerational friendships, in all their power and complexity.

“Only Murders in the Building” offers something Francis has talked about repeatedly during his pontificate: intergenerational friendships, in all their power and complexity.

Earlier this summer, Pope Francis—who freely describes himself as old—wrapped up a seriesofaddresses at his weekly audiences on the topic of old age. It’s a significant topic, given the demographic changes in our world, and one that has been largely overlooked by theologians. While most reflections by popes at these audiences escape public notice, the topic of aging is one that deserves our attention as a church, for at least three reasons.

First, both in absolute and relative terms, the number of older adults in the world is large, growing rapidly and unlikely to decline. Second, as the Covid pandemic and our eagerness to move past it have shown most vividly, many of us would rather not think about the demands that an aging population places on our consciences. When “getting back to normal” has endangered older adults who have been at higher risk of hospitalization and death from Covid, the underlying sentiment has frequently seemed to be, “Well, they’re going to die anyway.” This is fundamentally at odds with Catholic social teaching on the sanctity of life and the essential dignity of all human beings. And third, when old people are considered in the church and in society, they are usually in the West seen as burdens to be endured rather than fellow actors to be included. We may have “care plans, yes; but not plans to let them live to the full,” as Francis said in his first address.

This brings us to the Arconia, the fictional Manhattan apartment building in which “Only Murders” takes place. The characters at the center of the show, Gomez’s artist, Mabel Mora, Short’s Broadway producer, Oliver Putnam, and Martin’s retired actor, Charles Haden-Savage, provide a remarkably complex treatment of how people might engage across generations. In the series pilot, it’s immediately clear that all three are lost, lacking energy, courage and/or focus to move forward. The one thing they each have going for them is a passion for the same true crime podcast, which they discover they share.

The characters at the center of the show provide a remarkably complex treatment of how people might engage across generations.

When a childhood friend of Mabel’s is murdered, the three undertake their own investigation (complete with their own podcast). And each finds inspiration to move forward from others in their shared sleuthing efforts. The young Mabel brings a spark to Charles’ weariness and a focus to Oliver’s scatteredness, just as the two elders bring some stability and connection to Mabel’s otherwise untethered life. While other characters in the show see the intergenerational team as an amusing oddity—and the writers occasionally fall back on age-stereotypical jokes in the trio’s banter—the depth of the show lies firmly in the ability of these three to cross generations to help each other grow.

Some of the show’s more touching moments come when one of the trio speaks up about how much they have come to mean to each other. When Mabel’s mother attempts to bring their project to an end, Charles and Oliver explain how working together with Mabel has made them feel more alive than they have in years. Later, in a showdown with a killer, Charles attempts to offer his life for his friends because he doesn’t want to live in a world without them. In another episode Mabel, talking to Charles’s stepdaughter, Lucy, confides that he reminds her of her own father.

Pope Francis exhorts elders to yield the role of protagonist to the supporting role of witness.

The series’s second season also features a moving demonstration of Pope Francis’ most demanding prescription for thriving in old age. In the third episode, “The Last Day of Bunny Folger,” Bunny, a lifelong resident of the Arconia and the longtime dictatorial ruler of the co-op board, is shown preparing her heir apparent, Nina, to be her successor. Unbeknownst to the audience or the principal characters prior to this episode, the imperious Bunny has a generous and sensitive side. She has been mentoring Nina not only by teaching her the ins and outs of the physical plant of their building, but by drilling Nina on the little details about the Arconia’s staff—who has kids, when their birthdays are and the like. Bunny shows herself to be as much a kindly mother-figure as she is an imperious monarch.

In several of his talks, Pope Francis exhorts elders to make a similar shift, to yield the role of protagonist to the supporting role of witness, to accept the peace of gratitude in place of the comfort of control. It is a difficult lesson and, if we’re honest, one we confront long before we reach old age. But Francis (though himself still a protagonist, as a world leader and head of a global church) believes firmly that it is an essential transition that elders must make in order for them to play the role society needs of them.

It is a transition Bunny beautifully prepares for, but ultimately refuses to make, with disastrous consequences. But even in this failure, the interplay between Bunny and Nina shows not only the possibilities for growth and wisdom that intergenerational friendships create, but also the challenges and sacrifices that such friendships require. Ultimately, a mentor has to be willing to sacrifice her own need for agency to enable a mentee to flourish, just as a mentee has to be willing to humble herself to accept the mentor’s guidance.

No, Pope Francis is most likely not a fan of “Only Murders.” Basing his teaching on old age in biblical examples is surely the richer and wiser choice. But if he is looking for some contemporary examples of the transition we must make as a society to fully include elders, he could do worse than sign up for a Hulu subscription and seek the show out. 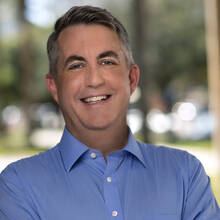 Jeff Johnson writes about faith at readingfrancis.com. He is a career long advocate for older adults and is based in St. Petersburg, Florida.