Pope Francis: The elderly have seen it all. If they can still have hope, we all can. 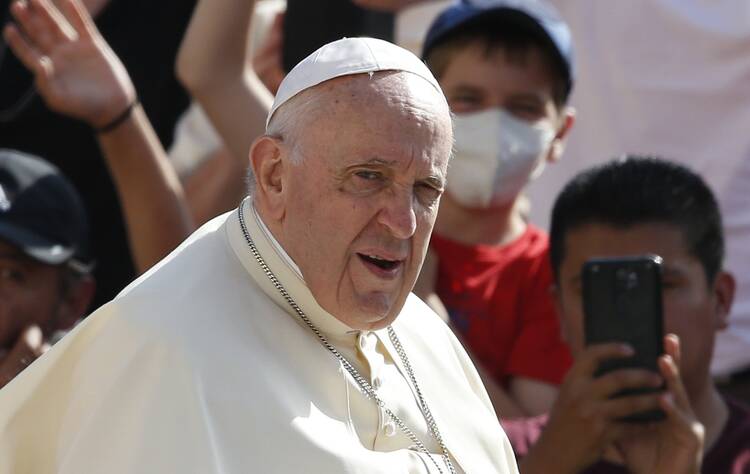 Pope Francis is pictured while greeting the crowd during his general audience in St. Peter's Square at the Vatican May 25, 2022. (CNS photo/Paul Haring)

Below is the text of Pope Francis’ weekly Wednesday audience, delivered on May 25, 2022.

In reality, Qoheleth’s continuous vacillation between sense and non-sense is the ironic representation of an awareness of life that is detached from the passion for justice, of which God’s judgment is the guarantor. And the Book’s conclusion points the way out of the trial: “Fear God, and keep his commandments; for this is the whole duty of man” (12:13). This is the advice to resolve this problem.

Faced with a reality that at certain times seems to us to accommodate every opposite, attributing the same destiny to all of them—which is to end up in nothingness—the path of indifference may also appear to us as the only remedy to a painful disillusionment. Questions like these arise in us: Have our efforts changed the world? Is anyone capable of validating the difference between the just and the unjust? It seems that all this is useless....Why make so much effort?

There is a kind of negative intuition that can manifest itself in any season of life, but there is no doubt that old age makes this encounter with disenchantment almost inevitable. Disenchantment comes in old age. And so the resistance of old age to the demoralizing effects of this disenchantment is decisive: if the elderly, who have seen it all by that time, keep intact their passion for justice, then there is hope for love, and also for faith. And for the contemporary world, the passage through this crisis, a healthy crisis, has become crucial. Why? Because a culture that presumes to measure everything and manipulate everything also ends up producing a collective demoralization of meaning, a demoralization of love, a demoralization of goodness.

This demoralization takes away our will to act. A supposed “truth” that limits itself to observes the world, also notes its indifference to opposites and consigns them, without redemption, to the flow of time and the fate of nothingness. In this form—cloaked in the trappings of science, but also very insensitive and very amoral—the modern quest for truth has been tempted to take leave of its passion for justice altogether. It no longer believes in its destiny, its promise, its redemption.

For our modern culture, which would like, in practice, to consign everything to the exact knowledge of things, the appearance of this new cynical reason—that combines knowledge and irresponsibility—is a harsh repercussion. Indeed, the knowledge that exempts us from morality seems at first to be a source of freedom, of energy, but soon turns into a paralysis of the soul.

If the elderly, who have seen it all by that time, keep intact their passion for justice, then there is hope for love, and also for faith.

With its irony, Qoheleth has already unmasked this deadly temptation of an omnipotence of knowledge—a “delirium of omniscience”—that generates an impotence of the will. The monks of the most ancient Christian tradition had precisely identified this illness of the soul, which suddenly discovers the vanity of knowledge without faith and without morality, the illusion of truth without justice. They called it “acedia.” And this is a temptation for everyone, even the elderly.... But it is [a temptation] for everyone. It is not simply laziness; no, it’s more than that. It is not simply depression. No. Rather, acedia—it is the surrender to knowledge of the world devoid of any passion for justice and consequent action.

The emptiness of meaning and lack of strength opened up by this knowledge, which rejects any ethical responsibility and any affection for the real good, is not harmless. It not only takes away the strength for the desire for the good: By counter-reaction, it opens the door to the aggressiveness of the forces of evil. These are the forces of reason gone mad, made cynical by an excess of ideology. In fact, with all our progress, with all our prosperity, we have really become a “society of weariness.”

Think about it: we are the society of weariness. We were supposed to have produced widespread well-being and we tolerate a market that is scientifically selective with regard to health. We were supposed to have put an insuperable threshold for peace, and we see more and more ruthless wars against defenseless people. Science advances, of course, and that is good. But the wisdom of life is something else entirely, and it seems to be stalled.

Think about it: we are the society of weariness. We were supposed to have produced widespread well-being and we tolerate a market that is scientifically selective with regard to health.

Finally, this uneffective and irresponsible reason also takes away meaning and energy from the knowledge of truth. It is no coincidence that ours is the age of fake news, collective superstitions, and pseudo-scientific truths. It’s curious: in this culture of knowledge, of knowing everything, even of the precision of knowledge, a lot of witchcraft has spread, but cultured witchcraft. It is witchcraft with a certain culture but that leads you to a life of superstition: on the one hand, to go forward with intelligence in knowing things down to the roots; on the other hand, the soul that needs something else and takes the path of superstitions, and ends up in witchcraft.

From the wry wisdom of Qoheleth, old age can learn the art of bringing to light the deception hidden in the delirium of a truth of the mind devoid of affection for justice. Elderly people rich in wisdom and humor do so much good for the young! They save them from the temptation of a knowledge of the world that is dreary and devoid of the wisdom of life. And these elderly people also bring the young back to Jesus’ promise: “Blessed are those who hunger and thirst for righteousness, for they shall be satisfied” (Mt 5:6). They will be the ones to sow the hunger and thirst for justice in the young.

Take courage, all of us older people! Take courage and go forward! We have a very great mission in the world. But, please, we must not seek refuge in this somewhat non-concrete, unreal, rootless idealism—let us speak clearly—in the witchcraft of life.