Maggie Rogers describes making music as a religious experience. It shows on her new album, ‘Surrender’ 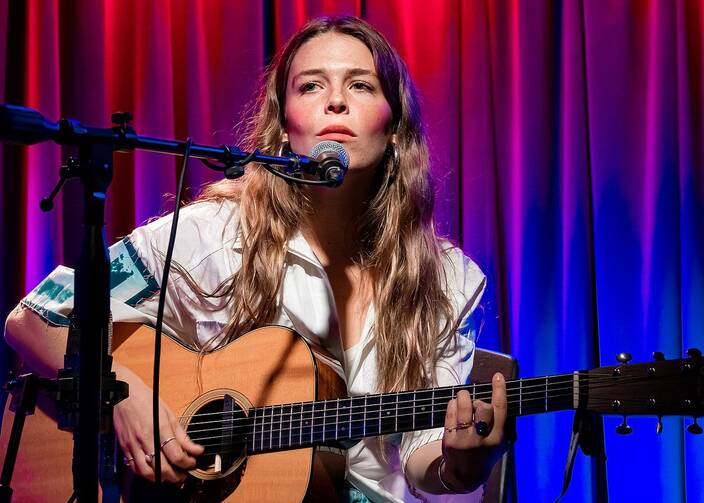 Maggie Rogers performs at the Grammy Museum on September 15, 2019. Image from Wikimedia Commons.

How many pop albums come with a reading list?

Usually, we can only speculate as to the source material for our favorite songs, relying on the snippets that artists provide in their interviews. But the indie-pop star Maggie Rogers is anything but conventional. Her sophomore album “Surrender” comes with a lineup of recommended books, ranging from classics to brand-new reads. Her list includes Thoreau’s Walden, Woolf’s To the Lighthouse and Bronte’s Wuthering Heights, all placed right alongside Thrust by Lidia Yuknavitch, a novel published just this year.

Vulnerability defines “Surrender.” The album is transparent in a way that most music in Rogers’s genre is not. She writes lyrics that are honest, full of tiny details that add up into a vivid stream of images. She confesses deeply personal and unglamorous feelings and accompanies these with a list of the literature that inspired her latest songs.

The album is transparent in a way that most music in Rogers’s genre is not. She writes lyrics that are honest.

Her uniquely candid music has drawn many fans. She became an overnight sensation when the famed producer Pharrell Williams heard her work at a New York University masterclass. “I have zero notes. You’re doing your own thing, it’s singular,” he told her. “Your whole story, I can hear it in the music.” The song Rogers played, “Alaska,” sampled her own snapping and tapping as the backbone of its rhythm track; the song is built around Rogers acting as her own instrument.

Rogers made headlines about a year ago when she took her career in yet another unusual direction: She enrolled at Harvard Divinity School to study Religion and Public Life. “Surrender” formed part of her thesis. She describes music-making as a religious experience for the way it unites the fans and gives her joy. She graduated from the program in May.

The 12-track album is a collection of love songs. Rogers mostly addresses herself to a romantic interest, but several of her songs explicitly invoke others, including a close friend or even the world at large. No matter whom she addresses, the love in “Surrender” is unconditional love. In each song, she professes she would do anything for the person she loves. The result is exhilarating, love that laughs in the face of both cynicism and of hope. “Right now, the joy on the record feels like the greatest form of rebellion,” she told The New York Times. It is, she affirmed, “joy with teeth.”

“Right now, the joy on the record feels like the greatest form of rebellion.”

The album’s lead single, “That’s Where I Am,” tells the story of a love for a friend that has been kept hidden for years because it appeared unrequited. Rogers sings over and over in the chorus:

It all works out in the end

Wherever you go, that’s where I am.

The singer hints that eventually her affections are eventually returned and that there is victory for those who endure in love. But she never quite admits outright the love between them and appears to refuse to give the listener a happily-ever-after ending. Ultimately, this is, perhaps, because the song is about loving someone persistently, no matter the results. The delight in the track floats untethered, completely independent of what her beloved chooses to do. This single set the tone for the album that followed.

In the somber “Anywhere With You,” Rogers asks:

Would you tell me if I ever started holding you back?

Would you talk me off the guardrail of my panic attack?

Look me straight in my center and tell me from the heart,

Are you ready to start?

These lines sound like an all-cards-on-the-table experience for the singer. She wants her partner to be happy, even if that means a life apart from her, but she also relies on that person for stability and comfort. She offers these two unguarded desires, asking her partner to understand the vulnerability at her “center” before committing to their love.

Rogers twice uses the image of a guardrail. In “I’ve Got a Friend,” the image is used outside of a romantic context, which contrasts with the lyrics she wrote and sings in “Anywhere With You”:

I’ve got a friend who’s tangled up inside,

Tried to hold her hand the day her mother died

I’ve got a friend who’s been there through it all,

Talked me out of jail, talked me off the panic rail

The song continues with the transparency that characterizes “Surrender,” laden with personal details about the moments that made Rogers and this friend so close. In the context of the whole album, it makes a pivotal statement about her perspective on love. Through repeat images, like the guardrail and dancing together, which feature in other songs, she elevates an intimacy between friends to the same level as her romantic relationships. Love is love for Maggie Rogers, and she wears it on her sleeve unashamed.

Each song tells its own story of the challenges and ecstasies of surrendering to love.

I could write about each song on this album individually—the “joy with teeth,” as Rogers said, of the upbeat track “Shatter,” or the slow, longing “Horses” driven by acoustic guitar and more. Each tells its own story of the challenges and ecstasies of surrendering to love. The final song on her album, “Different Kind of World,” is a plea for peace.

My knees are aching, back is breaking

Thinking ’bout the state of the world

When we’re riding all together

It's a different kind of world

I fell in love with Maggie Rogers listening to her debut album, “Heard It in a Past Life,” another deeply spiritual collection about nature and inner peace. Her path of self-discovery through songwriting begins beautifully on that album. She drew me in with her incredible musical abilities, of course, but also with the unassuming and enlightened quality of her songs. For the uninitiated, I would recommend starting with “Heard It in a Past Life.”

And guess what? She published a reading list for it.