You’re not a Bad Catholic. You’re just in your ‘Sleepy Peter Era’ 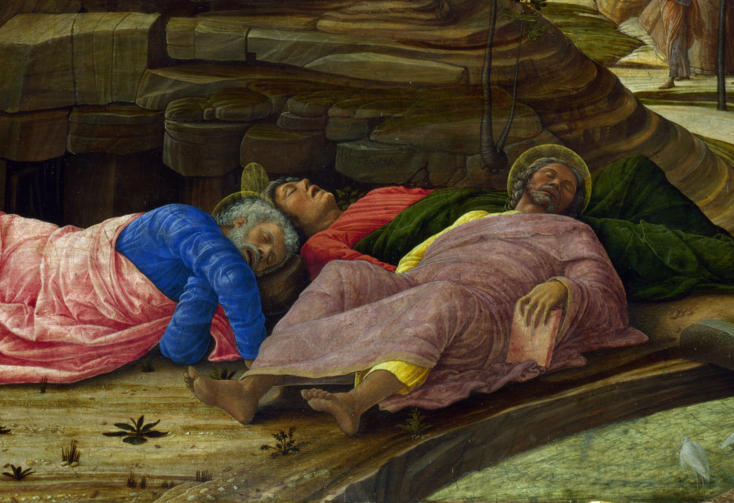 “Agony in the Garden,” by Andrea Mantegna c. 1460 (Wikimedia Commons)

This week in The Washington Post, Jessica M. Goldstein recounted the modern trend of playfully describing periods of your life as an “era.” Remember that time of your life where you grew your hair out and had that grungy beard and wore sandals even though you live in Duluth? That was your Jesus Era. Or those months where you did not know how to text properly but still did it way too much? That was your “Cringe Emoji Era.”

My favorite example that Ms. Goldstein cites is from Jenny Lewis, @permanentefficacyofgrace on TikTok (great handle; I see you, girl). She stands outside, a bag of groceries hanging from her shoulder as Louis Armstrong’s “La Vie en Rose” plays in the background. “idk about y’all,” Lewis writes, “but i’m in my baguette and cheese and flowers era. my wasting money era. my bougie overpriced dickensian peasant food era. my ignore my cascading credit card debt era. my film embarrassing tickity tonks [i.e., TikToks] in public era. my denial era.”

Ms. Goldstein’s piece offers a delightful deep dive into this practice. (I particularly appreciated her decision to ask the curator of dinosauria at the Smithsonian’s National Museum of Natural History about what the term “era” means from a geological perspective.) And a key observation amongst the non-Jurassic experts she talks to is the relationship between this trend and feelings of embarrassment. Often people use “era” to describe a part of their life, past or present, that they regret in some way. Ms. Lewis doesn’t like digging herself into debt just to buy food. I might describe college as my “Mistakes Were Made Era” (because they definitely were).“Why be burned with the shame of feeling like a flop,” asks Ms. Goldstein, “when you can just say, hey, it’s only a flop era?”

Remember that time of your life where you grew your hair out and had that kind of grungy beard and wore sandals even though you live in Duluth? That was your Jesus Era.

I find something tremendously liberating in all this. Even after they have long since passed, failure and shame have a way of lingering in our minds, like a stink that just won’t go away. By calling that time or series of not great choices an “era,” you recontextualize that experience. It is something that happened at a point or during a period in time that is now, emphasis added, over.

Rather than having this time in your life define you, you are now the one defining it. And humor used seems to be key; describing a period of time when I kept getting dumped or wasn’t allowed to drive the school buses at my summer job because I kept scratching them as an “era” is a way of taking the sting out of them. It’s not just a sign that I have gotten past the pain of those events; it’s a method of bringing about liberation. It’s like the tradition in Bavaria of asking the priest to make the congregation laugh on Easter; laughing at those things that I’m afraid of or that have hurt me diminishes their power over me.

Historically speaking, our choices in the Catholic Church have often been framed in a very high stakes, black-and-white way. If you do X, you’re a good person. If you do Y, you’re a bad one. If you get divorced or you’re involved in a sexual relationship outside of marriage, you’re bad. If you tithe your 10 percent or go to Mass every Sunday, you’re good. Over the years, that way of thinking has done damage to a lot of people, particularly those who take their faith very seriously. I was enormously heartened in my studies for the priesthood to have our moral theology professor, James F. Keenan, S.J., point out that there is a distinction we need to make between right and wrong and good and bad. Drawing from his work on Thomas Aquinas, Keenan explained that right and wrong are the categories we use to describe our decisions, our actions, our choices, based on the moral principles or laws that we live by. If I run a red light, I did something wrong. If I helped someone cross the street, I did something right. Judging our decisions and trying to learn from them is the constant process of our lives.

By calling that time or series of not great choices an “era,” you recontextualize that experience. It is something that happened at a point or during a period in time that is now, emphasis added, over.

Good and bad, Father Keenan went on, are categories for the overall state of a person, a judgment of their soul. That is why being labeled good or bad is so high-stakes for people when they hear a confessor, preacher or teacher suggest it; it is a judgment of not what they do but who they are in their deepest selves. And the fact is, no one can see the truth of that except God—not even the person themselves. So we, as individuals and as church, should never identify a person as bad, nor imply the same. That exceeds our capacity to know.

To my mind, “era” language offers a creative way of freeing ourselves from some of the things that we believe we’re not living up to. Parents of young children, you’re not bad parents for getting to church late, for bringing cereal and iPads to the pews or for the fact that your child will not stop crying. You’re in your “My Life Is Not My Own Era,” your “I Have Way Bigger Things to Worry About Than Your Opinion, Like Surviving the Day Era.”

High school or college grads who stop going to church for a time, you’re not bad people for sleeping in after a night out sometimes or skipping Mass for brunch on an occasional Sunday. You’re in your “Jesus Loved a Good Party Era” or your “Sleepy Peter Era” or your “Payback for all Those Years of Mediocre Religious Education Era.”

And there’s a way this kind of terminology can be empowering for us as Catholics. People who are angry or disappointed with the Catholic Church or, for that matter, God right now, your frustrations or your questions do not make you evil or a sinner. You are in your “Prophet Jeremiah Era,” dropping truth whether others like it or not. You’re in your “Martha at Lazarus’ Tomb Era,” calling Jesus and church leaders to justify themselves. You’re in your “Jesus Drives Out the Moneychangers Era,” refusing to accept un-Christian practices in our communities.

If there’s something you have hanging over your head, some part of your past that you’re not proud of, maybe take a step back and try to look at it with fresh eyes. That isn’t who you are. It was just an era.