‘Star Wars’ has a race problem — and casting more people of color won’t fix it. 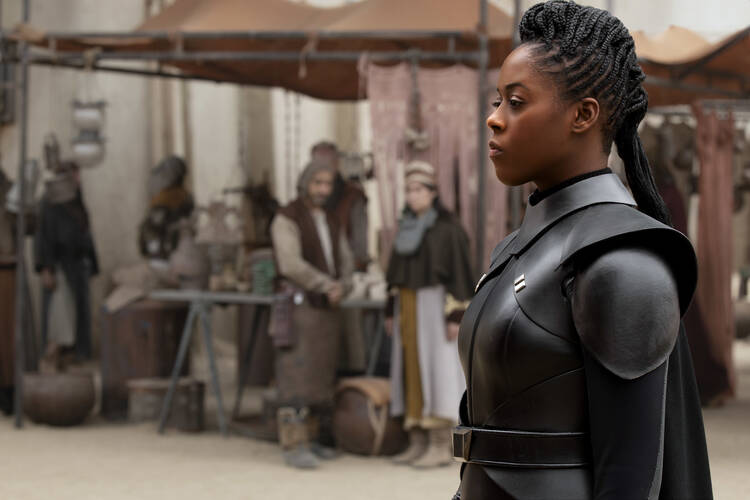 One of my all-time favorite “Star Wars” things is a poster for “Episode I: The Phantom Menace.” A young Anakin Skywalker takes a step away from home, a backpack on his shoulders, as though it’s his first day of school. The sun casts his shadow onto the wall behind him. But rather than the profile of a child, it has the shape of Darth Vader.

It’s a deeply disturbing image, but I have always drawn a strange solace from it. We all have shadow sides, parts of ourselves that we consider monstrous, and desires that could be. Most of us have been taught to bury those things deep within us, but real freedom comes through facing them. It’s not a coincidence that the first thing many people in Scripture do when they meet Jesus is reject him. His presence naturally draws out the darkness within us so that we can see it and be free.

In some ways, “Obi-Wan Kenobi,” the new Star Wars miniseries that finds Obi-Wan and Darth Vader meeting again 10 years after “Revenge of the Sith,” is offering its own confrontation with the dark side of Star Wars, although unintentionally so.

For some years now the Star Wars franchise has been faced with a virulent strain within its fandom that harasses and threatens actresses and people of color who are given significant roles. These fans claim that the move to make Star Wars more diverse represents a betrayal of the saga, in that it attempts to inject the politics and anxieties of our world into a story that was never about that. Don’t impose your 21st-century prejudices and anxieties on my universe, the argument goes.

There is a lot about this argument that is wrong. Though each film begins famously, “A long time ago in a galaxy far, far away,” the origins of the Star Wars saga are deeply rooted in George Lucas’s real-world concerns about totalitarianism. Plus, one of the things that has always distinguished Star Wars is its “window on a whole world” aesthetic. Watching a Star Wars story there is always the sense of so much more going on outside the frame. Even characters who are glimpsed wandering through a shot or operating in the background are given names and their own action figures. We’re always only following one story amid a whole universe of others.

The introduction of more people of color and women to Star Wars series is a correction of an error, not an error in itself.

Given this, the idea that everyone we meet should be white, straight and/or male actually contradicts the rules of that world. The introduction of more people of color and women in the most recent Star Wars movies and television series is a correction of an error, not an error in itself.

It’s true that Star Wars spent almost 40 years being a story mostly about white people. “Episode VII: The Force Awakens” was the first live-action Star Wars film to feature a person of color in a leading role or a woman as the lead, and that came out just seven years ago. The weight of that history has an impact. The sequel trilogy (Episodes VII-IX) was a mess when it came to race and gender; Finn, the Black former stormtrooper who was the co-lead of Episode VII and has tons of chemistry with his fellow lead Rey, becomes more of a supporting character in the latter films, mostly so that there is more room for Kylo Ren, another white guy. John Boyega, who played Finn,told GQ later, “What I would say to Disney is do not bring out a Black character, market them to be much more important in the franchise than they are and then have them pushed to the side.”

Similarly, the Vietnamese-American actress Kelly Marie Tran leapt off the screen as Rose Tico in Episode VIII. She was an instant favorite, and also a key element in that film’s idea that the Star Wars saga extends far beyond the Skywalker clan. But then in Episode IX, Tico had almost no part at all.

The African movie star and electrifying Oscar winner Lupita Nyong’o was likewise cast in the sequels, then barely used and in a CGI role. The breakthrough “Game of Thrones” star Gwendolyn Christie was cast as the kick-ass head stormtrooper, then given little to do but be a punching bag for the good guys.

“Rogue One” was fantastic, and starred characters who were Black, British-Pakistani, Mexican and Chinese alongside a white female lead.

Meanwhile, where did most of the story go? To Rey, Kylo, Luke, Leia, Han and the Emperor, a.k.a. the white characters.

The years since have seen some progress. “Rogue One,” which came out between Episodes VII and VIII, was fantastic, and starred characters who were Black, British-Pakistani, Mexican and Chinese alongside a white female lead. “The Mandalorian,” the franchise's first foray into television, has a Spanish lead (though his face is permanently hidden under a helmet), and has included strong women and significant characters who are Black, Asian and Maori. But then last year’s spinoff “The Book of Boba Fett” struggled to find a compelling storyline for its Maori and Asian-American leads. It also massacred an entire Indigenous community mostly just to force the main character forward on his journey.

And this brings us to “Obi-Wan Kenobi.” In some ways the series plays out like the very best of fan fiction, with the chance to see a very young Leia in action and Obi-Wan and the now Vadered-up Anakin meeting again. None of it makes a lot of sense relative to the larger Star Wars saga if you think about it too hard. Young Leia very clearly seems to have powers, despite the fact that in the original movies she does not; Luke is almost killed by someone with a lightsaber. But if you can let go there’s plenty to enjoy, including great returning performances from Jimmy Smits, Ewan McGregor and Hayden Christensen. After two prequel films in which he was almost entirely a shrieky teen-emo Jedi, super easy to manipulate and impossible to like, Christensen is fully in his element as the angry and impulsive Sith Lord. It turns out he was perhaps always the right person to play Anakin, it’s just that until now he was never allowed to play the Anakin that he was right for.

The choice to make Reva Sevander the driving force in a Star Wars story is thrilling.

While the miniseries is very much about the relationship between Obi-Wan and Anakin, the character at the center of it all is Reva Sevander, a Jedi hunter on the trail of Obi-Wan so as to get on Vader’s good side. Played with ferocity by Moses Ingram, Sevander is the first female Black villain in the entire Star Wars franchise. The choice to make her the driving force in a Star Wars story is thrilling.

But then the writers give her nothing to do. She scowls a lot, she yells, in one episode she interrogates a child…and that’s about it. Though she has Force powers and a very cool lightsaber, she gets just one real lightsaber fight, and it’s under circumstances that only serve to emphasize her foolishness. As the series goes on, her motivations keep changing, to the point that by the end she just seems weak and unstable.

How do you have a great actress in a groundbreaking role, and do so little with her?

This is not an isolated problem in the series. “Obi-Wan” also features a new female character of Indian descent, Tala Durith (played by the great British actress Indira Varma). Where Ingram's Sevander dithers, Varma’s Tala is decisive, helping Obi-Wan and a young Princess Leia escape from death more than once. She is clearly meant to serve as an inspiration for Leia, and she succeeds at that on every level.

Then she kills herself in an act of near-meaningless self-sacrifice. It’s not quite “fridging”—that is, the storytelling choice to kill a female character in order to motivate a male one. But just before she dies, she does give Ben a lecture that is meant to inspire him, so it’s pretty close. Here, too, the character represented something new and exciting to the Star Wars universe, the franchise’s first major character of Indian descent. She is also just an exciting character to watch, the kind of person you could build a whole series around.

The upcoming Star Wars series “Andor,” “Lando” and “Ahsoka” all center on people of color. Lucasfilm’s commitment to these series represents a very hopeful sign. Still, “Obi-Wan” was co-written by Hossein Amini, a British-Persian writer, and helmed by Canadian-Chinese director Deborah Chow, and still it couldn’t do right by its characters of color. The shadow of the saga’s poor history with race clearly continues to loom large.

Truly contending with that history involves more than simply casting more people of color. It means facing the bias that remains deep within the franchise and allowing oneself to be humbled by that fact. As in life, in Star Wars it is only by going into that dark cave and learning from it that one can truly be set free.