‘A Case for the Existence of God’ is not a theological argument. It’s a parable. 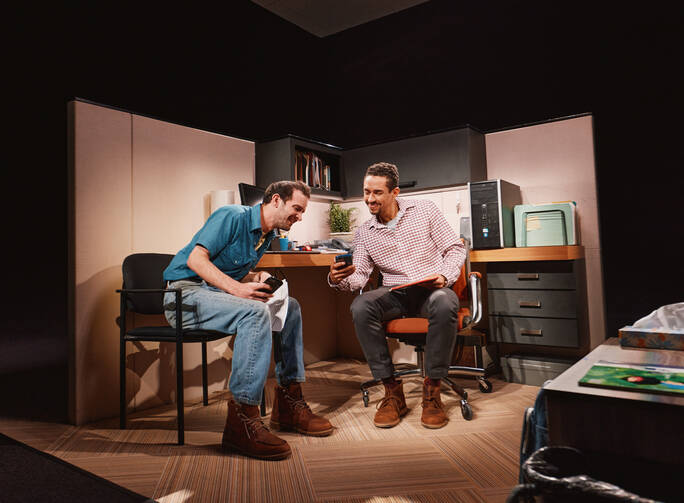 You may have seen the popular internet meme, “Men will literally [insert action] instead of going to therapy.” This lightly ironic roasting of toxic masculinity (some of my personal favorites include “invent Facebook,” “learn everything about ancient Rome” and “be buried with 8,000 terra-cotta soldiers”) kept coming to mind as I watched the two male characters tensely and sometimes warmly banter and bond in Samuel D. Hunter’s sneakily profound new play, “A Case for the Existence of God,” now onstage Off Broadway at the Signature Theatre.

Neither therapy nor religion comes up explicitly in this 90-minute one-act play, but in telling the ostensibly simple story of Keith (Kyle Beltran), a mortgage broker trying to secure a home loan for a factory worker, Ryan (Will Brill), Hunter paints an incisive, often achingly funny picture of the way men use indirection, passive aggression and occasional outright aggression to avoid naming their true feelings and desires. Hard truths eventually do spill out between these two tightly wound men, who have enough common ground on which to build a tentative friendship: Both grew up in the small Idaho town they still live in, and both are single dads of adorable 15-month-old girls. There the similarities end: Ryan is straight, white, working-class and going through a divorce, while Keith is a gay Black man with a fancy degree in early classical music who is fostering to adopt his daughter.

It is ultimately a mix of Ryan’s lack of social polish and Keith’s poorly concealed emotional fragility that begins to break down the walls between them. The bumps in their relationship, and a bit of a breakthrough, emerge near the end of the play’s first scene. Ryan doesn’t understand a word of the financial options Keith lays out and wonders why he can’t just get a loan directly. Then Keith gets a phone call about his daughter that cracks his professional facade, and he unloads a bit on his new acquaintance:

Look, you’re not the first person to realize that the financial system is convoluted. Most of us realize that in college. But you either play by the rules and pretend it all means something, or you don’t get anything. That’s most of what being an adult is. And you just hope that everyone else agrees to keep playing by the rules long enough so you have time to grow old and die.

When, after a short pause, Ryan responds, “I think I’d like to work with you,” it gets a laugh. But this is clearly the beginning of something genuine between them even as the soil for further conflict has also been seeded. By the time Ryan goes further out on a limb by venturing that he and Keith seem to “share a specific kind of sadness,” their bond has become almost brotherly—even though, as with most brothers, it still retains a competitive, mistrustful edge.

Director David Cromer’s production, in which the two actors sit in chairs in a nondescript cubicle for most of the play’s running time, is as sharp and clear as the characters are confused, milking all the tension and release imaginable from this claustrophobic tête-à-tête. And the two actors—Brill, a well-meaning schlub with a permanent five o’clock shadow, and Beltran, a poised tower of gently frayed nerves—are an ideal study in contrasts, as if the play is saying, “If these two can get along, there may be hope for us all.”

Make no mistake: Samuel D. Hunter is hardly parochial in his concerns or narrow in his vision.

What about the play’s grandiose title? To get a sense of what Hunter is up to, it helps to backtrack to his last play. 2019’s “Greater Clements” was a sprawling three-act tragedy set in and around a derelict Idaho mining museum, which, accordingly, plumbed the depths of the American soul in a tale of intergenerational betrayal and disappointment. All of Hunter’s work had led up to that peak, from the Hobby Lobby breakroom of “A Bright New Boise” to the internecine battles of evangelist missionaries in “The Harvest.” And all of his plays have etched distinctive portraits of characters not typically seen in New York theater, or much in any media: small-town folks, most from Idaho, with everyday struggles and desires that both define and confine them.

But make no mistake: Hunter is hardly parochial in his concerns or narrow in his vision. Like August Wilson’s Pittsburgh or Kate Chopin’s Louisiana, Hunter’s small-town Idaho isn’t just finely observed and sensitively rendered; it is also universally resonant. The soulful, roiling inner lives of his characters are no less capacious or compelling for having a regional container. If anything, it is the contrast between their quotidian lives and cosmic yearnings that gives Hunter’s work both its comic flourishes and its gut-punch emotional impact.

That is one reason why, even as he has reduced the scale of his writing from the wide angles of “Greater Clements,” Hunter is no less ambitious or insightful in “A Case for the Existence of God.” It may also explain why a play with that provocation of a title doesn’t take the form of a theological argument. It is instead a kind of case study, a parsing of two particular lives and the lives they touch as embodiments of divine purpose. Or not: There is also a bleak way to read the title, as if it’s saying that the seemingly aimless story of two flawed, thwarted men is the best case there is for God—in other words, no case at all.

But while it is true that Hunter admirably avoids easy comfort or tidy moralizing, there is no mistaking the underlying spiritual thrust of his work. Think of his play, if you will, as a parable. Who else do we know who taught in parables?