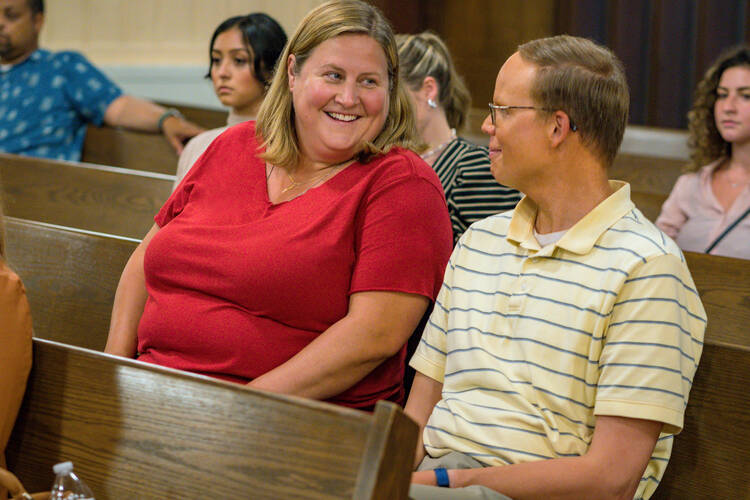 Bridget Everett and Jeff Hiller in “Somebody Somewhere” (HBO Max)

On April Fool’s Day my mom tripped in the garage while carrying something and ended up breaking her nose. And probably both because it was April Fool’s Day and because this is how humor works in my family, she decided to tell me by sending a photo of herself—looking basically like she had just been beaten up—with the text “Hope you’re having a great day!”

It was, um, kind of a lot to take in. But as I sat there processing it, I also found myself thinking, “You know, if I were watching this on a sitcom it would be pretty funny.”

That’s how sitcoms work, right? They draw humor from situations that in real life are kind of a nightmare, like having a terrible boss (“The Office”); working at an inner-city school where there is no money for anything (“Abbott Elementary”); or discovering not only have you died, but you’ve been sent to Hell (“The Good Place”). Part of why we laugh is precisely because we know what some of those things feel like—and probably because we are relieved that it’s not happening to us.

But it’s also a matter of what’s at stake: No matter how bad things might seem in your standard sitcom, you know the characters are going to find some kind of creative solution or clever retort in response to their problems. Even if they end up failing, the implicit contract of every sitcom is that watching this show is not going to ruin your day. Things are somehow going to turn out O.K., and whatever happens, the characters are going to look great doing it.

No matter how bad things might seem in your standard sitcom, you know the characters are going to find some kind of creative solution or clever retort in response to their problems.

Meanwhile, in real life, we think of our witty comebacks or canny negotiation strategies hours later, while in the moment we shout in public and make our kids cry and have stains on our clothes while we do it (and also apparently while writing articles about it).

But watching the new HBO Max series “Somebody Somewhere” made me wonder if that sort of “our life, but safer” approach to the television half-hour comedy is necessary, or even a good thing. The show, which stars comedian Bridget Everett as a kind of aimless and angry single middle-aged woman living in Manhattan, Kan., and Jeff Hiller as the awkwardly sweet gay man who befriends her, is absolute in its refusal to make its characters in any way better than real life. You know that time you stopped at a diner on a family vacation? The cast of “Somebody” is basically everyone you saw there—short and tall, heavier-set and wire-thin, well-dressed and sloppy.

Their lives are just as basic; Sam and Joel work in an office that grades college entrance essays. Sam’s shrewish sister Tricia runs a scented candle and inspirational pillows-type gift shop. Her father is an aging farmer, her mother an active alcoholic, and Sam herself is long stuck in a rut with no real plan for the future.

“Somebody Somewhere” is absolute in its refusal to make its characters in any way better than real life.

There is definitely a version of this premise that could have been standard sitcom fare: the office as a Kansas version of Dunder Mifflin, Sam’s parents a pair of wisecrackers straight out of “Everybody Loves Raymond.” And yet by peeling away all the pounds of make-up and pages of rat-a-tat-tat sitcom chatter that in real life is real annoying, co-creators Hannah Bos and Paul Thureen are able to tell a story that is somehow still delightful even as it is about our humanity as we actually experience it.

Whether they present as quietly decent like Joel, mean like Tricia or harried like Sam, everyone on “Somebody Somewhere” is eventually exposed as fragile, an exposed nerve, in need. And as the series goes on it becomes clear, this is not a matter of circumstance—a bad day, a serious loss. It is who they are, just as it is who we are.

And this is not a bad thing: Joel introduces Sam to “choir practice,” a semi-secret weekly gathering of local people performing for each other in a church hall. Once again the show sticks to real life; there is no a-ha moment where Sam steps to the mic and reveals she is actually a superstar. Even as Joel sells her as one of his favorite singers in the world, her voice is merely fine. But that is the point of both the moment and the show: You don’t have to be a star or a success to be worthy of love or admiration. You also don’t have to get yourself together first, or ever. (Spoiler: Nobody does.) What makes us gorgeous and lovely is the simple fact of who we actually are, messy and vulnerable as that may sometimes be.

That is the point of both the moment and the show: You don’t have to be a star or a success to be worthy of love or admiration.

Each session of choir practice begins with a short sermon from local transgender agriculture professor Fred Rococo (played by the transgender New York theater legend Murray Hill). It’s a genius move on the part of the creators to place Hill in this role of community father figure. No one knows more about the experience of being exposed and open to judgment than this transgender man. His life grants him a level of wisdom and acceptance that the others need.

He and choir practice also provide a kind of welcome many of them can’t find elsewhere. Although “Somebody Somewhere” is not a show about religion, it is in its own way an exploration of what a truly religious community offers—namely, a space of radical acceptance that invites you to take risks and be there for others. “This is church,” Joel yells in the season finale as he, Sam and some others drive around town in a party bus, and their group is indeed exactly the kind of community of love and wonder that many of us go to church hoping for. Forget the burning bush; in “Somewhere,” God is revealed in the little kindnesses we are willing to show to one another.

In a way, my problem with sitcoms is a problem with Hollywood stories in general. As much as they talk about self-empowerment, it is usually at the expense of who we actually are. The hero realizes they actually do have a special skill and are not stuck being ordinary. The same can happen in the church; we are called to “put on Christ,” when in fact God is already in us just as we are.

In the end, we are all just somebody somewhere—messy, fragile, ordinary. But that’s not something to be ashamed of or papered over. It’s the Good News.