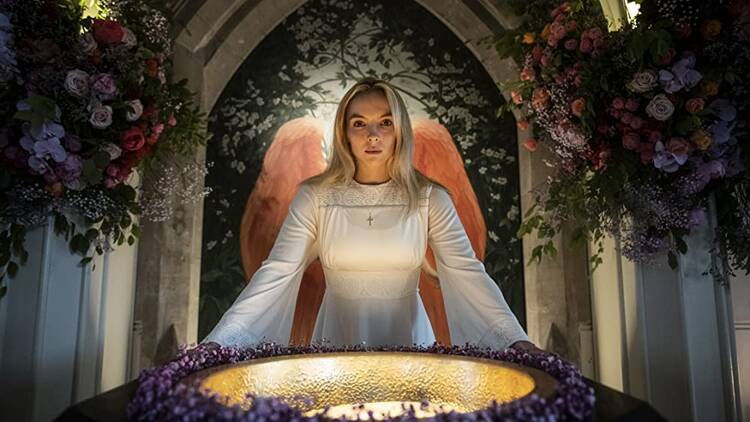 This essay contains spoilers for the final season of “Killing Eve.”

Early in February, I sent an optimistic Slack message to my editor at America. “Final season of ‘Killing Eve’ starts soon. Looks like Villanelle is trying to repent from all of the serial murder. The trailer shows her getting baptized, so should be lots of interesting things to unpack!”

“Killing Eve” is BBC America’s hit lesbian assassin romance crime drama. That sentence is a lot to take in, as is the show; it’s ambitious, campy, violent, fun and unpredictable. For three seasons, the show has been a witty, blood-soaked romp around Europe, with tour-de-force performances from Sandra Oh and Jodie Comer. But a botched Christian conversion narrative and (spoiler alert!) a “bury your gays” ending made Season 4 a deeply disappointing conclusion to to the show.

As much as I adore camp, it is not a good sign if the best part of your conversion narrative is a hallucination of Jesus as a Russian drag queen.

Sandra Oh plays the titular character, Eve, a dissatisfied MI5 agent with an intense interest in female serial killers. Jodie Comer plays Villanelle, a playful yet sadistic and mercurial Russian assassin with a flair for the dramatic. The two fall first into mutual obsession and then in love, stalking, stabbing and seducing each other by turns. After several seasons of cat-and-mouse games and mutual murder attempts, the end of Season 3 sees Eve and Villanelle admitting that they cannot be together. Season 4 opens with Villanelle trying to become a better person to show Eve that she has changed—via being baptized and identifying as a born-again Christian. But despite this opportunity to ask meaningful questions about the nature of sin and forgiveness, the show stumbles badly and the conversion subplot never finds its feet.

“Killing Eve” can only be described as “shock-chic,” with a sultry French soundtrack overlying scenes of incredible, highly stylized violence. The show strikes a very delicate balance between beauty and brutality, with Villanelle committing horrific murders in high couture. Within this balance, even the more violent elements of the show usually feel purposeful in their juxtaposition against the simultaneous glamor of Villanelle’s lifestyle. The unfortunate exceptions are the religious elements of Season 4, which are used largely for provocative shock value.

As much as I adore camp, it is not a good sign if the best part of your conversion narrative is a hallucination of Jesus as a Russian drag queen.

Part of the problem with the religious subplot is its brevity. Despite the season trailer marketing it as a central theme of the season, Villanelle’s encounter with religion largely ends after the second episode. She wants to get baptized to try to win Eve’s love back, not because of any particular spiritual experience. But it does come from a genuine desire to change and an earnest (if short-lived) attempt to stop killing.

The ending is the personification of “bury your gays,” a problematic trope in media where queer characters are treated as more expendable than straight characters.

Bizarrely, the show manages to make it through the baptism plot with no mention of sin or forgiveness, central concepts to any understanding of the power of the sacrament. What would it have meant for somebody to have forgiven Villanelle, or for her to feel that her sins were truly behind her? Could she have made a serious attempt at staying on the straight and narrow? We’ll never know. Villanelle’s conversion attempt is ultimately a failure: She is first idolized and then ostracized by her fellow parishioners, and she leaves the church by seducing the pastor’s daughter and then killing her and her father both.

And I’m not joking about Russian drag queen Jesus. Made in Villanelle’s own image (played again by Jodie Comer, but in a fake beard), it’s provocative but a visual delight. It is also an excellent representation of Villanelle’s attempt at spirituality, which is never really about God, but always about herself and her own desires. She’s not taking direction from Jesus but from herself, dressed up in a bit of glitter to try to disguise herself from her own recognition. Deeply in character for her, it is, briefly, the best part of the conversion subplot before it too falls into shock value (cue Villanelle murdering drag queen Jesus. Eyeroll.)

When the show tires of religion, it takes a quick detour into questions of biological determinism—was Villanelle born a serial killer?—that are never satisfyingly resolved, nor indeed ever revisited. So much of what the season tries to accomplish is foiled by its ending. A large part of why the show never convincingly explores whether Villanelle can change is because it kills her off at the end without any resolution to her moral arc, perhaps the most egregious offense of the season.

A consistent plot of “Killing Eve” has been Villanelle and Eve trying to find and kill the mysterious Twelve, an international organization that trains assassins. In the last episode, Villanelle and Eve finally track the Twelve to a yacht. To sneak onto the boat, Eve pretends to be a pastor and officiates a gay wedding. Though directed at the wedding party, Eve’s heartfelt speech about love feels like a wedding vow to Villanelle, sitting in the back row. While Eve dances at the reception, Villanelle kills the bad guys, and they reunite on deck. Their goal achieved, all obstacles removed, Eve and Villanelle can finally be together in peace. They embrace. And then, while holding Eve, Villanelle is shot in the back by an off-screen sniper.

It’s the personification of “bury your gays,” a problematic trope in media where queer characters are treated as more expendable than straight characters, even if they are one of the major figures in the show. This is not to say that queer women characters cannot or should never die. The reality of queer stories, like all stories, is that some do end in tragedy, and that tragedy deserves to be (tastefully) told. But there is a deeply damaging trend in media where a same-sex relationship will be confirmed between characters shortly before one of them dies.

It creates an unsubtle effect where women who dare to love other women are immediately narratively punished with death. The homophobic implications are clear, as is the damage this wreaks on queer women in the audience, who are shown time and again that they do not get happily-ever-afters. Although the plots of the “Killing Eve” show and the book series it was based on are wildly divergent, for reference, the book series ends with Villanelle and Eve living together happily in an apartment in St. Petersburg. To kill Villanelle instead of having her live out her relationship with Eve was a deliberate change made by the showrunner.

In a show about assassins, it is not surprising that either Villanelle or Eve would die at the end; both have survived their fair share of murder attempts. But foreshadowing throughout the season—references to the parable of the scorpion and the frog, ominous tarot cards—indicated that Villanelle and Eve would kill or die for each other.

With the homophobia baked into the show’s ending, I suppose, in a way, they did. Had Villanelle and Eve not been in a relationship, would Villanelle have been killed by an off-screen sniper shot in the last two minutes before the final credits rolled? It’s not likely. That’s not how you treat main characters.

The character, the actor and the show all deserved better. So did the Christian conversion subplot. And come to think of it, so did every queer person in the audience.