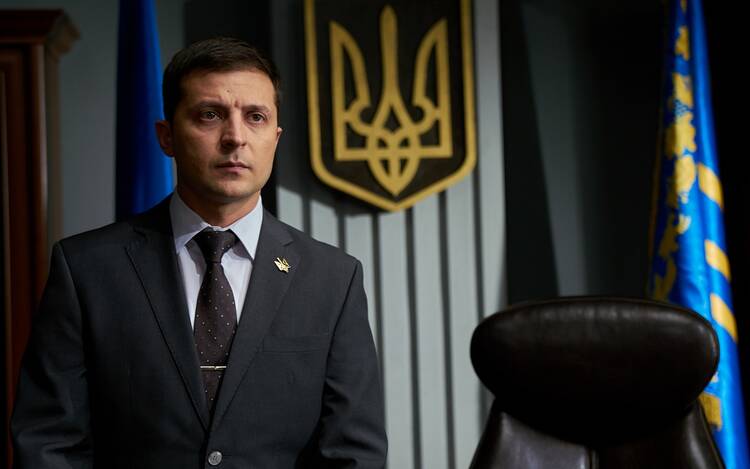 Volodymyr Zelensky in ‘Servant of the People’ (Kvartal 95)

In Kyiv, there is a footbridge that glides over the Dnieper River. Built in 1957, the Parkovy (a.k.a. Park) Pedestrian Bridge connects Kyiv’s city center to Trukhaniv Island, a forested area filled with recreation areas, beaches and resorts. The suspension bridge is just 400 meters long, less than 15 percent of the length of the Golden Gate Bridge in San Francisco. Each night, lights cast upon it paint the river in pretty colors.

I’ve never been to Kyiv. But still I keep seeing reds and blues and greens dancing across the bridge’s girders in my mind, after catching it in the background of an episode of the Ukrainian TV show “Servant of the People.”

Watching “Servant,” what’s most clear is Volodymyr Zelensky’s love for Ukraine and democracy.

Whether you know it or not, you have heard about “Servant”; it’s the 2015-2018 TV show created by now-Ukrainian President Volodymyr Zelensky, in which he starred as a high school teacher who is unexpectedly made president of Ukraine after a video of him ranting about governmental corruption goes viral. “Who is there to vote for?” he shouts at a friend after his students are forced to assemble voting booths. “These s—tsticks enter government, and they loot and talk s—t, talk more s—t and swindle. Same s—t, different day. No one gives a s—t!” Netflix recently released the first season in the United States; other seasons can be found on YouTube.

Much has been made in the States of the seeming incongruity of a comedian becoming a country’s president. Yet watching “Servant,” what’s most clear is Zelensky’s love for Ukraine and democracy. Out of moments of delightfully Chaplinesque innocence, like his President Vasyl Petrovych Holoborodko being trained on how to deliver his inaugural address with walnuts in his mouth, emerge passionate speeches confronting legislators, his cabinet, even his loved ones, with their own corruption. “Here I am battling those vampires,” he tells his family after he discovers they have been using his election to get cool stuff for themselves, “and at home I get the same foul soup, just reheated.”

And yet where he is now? It’s the question that haunts me as I watch the show.

At times figures from world political history suddenly appear to help Holoborodko: Plutarch and Herodotus sit in his bed debating the proper form of government while he sleeps; Che Guevara screams out the crimes that have been committed by each member of the cabinet. In one particularly affecting sequence, Abraham Lincoln urges Holoborodko to fight. “You could also free your people,” Lincoln says. “But we don’t have slavery,” Holoborodko wonders.

Lincoln replies: “Do you think that millions of Ukrainians who bust their backs working to the bone just to feed the so-called elite, their houses, limousines and mansions, aren’t slaves?”

Watching “Servant of the People,” I find myself called to gratitude, hope and mourning.

Even as the situation Zelensky depicts is in some ways quite specific to Ukraine—faceless Russian oligarchs lurk in the background throughout the series, plotting out how to control him—his yearning for a political system more just and responsive to its people resonates deeply. He is very much like the Park Bridge, not terribly fancy and yet beautiful to behold.

And yet where he is now? It’s the question that haunts me as I watch the show. Where is Zelensky holing up? What is the status of Viktor Saraykin, who plays his jowly, Homer Simpson-esque father Petro, or Nataliya Sumskaya, who plays his quietly loving mother Mariya? Where is Stanislav Boklan, who steals so many scenes as Holoborodko’s smooth-as-silk frenemy Prime Minister Yuriy Ivanovich Chuiko? The high school history students who call him to his best self—are they O.K.? Are their families?

I like to think of television as an invitation into a spiritual experience. There are the characters we can’t get enough of, the plot twists that move us and draw out our own deeper questions and desires. Sometimes simply being in another world becomes a doorway into contemplation.

The opening credits for “Servant” are very much like that: Holoborodko bicycles through Kyiv on a sunny, blue-skied morning. He is dressed in a suit and heading to work. And along the way we see many different glimpses of Kyiv: a statue of a girl releasing pigeons; a massive mural of a man with a reindeer; long wooded lanes and downtown streets reminiscent of Paris or Melbourne; the river and its bridges. And the people of Kyiv, too—mothers with children, friends goofing around, an older couple arm in arm. It’s a vision of the Ukraine that Holoborodko is fighting for, and Zelensky too. It’s a vision of the kingdom, really—ordinary, peaceful, lovely.

But right now it is impossible not to see that sequence as a window into a Ukraine that is being destroyed before our eyes. Russian missiles have not yet hit the Park Pedestrian Bridge. Perhaps some nights it still casts shimmering bars of yellow and blue upon the water. But for how much longer? Watching “Servant of the People,” I find myself called to gratitude, hope and mourning.