The Catholic Church should do Super Bowl commercials 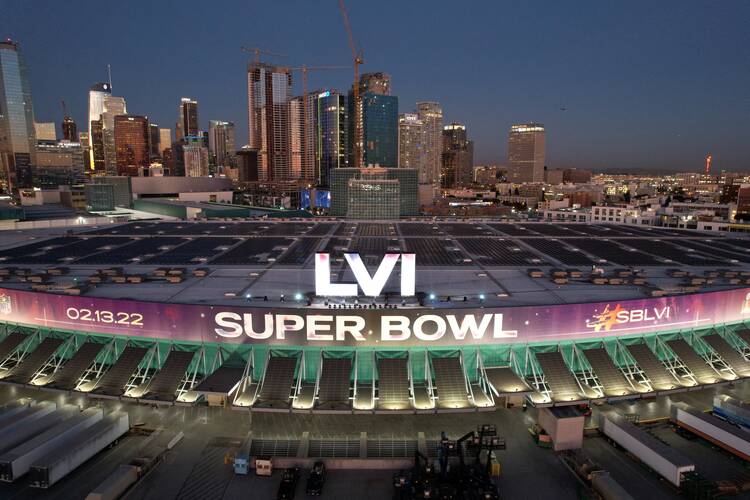 Super Bowl Sunday often has the biggest audience in all of television. It’s an opportunity like no other to get your product out there; some of its ads will be talked about for days, weeks, even months.

So why doesn’t the Catholic Church ever use it (other than on “The Simpsons”)? We represent almost a quarter of Americans in this country, and we’ve got some great things to offer. Why aren’t we out there?

Madison Avenue, I know you’ve got some Catholics among you. Imagine what we could do together:

Pope Francis stands before the camera, smiling, holding a phone. Slowly he begins to read tweets about him from American Catholics, each meaner than the last. Some are even from priests and bishops.

Super Bowl Sunday is an opportunity like no other to get your product out there. So why doesn’t the Catholic Church ever use it (other than on “The Simpsons”)?

Francis offers little quips and smiles, actually appreciating the wit of some of them, joking that someone maybe needs a little more sleep (or work).

Narrator: Whatever happened to love your neighbor?

Francis: “Who am I to judge, but that guy’s the worst.”

We open on a large white space. People start to walk in from left and right. They smile, nod, chat a bit.

Slowly, they all stop talking and start looking around, as though trying to figure out what exactly they’re doing here. It gets more and more uncomfortable.

Narrator: Trying to figure out what the Synod is?

Onscreen, a pause as things get even more uncomfortable.

Suddenly, Jesus walks out, holding a picnic basket. Everyone stares at him, and he at them.

Narrator: Think of it like a picnic after the pandemic. It’s a chance to catch up and talk about life.

Jesus pulls out a noise maker and blows it. It breaks the ice. People laugh. Some go get chairs and tables, picnic blankets. Jesus says he brought his mom’s favorite hot dish. Someone pulls the tin foil off a casserole.

Paul Rudd and Zendaya are in a church. That’s it. That’s the advertisement. I don’t care what they’re doing. They can tap dance down the aisle or lay on the floor and look up at the stained glass. They can sit in the confessional and play Two Truths and a Lie. They can just stare at the camera. You can have them doing all that and have what I just wrote as a voiceover. I don’t care, just put them in a church.

Paul Rudd and Zendaya are in a church. That’s it. That’s the advertisement.

Narrator: Hey, Paul Rudd and Zendaya are hanging out in a church. Why aren’t you?

(We’re trying to get people in the pews here.)

Pope Francis arrives at his office. An aide standing at the far door asks if he’s ready. Francis nods.

The aide opens the door and in comes a series of ever-crazier groups. There are clowns, bagpipers, a fourth grade class that seems to be a thousand kids. At one point a guy dressed as Spider-Man shows up. After shaking the pope’s hand he pulls off his mask to reveal he’s actor Andrew Garfield, who then delivers a Catholic version of the speech he gave after doing the same thing at Comic-Con. “Who is he?” Pope Francis asks an aide in Italian as he goes on. The aide shrugs.

It’s every hilarious and crazy photo we’ve ever seen of the pope and him being asked to do every crazy thing, too.

Basically it’s every hilarious and crazy photo we’ve ever seen of the pope and him being asked to do every crazy thing, too—wear the clown nose; blow the bagpipes, which he can’t make work, but the bagpipers won’t let him stop; kids keep charging into his legs. Francis is a great sport, but we can see it wearing on him.

Finally, the audience is over and falls back in his chair, exhausted.

A knock at the door. Francis’ face falls. He stands and tells them to come in. It is the teacher who was herding all the kids.

Teacher: Pope Francis, I’m sorry, I know you must be exhausted, but I just wondered.... It’s been a long time since I went to confession, a really long time, and... [She’s clearly emotional.] I don’t know, I just felt so safe with you.”

Touched, Francis sits down on a couch in the room and taps for her to sit beside him. As she begins it is clear that this is deeply meaningful for him, too.

Narrator: Sacrifice really is its own reward.

Suddenly the kids start pouring back in. So does everyone else. The Scotsmen are playing the bagpipes; the children are using the pope’s zucchetto as a frisbee. The aide is chasing them. Francis—wearing a huge clown wig—watches, smiling. A child charges into his legs again.

Narrator: That’s not to say it’s not also a sacrifice, but still.

Your Very Own Personal Assistant

A nun opens a box to show it filled with empty bottles of Communion wine.

She walks out of the room, busy about many things.

Alexa: O.K., I have ordered 60 copies of the alien abduction novel ‘Communion,’ by Whitley Strieber.

The nun comes back, wondering, “Wait what?”

A priest throws himself down on his couch, pulls out his tab collar.

Priest: Hey Siri, play something by the St. Louis Jesuits.

Siri: I’m not sure I understand. Try again.

Suddenly “The Trolley Song” from “Meet Me in St. Louis” blasts throughout the room.

A girl in a Catholic school outfit surrounded by thick tomes works on a paper. “Cortana, what is transubstantiation?”

Cortana gives a definition that is as complicated as everything she’s been reading elsewhere.

Narrator: Personal assistants are good for a lot of things, but not everything.

As we watch, the girl desperately tries to keep up writing everything that Cortana is saying about transubstantiation.

Narrator: But there’s someone else out there waiting to help us.

A kid kneels beside her bed with a parent. The parent asks, “What do you want to tell God today?” The kid begins a litany of all the things he wants God to know about her day, and also: Could God take care of her Grandma Norman and her Grandma Marion?

Narrator: Sometimes God even hears the prayers we haven’t said out loud.

Cut back to the priest who got “Meet Me in St. Louis,” now singing the song along with three other priests, all at the top of their lungs.