Christmas pageants and school plays are back. Thank God. 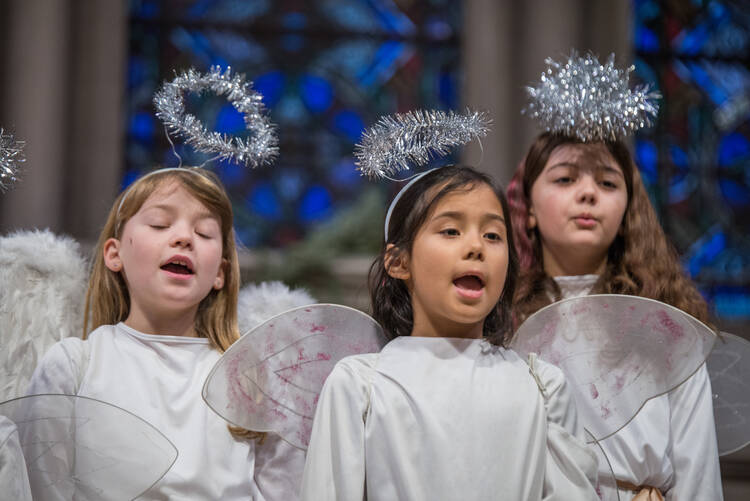 A few weeks ago, two friends took me to see Donovan Catholic High School’s performance of “42nd Street” in Toms River, N.J. It has been a long time since I saw a high school show—and it had been a long time for everyone else there, too. Just weeks before the school was set to open “42nd Street” in April 2020, the pandemic shut it down. With all the surges and safety requirements that followed, there had been no chance to put it on until now, more than 18 months later. And based on the spontaneous applause that would erupt after just about every scene (and often giddy shrieks, too), I’d say everyone really loved it.

First produced in 1980, “42nd Street” tells the story of Peggy Sawyer, a fresh-faced kid from Allentown, Pa., who comes to New York to be a chorus girl and ends up in the middle of everything in an about-to-open show. While it is a favorite of schools, the dancing required is formidable, particularly when you’re also intent on meeting the needs of all the students who have been longing to perform in public for over a year. Hell truly hath no fury like a theater kid without an entrance.

Hell truly hath no fury like a theater kid without an entrance.

The Donovan Catholic cast was over 40 people, led by Analise Piemonte as Peggy and Kaelin McManimon as Dorothy Brock, the show’s demanding diva. Piemonte sparkled like a young Anna Kendrick, McManimon sang with the smoky quality of a Kathleen Turner, dozens of talented young women tapped their hearts out and a dozen freshmen boys pretended to be old enough to wear men’s suits. It was delightful.

We are now in the season of fall plays and Christmas concerts. In the past, it’s been something of an endurance test, hasn’t it? While there is a certain practicality in having just one pageant for a whole school, waiting three hours just to see my niece sing “Rudolph the Red-Nosed Reindeer” with her class should go down as one of the labors of Hercules.

But maybe it is different this year. Not that the shows, pageants and concerts are going to take any less time. And there is still a good chance that you will show up to discover that your kid has been relegated to the very rear of the Nativity scene. But there really is such relief in being able to sit in an auditorium on metal fold-up chairs all night watching your son or your nephew grin as he sings his heart out, even if he doesn’t know an F sharp from a middle C.

So who cares if the mics suddenly cut out or the lights mysteriously won’t go on during the curtain call? These are the kinds of surprises that these kids have spent the last two years waiting for.

Watching “42nd Street,” I could see it on the performers’ faces, too, that sense of finally being out in the world where they belong. In the end, we are all a bit like plants in a pot—we can only grow as big as the containers we are afforded. So who cares if the mics suddenly cut out or the lights mysteriously won’t go on during the curtain call? These are the kinds of surprises that these kids have spent the last two years waiting for.

At intermission, the show’s director, Ron Heitmann, who also teaches English and social studies at Donovan High School, talked about the strange journey of this show. “It was the longest rehearsal in history!” he exclaimed.

Then he started to talk about all the students that had graduated out of the production before they could get a chance to do a single drop right shuffle hop ball change left. The thought of them made him so emotional he had to stop for a moment. Then he revealed that all the suitcases in the scene where the cast travels to Boston for its out-of-town tryout bore the names of the students who never got to perform. And then we were all emotional.

We spent over a year locked away from each other, and these days I am constantly having to remind myself that no, it wasn’t just a couple months.

I find one of the strangest things about being alive is our capacity to forget pain. You can have appendicitis one week, feel like you’re being stabbed repeatedly without possibility of escape, and a week after surgery it’s not even a thought in your mind. We spent over a year locked away from each other, and these days I am constantly having to remind myself that no, it wasn’t just a couple months.

I was reminded of that again as the cast poured from the stage after the curtain call, eager to be surrounded by their friends and family. No doubt they would be spending the hours to come with one another once again, telling the stories of the funny things that happened that only they could possibly understand. But for the moment, they were content to bask in the glow of their achievement. And we were, too, just like any other year.

On the way home, my friends drove past a house that had already put up all its Christmas lights. At the time it was the only home on the block with any decorations up yet, and it was kind of a visual nightmare: strings of white and colored lights and a dozen characters from different holiday traditions all mixed together. “Isn’t it great?” my friend said.

And you know what? After two years without winter shows, proud parents and time spent driving around admiring lights with friends, it really was.