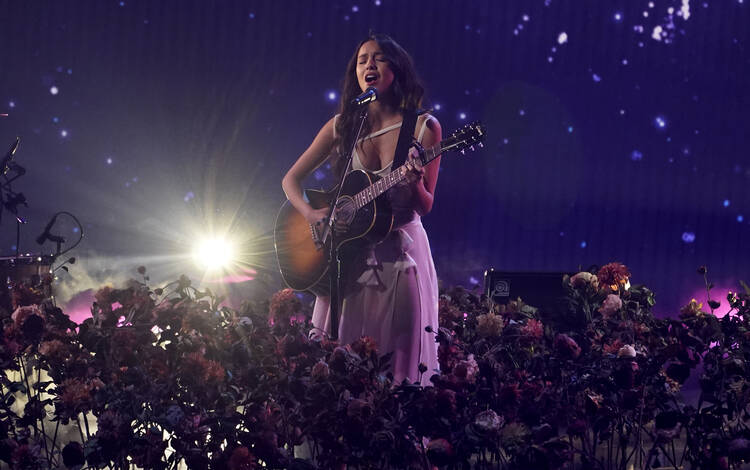 Olivia Rodrigo dominated the music scene in 2021. Her piano-driven “Driver’s License” and the rock-inspired “Good 4 U” both hit number one on national and international music charts. While best known for her young love heartbreak anthems, her debut studio album “Sour” also wrestles with weightier themes, winning her both critical acclaim and a rabid young fan base.

I was initially drawn to the aesthetics of Rodrigo’s music as a seamless blend of Taylor Swift, Billie Eilish and Hayley Williams, but soon found that her lyrics cover many of the same topics I discuss with my Catholic high school students. As a church that infamously struggles to reach and retain young people, we Catholics have something to learn from Ms. Rodrigo.

In the album’s opening track, “Brutal,” she laments how her teenage years have not lived up to the happy-go-lucky stereotype often portrayed in popular media.“I’m so sick of seventeen/ Where’s my [expletive] teenage dream?/ If someone tells me one more time/ ‘Enjoy your youth!’ I’m gonna cry,” she sings. Referencing the Katy Perry song “Teenage Dream,” Rodrigo signals she is a different kind of pop star—one who understands what it’s like to feel life passing you by. She relates feeling like, “I’m not cool, and I’m not smart, and I can’t even parallel park.” For Gen Z, which USA Today has called “The Loneliest Generation,” Rodrigo’s disillusionment resonates.

On several occasions, I have had students tell me something similar along the lines of, “Mr. Tenney, I’m jealous of your high school stories. We just watch Netflix on the weekends.” What if our church, like Rodrigo, found ways to verbalize and validate the emotional experiences of youth? Moreover, what if our church better prioritized opportunities for young people to have meaningful fellowship and mentorship? Young people yearn for deep relationships beyond social media and they need help learning how to build it.

What if our church, like Rodrigo, found ways to verbalize and validate the emotional experiences of youth?

Speaking of social media, in “Jealousy, Jealousy,” Rodrigo details her self-destructive thoughts while browsing her phone: “And I see everyone getting all the things I want/ I’m happy for them, but then again I’m not/ Just cool vintage clothes and vacation photos/ I can’t stand it, oh, God, I sound crazy.” Most of us can relate. Who hasn’t felt a twinge of envy and insecurity when happening upon the carefully curated feed of a friend or influencer portraying a perfectly filtered life?

Those of us who had religious education classes growing up may remember learning the commandment to not “covet thy neighbor’s belongings” and that envy is one of the seven deadly sins. Yet we still mindlessly scroll, comparing ourselves to those who have the things, looks and lifestyles that we think we want. This breeds resentment and self-loathing in our hearts, especially for those who are less emotionally secure. Rodrigo articulates why and how our social media-fueled envy can be deadly: to our self-understanding, to our relationships, to our mental health.

Rodrigo also adopts a semi-prophetic voice in “Hope Ur Ok,” in which she tells the story of a boy whose abusive parents “cared more about the Bible than being good to their own child/ He wore long sleeves ’cause of his dad.”Having spent my entire adult life working in ministry, I can attest that this cautionary tale is all too common in our parishes, families and schools.

Like a modern day Qoheleth from the book of Ecclesiastes, Olivia Rodrigo looks at the preoccupations of her world and cries “vanity!” In doing so, she is pointing her listeners towards something more eternal.

This song reminds me of a student who came to visit me in my classroom one morning a few years ago. He frequently stopped by, usually to debate some political or ethical issue. Several times we even discussed the church’s teaching on sexuality and marriage, on which we disagreed but understood each other. But that morning he caught me off guard when he said, “Mr. Tenney, if the crowds ever come for me as a gay man, just make sure they hang me with a Michael Kors belt.”

I had suspected that he was gay, but he had never never spoken to me about it so openly. I looked at him and said, “If they come for you, they’ll have to hang me first.” He ran over and squeezed my hand.

As his religion teacher, I felt honored that he would share this with me, especially given our disagreement over sexual ethics. At the same time, I was horrified this young man was so scared of Christians that he thought some were a physical threat to him.

I have mostly lost touch with him after he graduated, but if he reads this, I want him to know in the words of Rodrigo’s lyrics: “I love you, and I hope you’re okay.”

Rodrigo names God more than a dozen times on the album. Some mentions are clearly meant in exasperation and not as prayers, but sometimes she blurs that line: “God, I don’t even know where to start”; “God, I’m so blue”; “God, it’s brutal out here”; “God, I wish I could do that.”

Rodrigo names God more than a dozen times on the album. Some mentions are clearly meant in exasperation and not as prayers, but sometimes she blurs that line.

These lines resonate with me because I too have gone through painful times where I have cried out “GOD!” and it’s not clear, even to myself, if I am cursing or praying. I have also found in even my non-religious students a general sense of the transcendent and a desire to call out to...something? Someone? The universe? This spiritual restlessness is fertile ground for developing an interior life. As St. Augustine famously wrote, “Our hearts are restless until they rest in you, O God.”

When I listen to Rodrigo’s music, I marvel at the wisdom of this young woman. She reminds me that I will not find happiness or inner peace by acquiring the right stuff, the right look, the right relationship or by having enough adventures. She reminds me of so many young people I have been privileged to walk with through the years: hurting, struggling, searching and desperately wanting something more substantial than the idols of the American dream to believe in. Rodrigo highlights the emptiness of a materialistic, individualistic world.

Like a modern day Qoheleth from the book of Ecclesiastes, she looks at the preoccupations of her world and cries “vanity!” In doing so, she is pointing her listeners towards something more eternal. 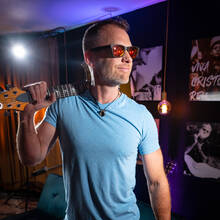 Mike Tenney is the host of Pop Culture Catechism, a podcast about finding God in the music and movies we love. He spent over a decade teaching Catholic high school theology by day and trying to make it big as a rockstar by night. Now he’s a speaker and musician for ministry events.

@PkMikeyT
Show Comments ()
Join the conversation: Login or create an account
Before you can comment, you need to update your profile to include your first and last name, as required in our comments policy. Then reload this page and you'll be set up for commenting. Update your profile