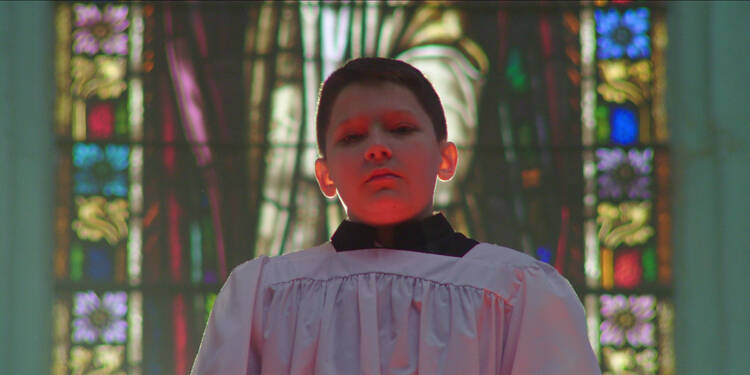 It is barely more than a gesture, but one of the more striking moments in “Procession,” the director Robert Greene’s disquieting “making of” movie, occurs when Kansas City lawyer Rebecca Randles opens her garage door and all one can see inside are file boxes, dozens upon dozens, all relating to the approximately 400 cases she has handled since 1992. They all concern child sex abuse by Catholic priests.

Sometimes images are more effective than words. “Procession” puts that to the test.

This is not a movie about crime and punishment, but damage and recovery.

An experimental film about an experiment, “Procession” could also be called “Six Angry Men”—the half-dozen alleged victims of priestly abuse who, in collaboration with director Greene and drama therapist Monica Phinney, use theater and role-playing to come to terms with their suffering. It was after a 2018 press conference, itself a response to the just-completed and eye-opening grand jury investigation into Pennsylvania clergy sex abuse, that Greene and his producers (Susan Bedusa, Bennett Elliott and Douglas Tirola) approached Randles and her clients about making a film. It would be about using art to treat trauma and, perhaps, turning trauma into art.

The men involved—Joe Eldred, Mike Foreman, Ed Gavagan, Dan Laurine, Michael Sandridge and Tom Viviano—have very similar stories of having been groomed and abused by pedophile priests who were then protected, transferred or simply allowed to perpetrate additional crimes after allegations were made. That the men, some now in their 60s, would choose to cooperate with such a project—one that required them to translate their own stories into mini-screenplays and sometimes relied on them to play the abusing priests themselves—is a testimony to the degree of anger that continues to burn within them. It’s not easy to watch. It isn’t meant to be.

“Procession” is a film that makes you think. It certainly doesn’t make you comfortable.

From a journalistic standpoint, Greene defies a basic rule; none of the priests portrayed (at least one of whom is a fugitive, while others have died) has been convicted in a court of law, and yet are referred to throughout as guilty men. That this seems improper is not to question their guilt—or, heaven forbid, question the credibility of victims whose stories have been dismissed since they were children. But the ethics of documentary filmmaking, like the law, requires a presumption of innocence, at least before conviction. Of course, the fact that the accused have largely evaded prosecution over the years—abetted by the church itself, the victims would be quick to point out—makes such a standard elusive. Still, this is not a movie about crime and punishment, but damage and recovery.

To that end, what we get to see are reenactments of pivotal points in each man’s life brought to the “stage”—which may be an altar, a sacristy, a bedroom or a lakefront cottage. Mike Foreman is the most overtly furious of the six victims, and his unceasing vulgarity renders him inarticulate, but at least he is honest. He reimagines his meeting of six years previous with an independent review board, a session that dissolves into recriminations and profanity. It is unclear whether the meeting actually ended that way or that is the way Foreman wanted it to end. But it is cathartic for him nonetheless.

What makes both the six men and the viewer uneasy, or uneasier, is the enlistment of the very young actor Terrick Trobough to play each of the victims as a boy, a collective character onto whom the shared experience of the men is cast. He is a remarkably mature child, one far more comfortable with the subject matter than his playwrights expect him to be. But what troubles them probably isn’t just his youth, but the way he inhabits their historical space. In recreating their stories, the men accomplish things that are breathtaking in their frankness and, in collaboration with Greene’s direction, in the artistic vision they display in translating grief (for their childhoods, for their church) into something eloquent, even transcendent. “Procession” is a film that makes you think. It certainly doesn’t make you comfortable.