Christmas episode of ‘The Chosen’ to hit theaters in December 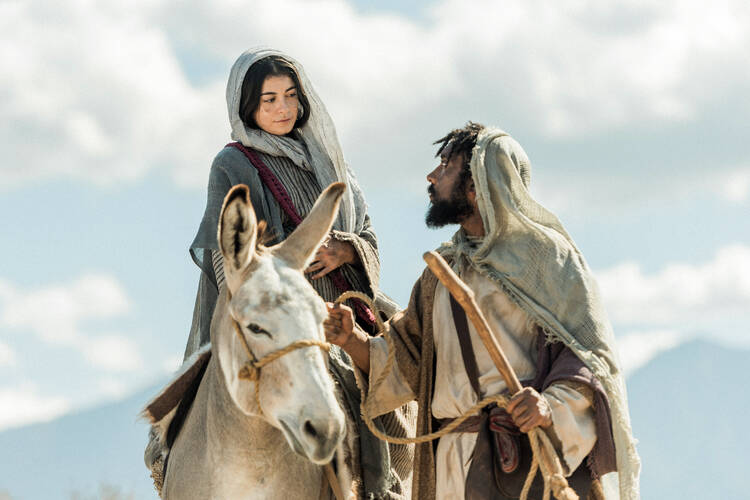 A scene from ‘Christmas with the Chosen: The Messengers.’ (Photo © AAPROPHOTO)

(RNS) — A new bonus episode of “The Chosen” will hit theaters on Dec. 1, delighting millions of fans eagerly awaiting the show’s third season. The special will tell the story of Jesus’ birth through the eyes of Mary and Joseph and will also feature performances by Christian artists Phil Wickham, Maverick City Music, For King & Country and others.

“Christmas With the Chosen: The Messengers” is a direct-to-theaters episode shot entirely in secret and will have a 10-day run before becoming available to stream on The Chosen app.D

The director and creator Dallas Jenkins speaks about why this fresh take on the Christmas story might be especially needed now.

“The Chosen,” a series on the life of Jesus Christ available free via the app, has become a global phenomenon since its release in 2019, with more than 300 million views in over 190 countries. This year’s Christmas special marks the first time the crowdfunded show will be seen in cinemas. The special sold $1.5 million in sales in the first 12 hours, shattering Fathom Events presale records and prompting the distributor to add more than 450 additional viewing locations to help meet demand.

Religion News Service spoke with director and creator Dallas Jenkins about why this fresh take on the Christmas story might be especially needed now. This interview has been edited for length and clarity.

What are you hoping to accomplish by showing "The Chosen" on the big screen?

We thought it could be an interesting way to gather “Chosen” fans together and could potentially generate income before we bring it out as livestream free on the app. All the pay-it-forward money goes toward future seasons. We’re hoping to communicate a fresh perspective on the birth of Christ that we haven’t seen before. By doing it in theaters, we’re really hoping people have an opportunity to gather for Christmas when they haven’t been able to for a long time. Perhaps watching “The Chosen” together and experiencing the message together will be even more inspiring, joyful and impactful.

“The Chosen” has certainly had success in terms of numbers. What about the spiritual impact of the show?

I think the single most impactful thing for me has been what we hear every day, and that's that “The Chosen” is drawing people to Christ in a way they haven’t been drawn before. It’s making them love the Bible, prayer and Jesus more. It’s not a replacement for Scripture or for a relationship with Christ. It is drawing viewers more passionately into those things. God is clearly doing something transcendent that's much bigger and better than I'm capable of.

What do we know about the audience — do they tend to be predominantly Christian?

The viewers as of this moment are mostly Christian, although over half of our cast and crew are agnostic or not of a particular faith background. And we’re hearing every day from thousands of people who are agnostic, atheist or coming at it from another perspective who are just watching it as a normal show. Within the Christian tradition, I would say it’s primarily evangelical but it’s also exploding right now among Catholic and LDS faiths.

Why collaborate with Christian musicians to help tell the Christmas story?

For us, it's an opportunity to take you one step further after you watch the show. The show isn't the end game, the show will hopefully make you love and know Jesus more. But what's your response to that? Well, your response to that, hopefully, is to worship. And all these great Christmas songs will hopefully pour out of you after you experience the Nativity story in a new and fresh way. And so it's just part of our whole mission, to get people together who are great artists and can celebrate the life of Jesus.

What’s the significance behind the title "The Messengers"?

In this brand-new episode, Mary and Joseph are talking about the visits they got from angels. Back then, they referred to angels as messengers. Along with all the musicians doing this special and all the songs they are singing, one of the key messages of the whole special is, we are the messengers now. It’s on us to deliver the same news the angels delivered to the shepherds.

How does working with folks from a range of religious backgrounds influence the show’s content?

How have these different faith perspectives shaped the telling of the Christmas story in this special?

When I discussed this episode with Father David Guffey, who consults with us, he said there are segments of the Catholic Church who believe Mary had no pain in childbirth, although it’s not official Catholic doctrine. That’s something on which I would disagree. So I portray Mary as having pain in childbirth and I portray her having a lot of fear as she's approaching the birth. We make it a normal birth that a teenager and a young man would be experiencing by themselves in a stable. We now know, going into it, there will be a relatively small, but measurable, part of our audience that is going to be upset by that.

Why might this Christmas special be especially needed now?

I think there are people who are really desperate for hope, for a reminder of the fact that some of the struggles and divisions we face today were faced 2,000 years ago. That’s what Jesus came into.

We have a moment in the episode where Joseph scoops up a pile of manure to make room for Mary to give birth. That contrast between the raw humanity of his arrival, and the joyous Christmas songs like “Joy to the World,” is the essence of the Christian faith. And it’s a message that, right now, amid so much division, is essential. We need to remember the birth of Christ transcends everything else we’re dealing with. Jesus didn’t come and change all the struggles people were having; he immersed himself in them.

Kathryn Post – Religion News Service
Provide feedback on this article
Join the conversation: Login or create an account
Before you can comment, you need to update your profile to include your first and last name, as required in our comments policy. Then reload this page and you'll be set up for commenting. Update your profile