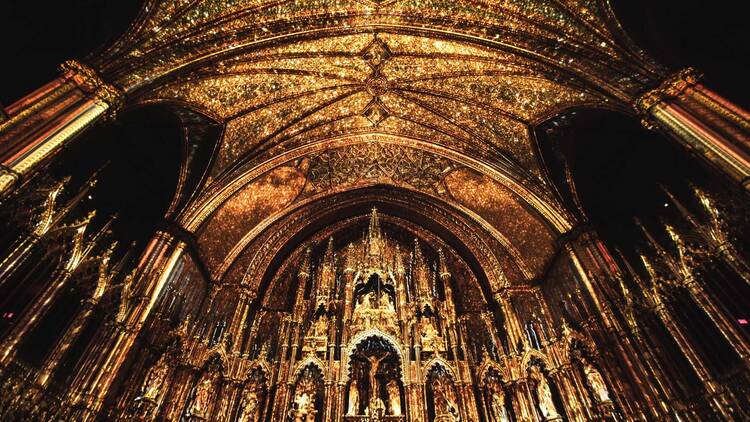 Sitting on a hill above the city of St. Paul, Minn., the copper dome and steeple of the magnificent Cathedral of Saint Paul are visible for miles. The church stands as a living testimony to the history of French-Canadians who settled the area in the 19th century and the continued growth of Minnesota’s Catholic population in the 20th century. It receives 200,000 visitors each year.

At the front exterior of the cathedral, French renaissance and classical themes are embodied in towering arches, pillars and steel domes. The granite outside walls are filled with powerful and moving carvings and statues of Jesus Christ, angels and words from both Scripture and the saints. Above the main entrance is a portrayal of Christ exhorting his apostles to go and preach to the nations, with the disciples looking up at the Lord with awe. Viewed from above, the cathedral has the shape of a Greek cross with arms of nearly equal length.

Non-Catholics may not understand the theology and faith behind the beautiful interior of the Saint Paul cathedral.

The cathedral’s true beauty, though, lies within its interior. Stained glass surrounds marble statues of Sts. Thérèse, Cyril and Methodius, Boniface, Patrick, John the Baptist, Anthony and other saints. The beauty of the colored glass highlights and parallels the saints’ virtues, works and holiness. Elegant blues tower over the interior of the cathedral, whites with yellow are used to represent the gates of heaven and divinity, and the red of grapes symbolizes the blood of Christ.

Other stained glass windows depict scenes from the New Testament, including the Nativity and the Last Supper. Plaques of the Stations of the Cross also circle the interior of the cathedral, while virtues like justice, fortitude and temperance are inscribed just below the cathedral dome. Everything in the cathedral exhibits the life that moves through Jesus Christ in a colorful and awe-inspiring way.

For those who are not Catholic, however, it may prove difficult to understand the faith, culture and, ultimately, the God behind the beauty within the cathedral. More than 4,000 years of faith and tradition have coalesced into these works of art. Catching their references and deeper meaning could be a challenge for those lacking the spiritual and historical knowledge of Catholicism. Additionally, a church that is viewed by some with suspicion and even scorn would be a natural barrier to anyone who might otherwise be inclined to learn more about the world behind these works.

How do Catholics present in a vital way the Catholic faith culture to a secular audience?

Bringing faith to a secular audience
This is a persistent problem for the church: presenting in a vital and relatable way Catholic culture and faith to a secular audience. One answer to this perennial struggle may have arrived in the light show AURA, a stunning production by The Moment Factory at the Basilica of Notre-Dame in Montreal. Opening in 2017, it drew 650,000 attendees from 137 countries from 2017 until Covid shut it down in March of 2020. (The display re-opened this August.) AURA illustrates the beauty of the Catholic faith animating the artworks and aesthetics of a particular church building. An exhibition of this type could easily be created in other cathedrals and basilicas across the country, including the already aesthetically pleasing Cathedral of Saint Paul. The witness and evangelizing value of shows like these would be immeasurable.

Upon first entering the show, visitors walking down the side aisles of the basilica encounter culturally relevant religious artwork, like paintings depicting St. Margaret Mary Alacoque. A French nun known for her visions of Christ, she kneels before the Sacred Heart in a portrait that AURA has brought to life in golden illuminance. In another painting, light is used to create a St. Joseph and a young Jesus so realistic and lifelike that it feels as if one could almost reach out and touch them. The light projected on these artworks enhances their colors and moves within and around them with dynamic motion.

After viewing the outer parts of the interior, the audience makes its way into the center of the basilica to see the main attraction. Using state-of-the-art projection techniques, the surface of the church is transformed into everything from the starry cosmos to a green forest beneath bright angelic skies. Blissful music elevates the display into a spiritual experience. Encountering the interplay of music, art and light, Catholics and nonbelievers alike may ultimately feel drawn to the Creator.

Light is used to create a St. Joseph and a young Jesus so realistic and lifelike that it feels as if one could almost reach out and touch them.

Light and beauty have always been a central part of the church’s theology and evangelization. Hans Urs von Balthasar saw beauty as a form of God’s revelation in creation. “The beautiful is above all a form (Gestalt) and the light does not fall on this form from above and from outside, rather it breaks forth from the form’s interior,” he writes. “Visible form not only ‘points’ to an invisible, unfathomable mystery; form is the apparition of this mystery, and reveals it while, naturally, at the same time protecting and veiling it.”

In other words, beauty does not come from anywhere else but from eternity, from divinity. Von Balthasar saw the importance of seeing God and beauty not outside of humans, but within creation. God’s beauty is revealed in our daily lives, going to the park, talking to friends or being with loved ones.

Avenues to belief
In the Gospel of St. John, Jesus presents light as a metaphor for a life with him. “I am the light of the world; he who follows me will not walk in darkness, but will have the light of life.” The First Letter of John also pays testimony to this belief: “God is light; in him, there is no darkness.”

Jesus presents light as a metaphor for a life with him: “I am the light of the world."

I briefly “left” the church in my late teen and young adult years. I remember the difficulties that came with returning, particularly being physically inside a church again. Being gone for so long had made the idea of being back in that space intimidating. I had forgotten the traditions of the faith; not only the Mass responses, but what it means to truly love my neighbor as myself. The idea of re-incorporating into my life key aspects of Catholicism seemed to be too difficult a feat. For about four years, I was spiritually removed from the church and had become used to a secular routine in a life without it. Attending a Catholic college helped bring me back to the original love I had for the church. But not everyone has this opportunity.

In a time when church membership has already been declining, the year and a half of pandemic restrictions has solidified this trend. As a result of Covid, fewer people have attended Mass and partaken of the sacraments. It would be a mistake to assume that things will miraculously get better and that this population will return as they grow older.

While the Catholic Church as an institution may be losing many of those who once identified as Catholic, the aesthetic culture created by Catholics is still very much alive. Indeed, Catholic cathedrals and basilicas have become a part of American urban culture. Though few have gone as far as the basilica in Montreal, it is not uncommon nowadays for cities to make an effort to put their major churches on display.

Events like AURA provide a creative avenue to showcase the Catholic faith and add to the already joyous beauty of Catholic churches. It is a new method that allows viewers a glimpse into the embodiment and true expression of Christ within his church. In a place of worship like the Cathedral of Saint Paul, such an event could help visitors understand and see the faith in a completely different way.

This kind of dynamic exhibition could even go beyond large churches within heavily-populated urban cities to suburban and rural church communities. Witnessing a church transformed in such a startling and beautiful way just might be enough to create a spiritual awakening for Christians and non-Christians alike. 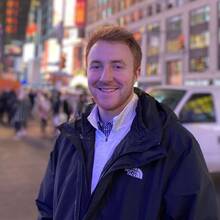 André Wangard is a senior at the University of St. Thomas in St. Paul, Minn., majoring in social studies education.